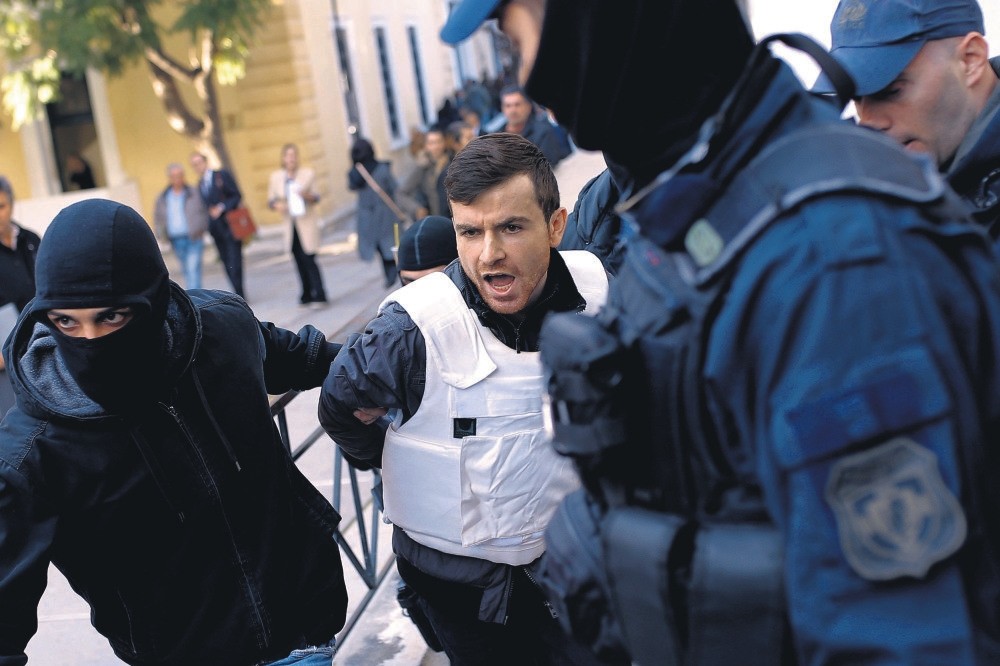 Police escort DHKP-C suspects to the prosecutor's office in Athens.
by Daily Sabah with Reuters Dec 05, 2017 12:00 am

In a sign of improving ties on counterterrorism between Turkey and Greece, a court in Greece yesterday ordered the detention of nine suspects pending trial for their links to the Revolutionary People's Liberation Party-Front (DHKP-C).

Greek police arrested the eight men and one woman in dawn raids in central Athens last week. The nine suspects have been charged with setting up and belonging to a criminal organization, terrorist-related acts of supplying explosive materials, and with illegal possession of firearms, smoke bombs and firecrackers, court officials said.

Police have released the names and photographs of the suspects, who are aged between 20 and 64.

One of the detainees had been wanted by Greek police in connection with an arms and explosives haul off the Greek island of Chios, close to the Turkish coast, in 2013.

Under Greek law, individuals can be held pending trial for up to 18 months. Some of the defendants will apply for asylum in the meantime, their lawyers said.

Based on Greek legal practice, an investigating magistrate will now take over the investigation and a judicial council will finally decide if there is enough evidence to proceed to trial.

Greece and Turkey, though NATO allies, have often been at loggerheads over issues including Aegean territorial rights and the ethnically divided island of Cyprus.

Greece remains one of the countries in which the DHKP-C is very active, and the terrorist group operates a camp, disguised as a refugee camp, located in the town of Lavrion, 60 kilometers southeast of Athens.

The country changed its much criticized policy of tolerance for DHKP-C supporters and a number of militants were arrested in 2014 in several operations, including high-ranking members of the group. The move was seen as improving counterterrorism cooperation between Turkey and Greece, although the refusal of Greek courts to extradite several suspects overshadowed the efforts.

The DHKP-C, in addition to attacks on Turkish security forces, is responsible for a suicide bombing at the U.S. Embassy in Ankara. The incident killed a Turkish security guard and injured a journalist in February 2013.

The detentions came a week before President Recep Tayyip Erdoğan's scheduled visit to Greece, first in more than six decades by a sitting Turkish president to the country. Greek authorities have denied that the operation was linked to the visit.