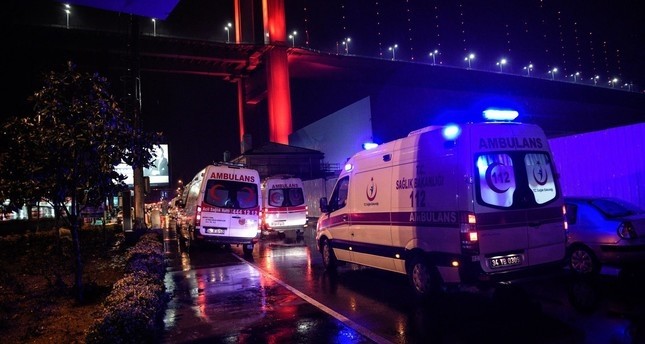 The massacre at Reina nightclub on New Yearu2019s Day by a Daesh militant resulted in the deaths of 39 people, most of whom were foreign nationals.
by Daily Sabah Dec 11, 2017 12:00 am

The trial of 57 suspects, including the shooter who killed 39 people last New Year's at an Istanbul nightclub will begin today

An Istanbul court will begin the trial of 57 suspects implicated in the Reina massacre of New Year's, which caused the deaths of 39 people and the wounding of 79. The perpetrator, Abdulgadir Masharipov, and 51 suspects are in jail pending trial.

Suspected Daesh member Masharipov faces 40 separate life sentences without the possibility of parole in addition to tens of years in jail for those he wounded. When Daesh attacker Masharipov opened fire on partygoers at the Reina nightclub in Istanbul's Ortaköy district early New Year's Day, 39 people, including a police officer, were killed.

Masharipov has already admitted to being a member of the Daesh terror group and told prosecutors that he has a university qualification and is a teacher. He noted that prior to carrying out the Reina terrorist attack he had never been part of any Daesh-sponsored terrorist act. In his first testimony to the court after his lengthy interrogation by police, Masharipov said he was not "an enemy" of Turkey, and he only acted "in retaliation," referring to Turkey's crackdown on the terrorist group active in Iraq and Syria.

Masharipov said when he stormed the Reina nightclub at 1:15 a.m. on New Year's where he randomly fired on revelers, he tried to kill himself, but failed. He said he was given hand grenades but realized they were actually "flash bangs" when he pulled the pin on one near his face to kill himself after mowing down the crowd at the club. "I would kill myself so that I wouldn't fall into the hands [of police]. It was a suicide [attack]," Masharipov added, saying he would "gladly" accept a death sentence. Turkey abolished the death penalty, but Masharipov will likely face life imprisonment without parole.

Though the Uzbek-born terrorist claimed he tried to kill himself, he was found hiding in a residence in the Esenyurt district of Istanbul on Jan. 16 after being on the run for two weeks, along with other Daesh sympathizers after avoiding confrontation with police where he narrowly escaped capture at a checkpoint while he was on the run.

He told police earlier that he originally intended to carry out an attack in Taksim, a popular square in Istanbul, but changed his target after realizing that security was too tight. He also recorded a video days before the attack, declaring his intention to carry out a suicide bomb attack and asking his family to coach his son to be a suicide bomber in the future.

İlyas Mamaşaripov, Abdurrauf Sert, Ali Jameel Mohammed and Masharipov's wife Zarina Nurullayeva also face similar prison terms for aiding and abetting the murderer. The indictment said investigations had led to detailed searches of 152 houses across the country, while 642 foreign nationals detained as part of the operations were deported.

The indictment says that 2,000 police officers were involved in the investigation and that experts had to comb through 7,200 hours of footage to find the suspect. Russian national Islam Atabiev, who was fighting in Syria for Daesh under the pseudonym Abu Jihad, is said to have ordered the attack. In a farewell video he recorded on Dec. 27, 2016, Masharipov told his son to be good to his mother and grow up to be a suicide attack like his father.