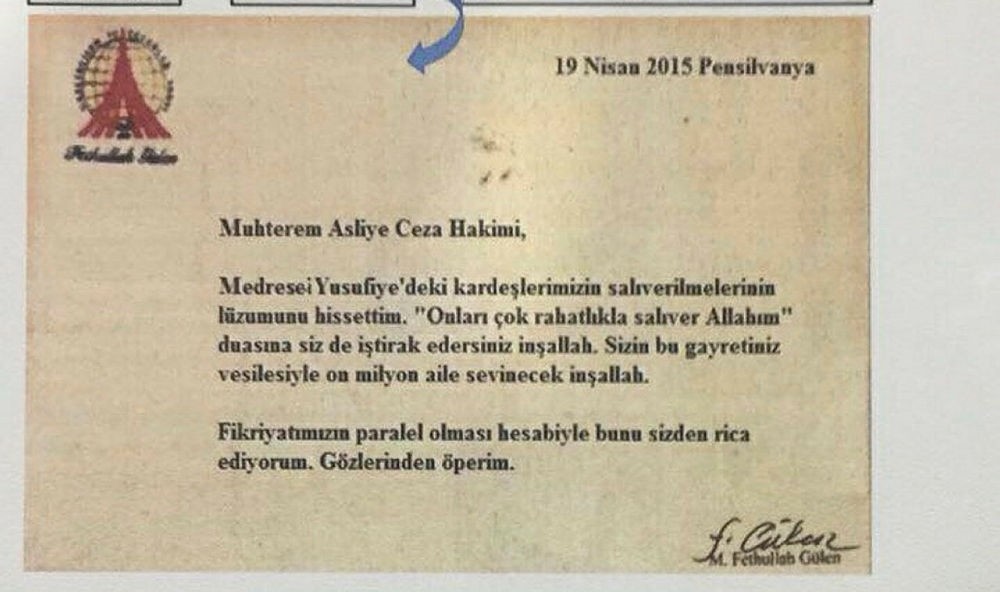 Photo shows the letter allegedly penned by Fetullah Gu00fclen sent to FETu00d6-affiliated judges, which was recently seized by Turkish security officials.
by Daily Sabah Dec 15, 2017 12:00 am

A request signed by the leader of the Gülenist Terror Group (FETÖ), Fetullah Gülen, to judges for the release of all arrested FETÖ members is the most concrete piece of evidence yet, Istanbul Chief Prosecutor Irfan Fidan said Friday.

A letter, leaked on social media on Friday, was allegedly written by U.S.-based Gülen, who reportedly requested FETÖ-affiliated judges to release police officers and other senior figures, including Gülenist Samanyolu TV-owner Hidayet Karaca and fugitive former deputy police Chief Hüseyin Korkmaz, who is currently testifying in the Reza Zarrab trial in New York.

The document, dated April 19, 2015, has an indicated origin of Pennsylvania and Gülen's signature.

"Respected judge of the criminal court, I feel that it is necessary to release our brothers in jail. Inshallah, you will respond our invocation regarding their release. As a consequence of your decision, 10 million families will be rejoiced. I kindly request it from you as our thoughts are analogous," Gülen said in the letter.

Speaking at a press conference, Fidan said the letter was dated April 18, 2015, and was seized during a raid of the residence of the former art director of the now defunct Zaman newspaper, Fevzi Yazıcı. The letter was found inside a trove of digital documents he brought from the U.S.

The prosecutor also named the judges who received the order and followed the instructions of the FETÖ leader, releasing 63 suspects. He said records show Yazıcı entered Turkey after arriving from the U.S. on April 18, 2015, bringing the letter with him along with nearly 100 USB drives with sensitive information about the terrorist group.

Korkmaz, a fugitive former deputy police chief and member of FETÖ, said he met with U.S. prosecutors more than 40 times during the preparations to be a witness in the case against Halkbank deputy CEO Mehmet Hakan Atilla in which Turkish-Iranian gold trader Reza Zarrab has turned state's witness, which whom he is charged with evading U.S. sanctions on Iran. The FETÖ suspects said the meetings "lasted some days for two hours, sometimes four hours and sometimes longer."

During the trial, Atilla's lawyers requested a mistrial in the highly politicized U.S. v. Atilla case regarding the now-lifted U.S. sanctions against Iran. In the motion, the defense criticized the U.S. government's "continuous elicitation of inadmissible, confusing and overly prejudicial evidence. … The defendant Atilla was not charged with any crime in Turkey. There was no evidence that he had either been paid or received a bribe. He was not involved in many of the activities investigated or described in court."

"The defendant has been prejudiced to such a degree that the fundamental fairness of the trial has been irreparably undermined," they said, calling for a mistrial as "the only appropriate remedy."

Korkmaz is testifying in a Manhattan federal court for U.S. prosecutors in the trial of Atilla, who is accused of taking part in a scheme with Zarrab to help Iran evade U.S. sanctions. He has been an important figure in the trial and has made contradictory statements, namely for completely denying that while he was in Turkey he had anything to do with the Dec. 17 and Dec. 25 judicial coup attempt perpetrated by FETÖ to overthrow Turkey's democratically elected government. He later said after coming to the U.S. that he was actually the investigator on the case with eight officers working under his command.

Late Tuesday, Adam Klasfeld, a reporter for Courthouse News, said Korkmaz testified in the trial in New York that the FBI gave him $50,000 of "financial assistance," which he said he had not asked for. Korkmaz, who said he has not been employed in the U.S., also received "help with his rent" from the prosecutor's office, according to his testimony. "I took my wife and my daughter and I left the country that I dearly love," Korkmaz testified. He said he eventually came to the United States with the help of U.S. law enforcement authorities, bringing with him audio recordings and other evidence he snuck out from Turkey.

Meanwhile, Turkish courts on Friday took three people into custody as part of the investigation into Zarrab.

Seventeen suspects were detained in early December as part of the investigation to confiscate Zarrab and his close relatives' assets over charges of espionage. During the probe, three of Zarrab's employees, Sinem Arslan, Regaip Akol and Mustafa Hacısalihoğlu, were detained, and manuscripts containing evidence were seized. In the documents, Zarrab reportedly instructed his employees to discuss with his lawyers a possible way of moving to Dubai after being set free by the U.S. court following a cooperation with the prosecutors on the Iran sanctions case.

Although Arslan, Akol and Hacısalihoğlu remain in custody, 14 other suspects were released by the court.