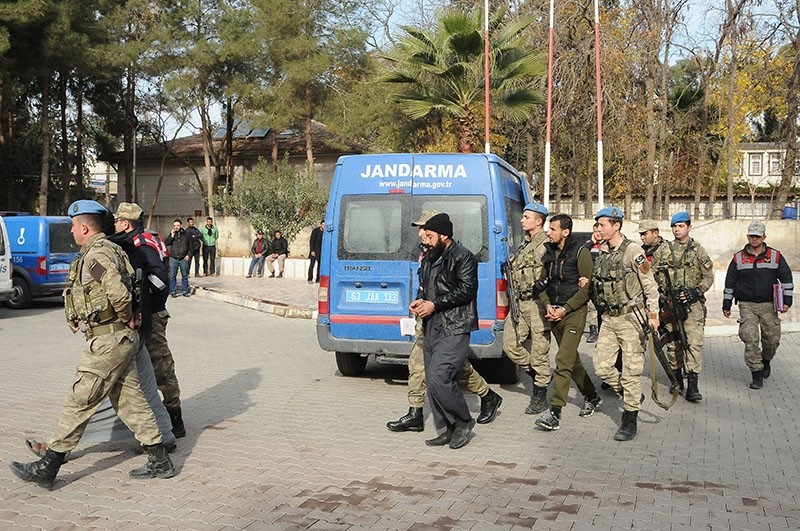 A suspect who was detained in Istanbul in late November for plotting to assassinate high-rank Turkish officials for Daesh terrorist group was arrested Monday by an Istanbul court.

According to a statement by Istanbul Directorate of Security, police units from the Counter-Terrorism Branch detained the suspect, a Syrian national, acting on a tipoff Nov. 25.

The statement said the suspect was planning to cross into Europe if the attack failed or could not be launched and plotted to attack a European bank.

A map showing embassies, consulate generals and several branches of a bank was found among the digital materials seized during the raid.

The suspect, who was first referred to court on Dec. 6, was arrested Monday.

The statement said the suspect, described as a "lone wolf," crossed into Turkey illegally.

Whereas in southern Şanlıurfa province, three Syrian nationals were detained in border districts of Harran and Akçakale for suspected ties to the Daesh terrorist group.

Turkey has been targeted by many deadly Daesh attacks since 2015. Ankara has deported more than 5,000 Daesh suspects and 3,290 foreign terrorists from 95 countries in recent years and has dismantled several terrorist cells that provided logistical assistance in Syria, Iraq and for plotting attacks inside the country.

Turkey's efforts against Daesh made it a primary target for the terrorist group, which has carried out numerous gun and bomb attacks targeting security forces and civilians. This includes the country's deadliest terrorist attack, which killed 102 people and wounded 400 others in a twin suicide bombing at a peace rally in Ankara on Oct. 10, 2015.

Hundreds of Daesh terrorists are headed toward Europe after secretly escaping war-torn Syria thanks to a deal that was struck between the terrorist group and the U.S.-backed Syrian Democratic Forces (SDF), which is mostly made up fighters from the People's Protection Units (YPG) fighters, the PKK Syrian affiliate Democratic Union Party's (PYD) militia.

Security experts have expressed concern that the deal could add to Europe's security woes as Daesh militants could enter mainland Europe via smuggling routes.