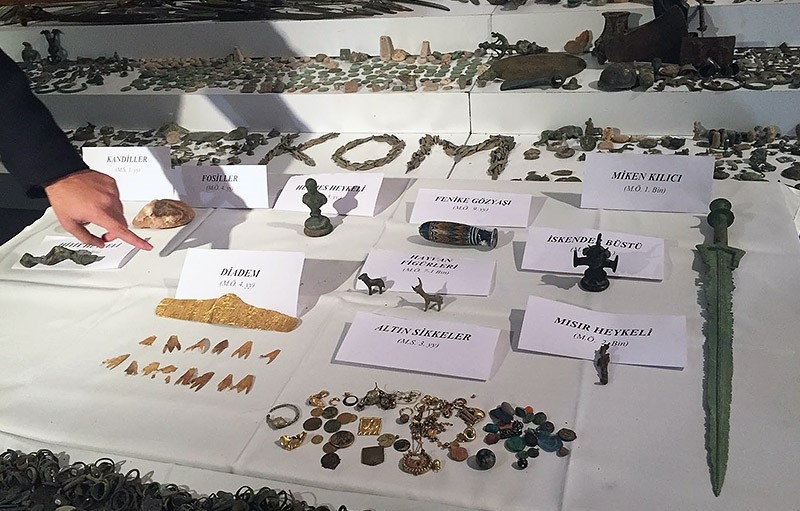 Among the artifacts displayed for the press Thursday was a 3,000-year-old Mycenaean sword attributed to Achilles of Troy fame, a bust of Alexander the Great made upon the order of the ancient king during his India campaign, a queen's crown adorned with golden leaves from the Hellenistic period, ancient coins and a wide variety of other artifacts.

Several fossils, as well as artifacts from Islam's early history in Anatolia were found during the operations.

Security forces had been monitoring the smuggling network for the past three months and launched the first operations on Dec.12.

Acting on the information obtained by the testimonies of captured suspects, they uncovered the identities of more people involved in the smuggling ring. It was unclear how the gang got the artifacts, but security sources said the suspects were planning to smuggle them to other countries. The artifacts will be handed over to the Istanbul Museum of Archaeology.

The sarcophagus, which portrays the 12 labors of Hercules, is now on display in the Antalya Museum. The relic was returned to Turkey following an order by a Swiss public prosecutor in 2015.

It was displayed at Geneva University as part of an agreement between Turkey and Switzerland, and then delivered to Turkey under the sponsorship of national flag-carrier Turkish Airlines.

The country also fights to prevent the smuggling of artifacts to and from Syria, its war-torn neighbor in the south.

Experts say a large number of artifacts were stolen from museums and other facilities amid the turmoil of civil war that started six years ago, and Turkey is among the routes of smugglers who seek to sell them in the country or transfer them to other countries.

Border security and customs officials were recently trained to deal with cross-border smuggling operations, and a list of artifacts missing in Syria were delivered to experts, border officials and private collectors to identify the stolen relics.