In a year of reckoning, 332 sentenced in coup trials 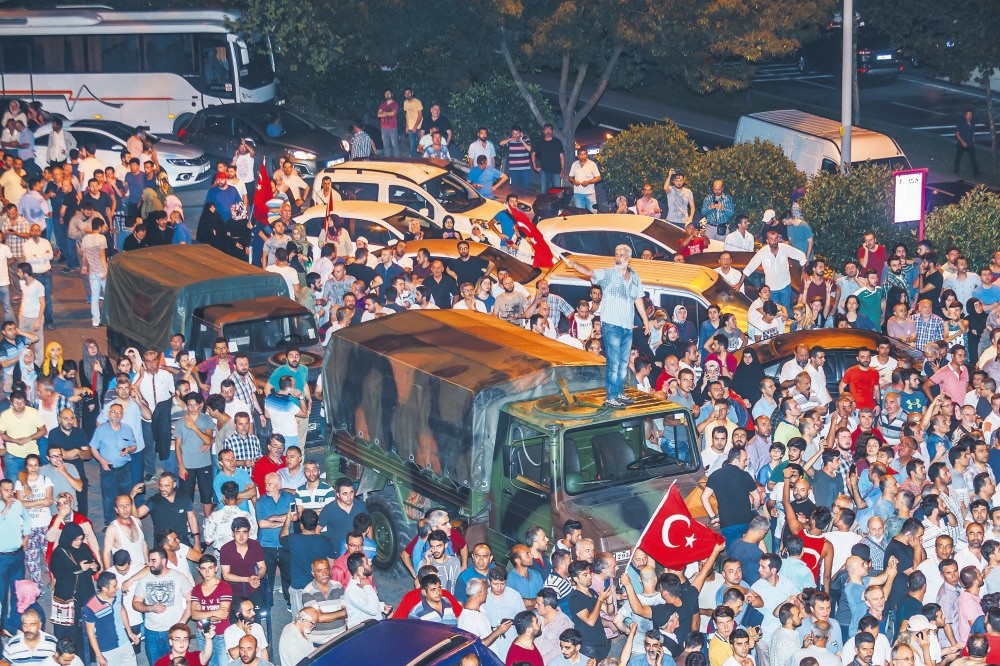 People surround military trucks of putschist troops on July 15, 2016, outside AK Party offices in Istanbul during the coup attempt. Fifteen putschists involved in the takeover of the offices were sentenced to life yesterday.
by Daily Sabah Dec 21, 2017 12:00 am

The year is coming to a close with more sentences in 2016's foiled coup attempt by FETÖ, with 332 people sentenced to life and more lenient prison terms in a year of coup trials across the country

2017 has been a year of reckoning for those involved in the July 15, 2016 coup attempt that killed 249 people and injured hundreds of others.

Figures compiled by Anadolu Agency shows that some 332 defendants were handed down sentences in trials across the country throughout the year and more hearings are underway.

For the coup attempt blamed on infiltrators of Gülenist Terror Group (FETÖ) in the military, 81 defendants, from a general to non-commissioned officers, were handed down aggravated life imprisonment.

Thirty-two defendants were given four instances of aggravated life imprisonment, the harshest term in Turkish laws.

A hundred defendants were handed down prison terms ranging from one year to 20 years for membership of a terrorist group and other crimes.

Since the coup attempt was quelled thanks to a strong public resistance, more than 100,000 criminal investigations have been launched by prosecutors across the country.

So far, 42 trials were concluded with rulings for 502 defendants. Out of those, 115 defendants were sentenced to life imprisonment, while courts acquitted 113 other defendants in trials.

In one of the most significant trials, 31 defendants, including former Brig. Gen. Gökhan Şahin Sönmezateş - who was in the ruling cadres of the coup attempt, according to prosecutors - were sentenced to life for attempting to kill President Recep Tayyip Erdoğan.

Sönmezateş coordinated a team of assassins dispatched to the hotel where Erdoğan was staying at the time of the putsch bid.

The president, who found out about an insurrection bid, escaped the premises with just minutes to spare and traveled to Istanbul where he mobilized the public against the putschists.

In the capital Ankara, where the Parliament, Presidential Palace and other important locations were attacked by putschists, dozens were sentenced in this year's trials.

Eighteen defendants who kidnapped Fahri Kasırga, the secretary-general of the Presidency of Turkey, were handed down aggravated life sentences, while 23 others including Coast Guard Cmdr. Hakan Üstem were sentenced to life in a separate trial.

In another trial, 13 defendants, who stormed the headquarters of satellite operator Türksat in Ankara and killed two Türkstaff employees who were resisting them, were sentenced to aggravated life imprisonment.

In Istanbul, where coup plotters occupied the governorate, a public broadcaster and other critical locations, courts handed down aggravated life sentence to 10 defendants.

A pilot who refused to transport police to guard a presidential residence in Istanbul was also sentenced to life while two former police officers who actively helped putschists were sentenced to aggravated life imprisonment.

The courts in Istanbul and western city of Çanakkale also handed down sentences in yesterday's hearing. Adm. Serdar Ahmet Gündoğdu, who was the commander of military units deployed at Çanakkale Straits at the time of the coup, was sentenced to life.

Gündoğdu was among commanders who obeyed orders sent by putschists who captured the army headquarters in Ankara. He was detained two days after the attempt was quelled.

In Istanbul, a court sentenced 15 defendants, including two majors, to life imprisonment for attempting to occupy the Istanbul offices of the ruling Justice and Development Party (AK Party). Majors and two other officers were handed down aggravated life sentences while the rest was sentenced to life imprisonment.

Since the coup attempt, tens of thousands of suspects have been detained or arrested for their links to the group and a large number of people have been dismissed from their public sector jobs for association with FETÖ.

FETÖ is accused of orchestrating multiple coup attempts in Turkey, and its members face terrorism charges. The group runs a network of schools and companies spanning the globe.

FETÖ posed as a religious charity for decades and planted its infiltrators in the law enforcement, judiciary, bureaucracy and military meanwhile.

When the group moved to seize power by implicating people close to the government in a criminal probe four years ago, the government designated it "a national threat."

The group's U.S.-based leader Fetullah Gülen denies involvement in the 2016 coup bid but evidence shows all key figures in the attempt are closely associated with him and his self-styled "Hizmet" movement.

Adil Öksüz, a point man for Gülen, is accused of masterminding the coup attempt and coordinating group's infiltrators in the military for this reason.

Öksüz remains at large while Kemal Batmaz, an executive of a FETÖ-linked company who is allegedly a co-conspirator, was jailed after he was captured at the Akıncı Air Base in Ankara which was used as command center during the coup attempt.