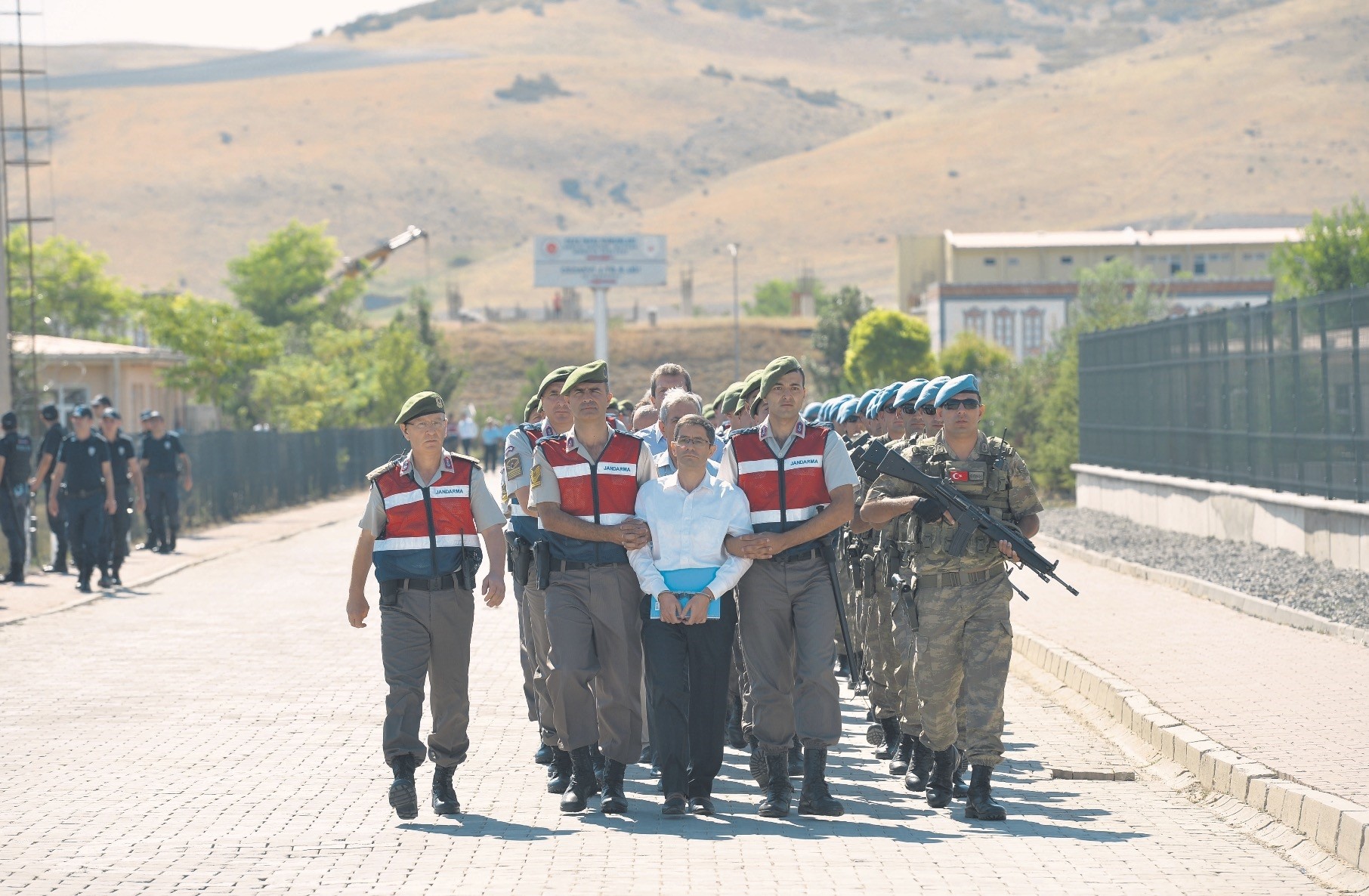 Gendarmerie officers escort Kemal Batmaz and other defendants to the courtroom for a coup trial. Batmaz is one of the alleged masterminds of the coup bid for FETu00d6 and was captured at Aku0131ncu0131 Air Base.
by Daily Sabah Jan 01, 2018 12:00 am

As Turkey will mark the second anniversary of a deadly coup bid by FETÖ this year, more verdicts are expected in critical coup trials though key figures of the attempt remain elusive

As the public expects swift justice for the deadliest coup attempt in recent memory that killed 249 people, the new year may bring in more relief for surviving victims and those killed while resisting the bid. Hundreds more are expected to be sentenced, possibly to life, in coup trials across the country. Nevertheless, key figures behind the insurrection attempt on July 15, 2016, namely those who devised it on behalf of the Gülenist Terror Group (FETÖ), are still at large. More than 330 people, mostly high-ranking military officers, were already sentenced to life in 2017's trials on the putsch bid and many more were handed down more lenient sentences for links to FETÖ.

Except a trial on a team of would-be assassins dispatched to kill President Recep Tayyip Erdoğan, most of the concluded trials were small-scale ones where the defendants' actions during the coup attempt were limited.

One of the trials whose conclusion is anticipated most is the Akıncı Air Base trial where 486 suspects currently sit on the dock. The trial in Ankara delves into the actions of pro-coup troops at the eponymous base, which is viewed as the heart of coup attempt. It was there the putschists' Peace At Home Council coordinated nationwide efforts to seize power. On the night of July 15, warplanes took off from the base to strike targets in Ankara, from the Presidential Palace to Parliament. It was also that base where Chief of General Staff Gen. Hulusi Akar and other top military brass opposing the insurrection attempt were kept as hostages.

Akın Öztürk, a former Air Force commander who retained a post in the Supreme Military Council, which oversaw key appointments in the army, was captured in the base while aiding the coup plotters. Prosecutors accuse him of being the commander of the coup attempt. The majority of the defendants testified in the trial that started on Aug. 1, 2017 had denied the coup charges, puzzling the judges. Many claimed they were in the base by sheer coincidence while others defended themselves by "merely obeying the orders of their superiors." Öztürk himself said he was there to convince putschists to end the attempt and that he had "an ill-fitting uniform" at the base and he came in plain clothes for that reason. He said the coup attempt was the work of the FETÖ and was endorsed by "foreign powers" that he avoided openly naming.

Almost every defendant in coup trials across the country has denied their links to FETÖ despite evidence showing close ties between putschists and the terrorist group. Prosecutors say Fetullah Gülen, the U.S.-based leader of the group, ordered the plan to seize power through the group's infiltrators in the army, from noncommissioned officers to high-ranking generals.

Adil Öksüz, a theology lecturer who served as Gülen's point man, arranged the coup plot according to prosecutors who say Öksüz and generals held meetings in an Ankara villa to discuss the details of the plot. Öksüz remains at large but Kemal Batmaz, Harun Biniş, Hakan Çiçek and Nurettin Oruç, other "civilian" FETÖ members who aided in the coup attempt, are among the defendants in the Akıncı trial after they were captured in the base on July 15, 2016. Öksüz is among the few suspects who disappeared after the coup attempt after he was controversially released hours after his detention at Akıncı.

Ankara has placed Öksüz in the red category of the country's most wanted terrorism suspects, offering a reward of up to TL 4 million ($1.1 million) for tips leading to his capture. Referred to as the "black box" of FETÖ, Öksüz reportedly acted as the Air Force leader for the terrorist group, which is known for its widespread infiltration of the military.

Authorities believe Öksüz likely fled abroad and last year, he was sighted in Germany according to Turkish media outlets. German authorities were reportedly looking for claimed sightings of Öksüz in several German cities.

It remains to be seen if he will be located if he is abroad though the government also believes that he might have been killed by FETÖ after he disappeared following one last visit to his hometown in northwestern Turkey shortly after the coup attempt.

Gülen had claimed he was not involved in the attempt though investigators found out he secretly instructed his followers to seize power and multiple evidence shows most officers in the coup attempt were associated with FETÖ. Turkey seeks extradition of Gülen from the U.S. or at least arrest him to prevent his escape. Washington has been reluctant last year on the matter though extradition of such a high-profile suspect like Gülen is also a lengthy process.

In 2017, more than 40 trials were concluded for over 500 defendants and more than 110 people were acquitted. The acquittals were confined to low-ranking officers and conscripts who did not know that they were following the orders of pro-coup commanders.

Since the coup attempt, tens of thousands of suspects have been detained or arrested for their links to the group and a large number of people have been dismissed from their public sector jobs for association with FETÖ.

FETÖ is accused of orchestrating multiple coup attempts in Turkey, and its members face terrorism charges. The group runs a network of schools and companies spanning the globe. The terrorist group posed as a religious charity for decades, meanwhile planting its infiltrators in the law enforcement, judiciary, bureaucracy and military. When the group moved to seize power by implicating people close to the government in a criminal probe four years ago, the government designated it "a national threat."