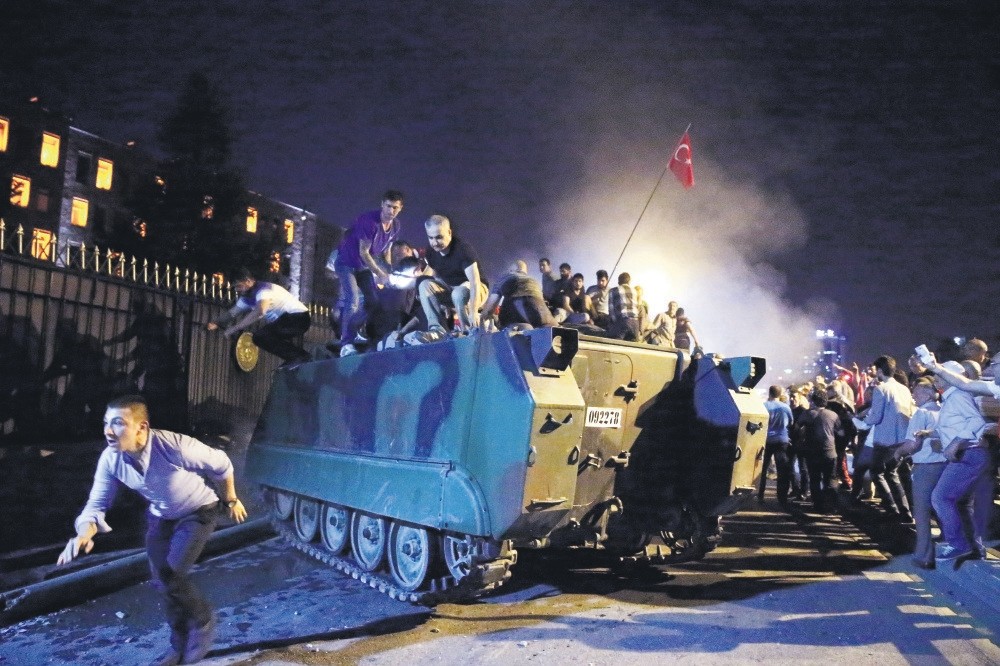 An anti-coup crowd surround and capture a tank hijacked by putschists outside the main military headquarters in Ankara. Putschists had captured several strategic locations in the capital, including the Tu00fcrk Telekom building, on July 15, 2016.
by Daily Sabah Jan 12, 2018 12:00 am

A court in Ankara yesterday handed down life sentences to 28 former soldiers for the takeover of telecom provider Türk Telekom during the July 15, 2016 coup attempt, blamed on military infiltrators from the terrorist group FETÖ

The soldiers were among hundreds currently on trial for the July 15, 2016 coup attempt that killed 249 people resisting it. The putsch bid is blamed on the Gülenist Terror Group (FETÖ) that tried to seize power through its infiltrators in the military after two unsuccessful attempts in 2013.

The company's headquarters in Ankara's Ulus district were among the strategic places targeted by the coup plotters who also tried to seize the telecom's main building in Istanbul. Before special operations police accompanied by anti-coup civilians surrounded the building, the soldiers stayed in the building for hours, while Ömer Ergenekon, a former lieutenant colonel who headed the group invading Türk Telekom, managed to flee. Most defendants were lieutenants who were cadets at a prestigious military academy. They had claimed that they were not aware of a coup plot and were simply following Ergenekon's orders. A busload of pro-coup troops stormed the building at 10:17 p.m. on July 15, 2016, as seen on security camera footage. They disarmed the security guards at the entrance and threatened employees inside. Eyewitnesses have told investigators that Ergenekon announced that the "Turkish army" had taken over the country's governance and threatened to "shoot" any people leaving the building. Some personnel were later allowed to leave, while a group of employees were held hostage for hours.

Türk Telekom maintains the country's Internet infrastructure, and coup plotters were planning to cut off communications, as they tried to do at Türksat, an Ankara-based satellite operator that controls nationwide broadcasting. Ultimately, they failed to turn off the well-protected systems. The Internet was key for the country's leaders to contact the public. Erdoğan's now-famous FaceTime call-in to TV stations is credited with mobilizing the public against the coup plotters. Throughout Turkey, people took to the streets to confront the putschists, preventing them from leaving military bases or intimidating them into leaving the places they occupied.

Since the coup attempt, tens of thousands of suspects have been detained or arrested for their links to FETÖ, while a large number of civil servants have been dismissed from their jobs for their association with the group.

FETÖ is accused of orchestrating multiple coup attempts in Turkey, and its members face terrorism charges. According to prosecutors, the group used its infiltrators in the military to run the coup attempt, overseen by its nonmilitary point men.

In 2017, more than 40 trials involving over 500 defendants were concluded. Some 110 individuals were acquitted, but more than 330 people, mostly high-ranking military officers, were sentenced to life. Many others were handed more lenient sentences for their FETÖ links.