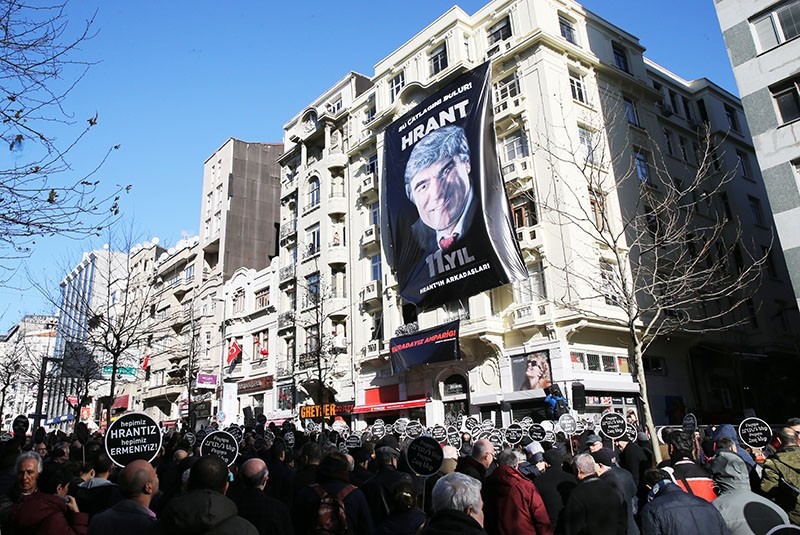 As the trial of FETÖ-linked police officers began for covering up the murder plot of Turkish Armenian journalist Hrant Dink, a large crowd gathered at the spot where was killed in 2007

A large crowd carrying banners "We are here, Ahparig [brother]" once again gathered at the spot where Hrant Dink, a prominent Turkish Armenian journalist, was killed 11 years ago.

The murder, which sparked a national outrage and unexpectedly bound a public haunted by the thorny issue of Armenian "genocide," was suspected to be a Gülenist Terror Group (FETÖ) plot.

Several former police chiefs are on trial for an alleged cover-up of the murder plot while a teenager who shot Dink dead is already convicted of the killing.

The 53-year-old journalist was walking to the offices of his Turkish & Armenian bilingual daily, Agos when a young man, later identified as Ogün Samast, approached him and shot Dink three times. His murder sparked a public outrage in Turkey, as he was thought to have been murdered because of his ethnic identity and outspoken editorials.

Dink, a Turkish-Armenian, was at the forefront of reconciliation efforts between Turks and Armenians, who have been at odds over the alleged genocide of hundreds of thousands of Armenians during the World War I by Ottoman forces.

He was known for his criticism of both sides but ultimately drew the ire of ultranationalists. Though he complained of death threats before his murder, it was later claimed that Ogün Samast was "brainwashed" by a police informant to commit the murder.

It was a closed case if not for some new revelations and the insistence of Dink's family that a larger network was involved in the murder. Ultimately, former police chiefs linked the terrorist group FETÖ were detained for covering up information on the murder.

FETÖ, which is also blamed for the failed military coup attempt in 2016, has also been linked to efforts to thwart a thorough investigation of the murder. Some prosecutors and judges handling the case were later removed from their posts and detained for their links to the terrorist group. A hearing of the trial, which implicates 85 people including 10 at large, is scheduled for later this month.

Fetullah Gülen, the U.S.-based leader of FETÖ, is among defendants, along with former police intelligence chiefs Ramazan Akyürek and Ali Fuat Yılmazer.

The defendants have blamed each other for negligence in investigation and dismissal of tip-offs.

Prosecutors said that the terrorist group, through a gang prosecutors and police, looked to put the blame on Ergenekon and imprison critics of the group by linking them to it.

Yetvart Danzikyan, current editor-in-chief of Agos, says the trial may take long but it did not matter for them as long as it finds "those who ordered the hit on Dink."

Speaking to Anadolu Agency (AA), Danzikyan said "it is hard to describe" Hrant. "He is irreplaceable. He had ideals and paid the price for dreaming of accomplishing these ideals."

He said Dink's death has been a great loss for Turkey and its people. "He removed the lid of silence in the Armenian community."

Danzikyan hoped that along with culprits, the investigation will also look into who targeted Dink.

"The current trial is also important. It revealed that a group plotted the murder eleven months before his death. This is a multi-dimensional case like other similar murders," he says, pointing out to the killings of prominent journalists and academics in the 1990s.

Hakan Bakırcıoğlu, the lawyer for the Dink family, told AA that a comprehensive investigation should have been carried out the year the journalist was murdered but it took another seven years.

"Though the indictments [on police chiefs and other public officials] came much later, we still appreciate it," he said.

Bakırcıoğlu said that they now expect their plea for investigation of people involved "in the process that led to the murder of Dink" to be approved by courts.

"There is a strong possibility that people linked to FETÖ played a role in masterminding this murder," he added.
Last Update: Jan 19, 2018 6:02 pm
RELATED TOPICS