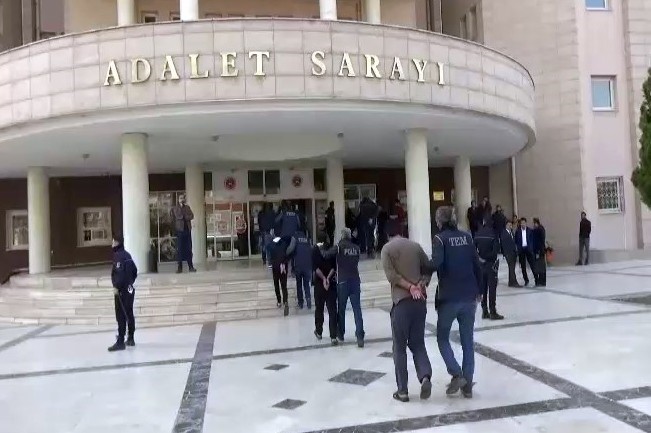 Thirteen Daesh suspects, including two with international arrest warrants, were arrested by police soon after crossing into Turkey from a YPG-controlled region in Syria

Police in the southeastern province of Şanlıurfa have arrested 13 Daesh-linked terrorist suspects, including senior officials sought with a red notice, who illegally crossed the border through the PKK-linked People's Protection Units (YPG)-controlled territory, reports said Wednesday. According to security sources, counterterrorism and intelligence units of the Şanlıurfa police launched an operation after receiving intel that a group of Daesh terrorists crossed into Turkey from Syria, with the help of YPG-linked smugglers.

In the operations, police detained 12 terrorist suspects and two Syrian nationals who provided assistance in crossing the border.

One of the suspects, identified as Dr. Kefah Basheer Hussain, told police that he is the senior health official for Daesh. He said he is a rheumatologist and that there are six to seven other health officials responsible for the terrorist group.

Hussain also mentioned that he cooperated with the YPG, and that the latter demanded a cease-fire from Daesh around four months ago.

He said the YPG told Daesh terrorists that they can leave and take any vehicles and weapons that they have.

There were Interpol red notices for the Dutch national identified as Xaviera Rose-Claire Swagemakers and the Algerian national who also lived in the Netherlands, identified as Mokhtar Mekkaoi, reports said.

Thirteen of the 14 suspects have been detained by the court and one was released.

Ankara has deported more than 5,000 Daesh suspects from 95 countries in recent years and has dismantled several terrorist cells that provided logistical assistance in Syria and Iraq and for plotting attacks inside the country.

Turkey has seen many deadly Daesh attacks since 2014.

The first Daesh attack took place on March 20, 2014, when terrorists killed a police officer and three soldiers in a shootout in the central province of Niğde. The assailants were German national Benjamin Xu, Swiss citizen Çendrim Ramadani and Macedonian national Muhammed Zakiri.

Later that year, when Daesh occupied the Turkish Consulate in Mosul, Iraq, the group took 19 staff, including Consul-General Öztürk Yılmaz, and 30 security guards hostage, before releasing them 101 days later.

On Jan. 6, 2015, Diana Ramazanova, an 18-year-old Russian national from Dagestan who was a widow of a Norwegian terrorist, killed herself and police officer Kenan Kumaş and wounded two other officers when she set off a grenade at a police station in Istanbul's historic Sultanahmet district.

Afterward, Daesh started to target civilians, planning attacks to have massive casualties. Trying to cause social disturbances, Daesh deliberately targeted the Peoples' Democratic Party's (HDP) campaign rallies prior to the June 7, 2015 parliamentary elections. On June 5, 2015, an attack at a HDP rally in Diyarbakır killed four people and injured hundreds more.

Another suicide attack among a crowd of HDP supporters on July 20, 2015 in the southeastern town of Suruç killed 32 people and wounded more than a 100. This suicide bombing was followed by the deadliest in Turkish history. On Oct. 15 the same year, two suicide bombers linked to Daesh targeted a crowd of leftist, anti-war demonstrators in Ankara, killing 102 people and injuring over 400.

In 2016, Daesh started to target foreign nationals. On Jan 12, 2016, a 28-year-old Daesh terrorist carried out a suicide bombing in Istanbul's historic Sultanahmet Square, killing 13 German tourists and injuring 16 others, including 11 foreign nationals. On March 19, A Daesh terrorist detonated a suicide belt on Istanbul's renowned Istiklal Avenue, killing five people and injuring 36 others. The target of this attack was an Israeli tourist group.

Despite heavy security, four Daesh terrorists carried out an attack at Istanbul's Atatürk International Airport on June 28, 2016, killing 35 and injuring more than 100 people. Two of the four attackers were suicide bombers. The attack resembled the attack on Brussels Zaventem Airport and Maalbeek subway station in March that killed 32 people.

A Daesh terrorist targeted a wedding in the Gaziantep province on Aug 20, 2016, killing 54 people, most of whom were children between the ages of 12 and 14.

On New Year's Eve of 2017, Abdulgadir Masharipov opened fire on partygoers at the Reina nightclub in Istanbul's Ortaköy district, killing 39 people, including a police officer.