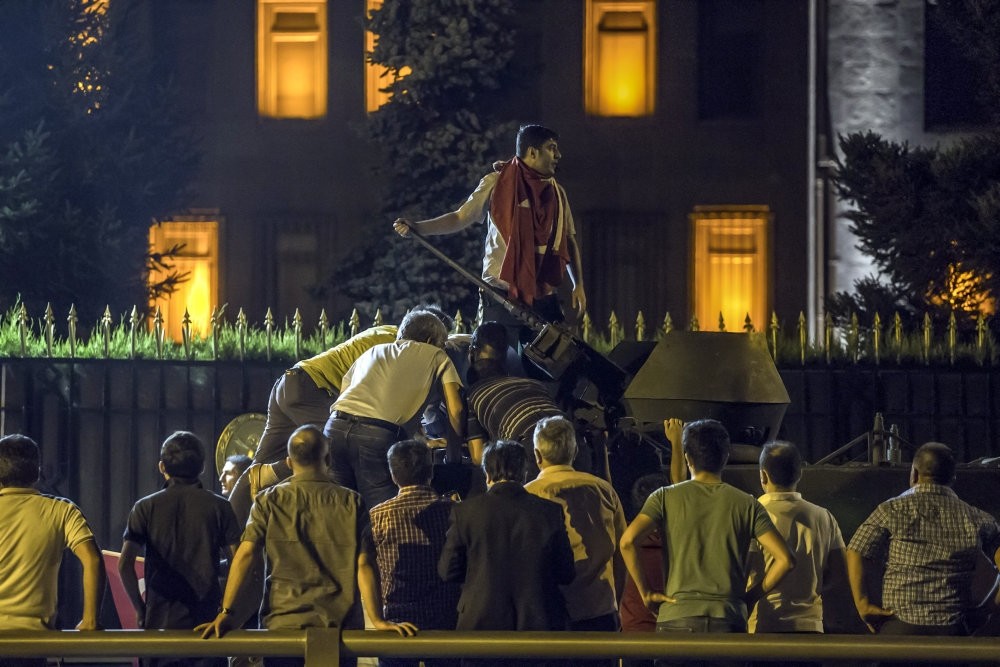 Anti-coup civilians stop a tank commanded by putschists outside military headquarters in Ankara on July 15, 2016. Putschists attacked the headquarters as well as the Parliament and Presidential Palace in Ankara.
by daily sabah Feb 03, 2018 12:00 am

A court in Ankara handed down life sentences to 21 former military officers who were all members of FETÖ deployed at an air base in the capital, for their role in the 2016 coup attempt

In the latest verdict in coup trials, a court in the capital Ankara sentenced 21 defendants to aggravated life and life sentences for their roles in the 2016 coup bid carried out by the Gülenist Terror Group (FETÖ). The suspects, all military officers, were deployed at an air base operated by the army's elite Special Forces. They were accused of taking over the base from anti-coup officers and coordinating flights to attack other military bases in the capital.

Among those who were sentenced to aggravated life sentences were two officers deployed at the Etimesgut Special Air Regiment Command base. Halit Kabil and Dursun Varlı kidnapped another officer who was resisting the putsch bid and held him in another base throughout the coup attempt. They also arranged a flight for Semih Terzi, a general who was assigned to take over the command of the Special Forces headquarters.

A total of 27 defendants were on trial since last year and the court ruled for another trial for five defendants while handing down a 12-year sentence to one defendant.

Since the coup attempt, tens of thousands of people have been arrested or detained for suspected links to the coup attempt and FETÖ. So far, more than 300 offenders have been sentenced to prison in coup trials.

More trials are expected to wrap up later this year while the main trial on the takeover of the office of the Chief of General Staff, in which 221 defendants are being tried, is still underway.

Led by its U.S.-based leader Fetullah Gülen, the group long disguised itself as a religious charity before it moved to seize power in Turkey with two coup attempts in 2013 using its infiltrators in law enforcement and the judiciary. After the 2013 attempts, Turkey designated it as a national threat and escalated a crackdown on the group.

Meanwhile, prosecutors in Ankara have issued arrest warrants for 40 suspected members of FETÖ as part of a probe into cheating in a police exam. Twenty-one of those suspects were arrested in operations in 27 provinces when Daily Sabah went to print. The suspects are accused of secretly obtaining questions and answers to a 2011 exam for rank promotion in law enforcement, with the assistance of fellow FETÖ members. Law enforcement was heavily infiltrated by Gülenists for years before a purge began in late 2013 to weed out FETÖ-linked officers.

Prosecutors in cases about FETÖ say officers linked to the group were involved in a string of crimes for the benefit of the group, from illegal wiretapping of hundreds of people for blackmail and intelligence purposes, to forging evidence and imprisoning its critics.