64 sentenced to life in latest verdict in FETÖ coup trials 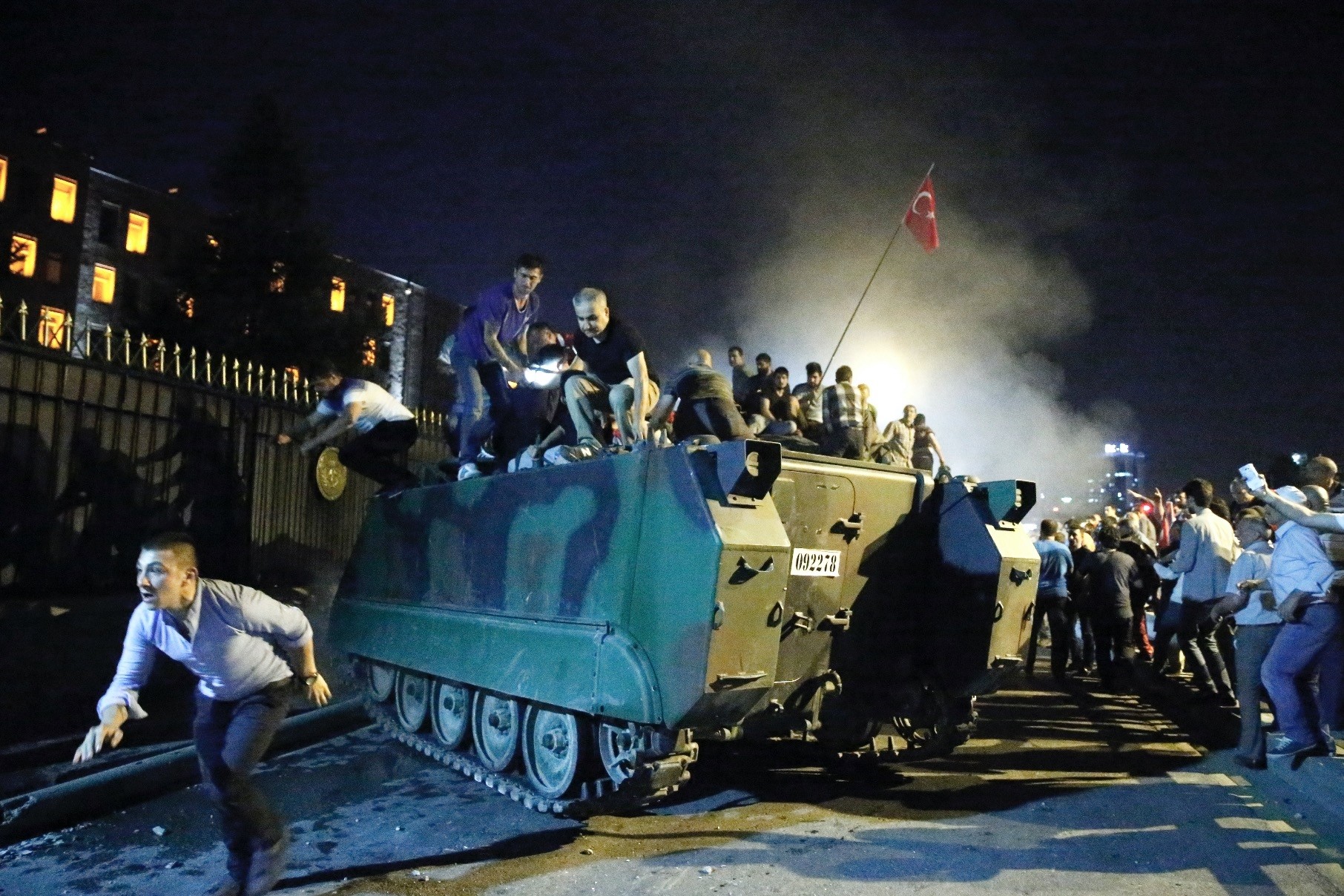 Anti-coup protesters stop a tank outside the military headquarters in Ankara on July 15, 2016. Some defendants sentenced to life in yesterdayu2019s trial were sent there by coup plotters in a bid to take it over.
by Daily Sabah Feb 08, 2018 12:00 am

Two years after the July 15 coup attempt, a court in the capital Ankara sentenced four defendants to aggravated life imprisonment and 60 others to life imprisonment for their role in the deadly bid. The court also ordered the release of 100 others in the same case.

All defendants were soldiers deployed at the Land Forces Command's military school. They were accused of taking over the school from anti-coup military officers they held hostage and dispatching troops to other locations in Ankara to aid fellow putschists. Cadets at the school have claimed that they were forced by their pro-coup commanders to board helicopters that took them to the office of the Chief of General Staff in the military headquarters. They were captured there by security forces that quelled the putsch bid. Chief of General Staff Gen. Hulusi Akar and other top military brass were captured and held hostage by putschists on July 15, 2016, while the headquarters were taken over by pro-coup troops from an elite military unit.

The 100 defendants released by the court were cadets of the rank of lieutenant who were attending the school for a promotion in rank. The court ruled that the cadets had no link to FETÖ and were dispatched to the army headquarters "armed with guns that had no ammunition" by their pro-coup commanders. The ruling said the released defendants were "tricked by (pro-coup officers)" to go to the Office of the Chief of General Staff as they were told that they would be taken to "a safe zone" during the coup attempt.

The verdict comes one week after 21 defendants were handed down aggravated life and life sentences in another coup trial in Ankara for their roles in the coup bid. More than 300 people have been sentenced in coup trials since they began in late 2016.

Since the coup attempt, tens of thousands of people have been arrested or detained for suspected links to the coup attempt and FETÖ. More trials are expected to wrap up later this year while the main trial on the takeover of the office of the Chief of General Staff, in which 221 defendants are being tried, is still underway.

Led by its U.S.-based leader Fetullah Gülen, the group long disguised itself as a religious charity before moving to seize power in Turkey with two coup attempts in 2013 using its infiltrators in law enforcement and the judiciary.

After the 2013 attempts, Turkey designated it as a national threat and escalated a crackdown on the group.