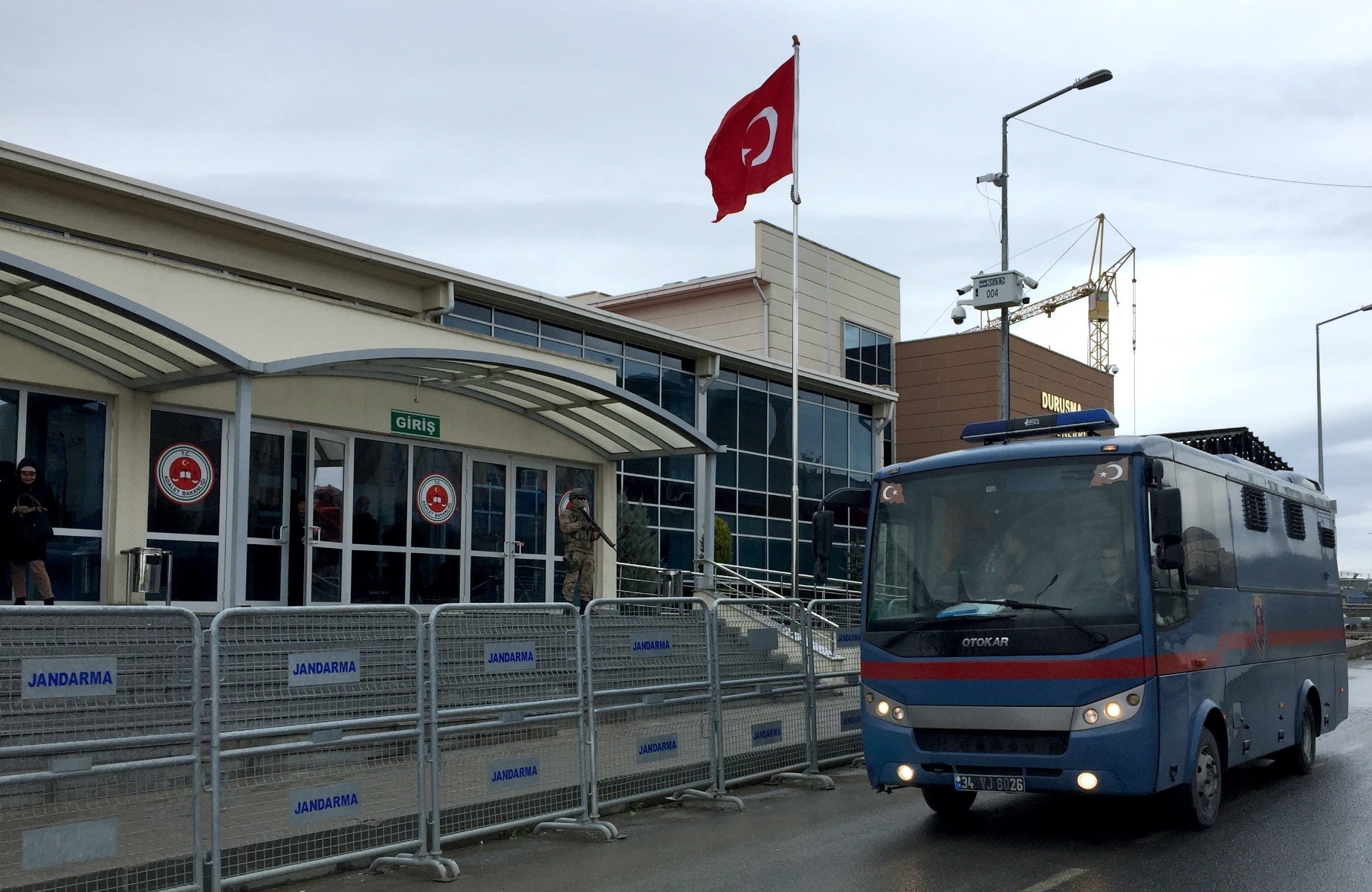 A prison van parked outside the courthouse in Silivri where major coup trials in Istanbul are being held. Hundreds were implicated in the trials on the coup attempt that killed 249 people across the country in 2016.
by Daily Sabah Feb 16, 2018 12:00 am

Prosecutors asked an Istanbul court to sentence 99 people to aggravated life imprisonment for their involvement in the July 15, 2016 coup attempt that killed 249 people. The defendants are military officers that were part of the nationwide coup's Istanbul leg. Authorities blame the Gülenist Terror Group (FETÖ) for the putsch bid, citing that the group used its infiltrators in the military to seize power.

Sixty-three defendants were part of a military convoy sent by putschists to Istanbul when they were stopped at a toll road in Tuzla, a district on Istanbul's Asian side. The crowd made up of civilians was trying to convince the putschists to lay down arms. Six people, including a police officer, were killed by putschist troops who opened fire on the crowd both in Tuzla and nearby Sultanbeyli districts. The defendants are being tried at a court adjacent to a large prison complex holding the coup bid suspects in the city's Silivri district. Prosecutors asked the court to impose sentences on the defendants on charges of violating the constitutional order as well as homicide. The trial was adjourned to April for the final pleas by the defendants.

In another trial in Istanbul, prosecutors asked 36 defendants out of 40 to be sentenced to aggravated life imprisonment for taking part in coup attempt at a school to train infantry officers in Tuzla. The suspects had left the school they were deployed at in order to join other pro-coup troops who attempted to take over Istanbul but returned to the school upon a strong public resistance to the putsch bid. A former major among the defendants remains at large.

Coup trials have been underway across Turkey since December 2016, but only a small fraction of cases have ended.

Istanbul was one of the key cities the coup plotters sought to capture. Thirty-four civilians were killed when they confronted the putschists taking over a bridge connecting the city's Asian and European sides. Last year, a court in Istanbul handed down life sentences to 28 former soldiers for trying to take control of Istanbul's Sabiha Gökçen International Airport on the Asian side.

FETÖ is accused of orchestrating multiple coup attempts in Turkey, and its members face terrorism charges. According to prosecutors, the group used its infiltrators in the military to run the coup attempt, overseen by its nonmilitary point men. Led by its U.S.-based leader Fetullah Gülen, the group long disguised itself as a religious charity before moving to seize power in Turkey with two coup attempts in 2013 using its infiltrators in law enforcement and the judiciary. After the 2013 attempts, Turkey designated it a national threat and escalated a crackdown on the group.

The terrorist group faces almost daily operations against it across Turkey. Yesterday, six suspects, all members of the large Boydak family who once controlled a business empire in the Anatolian heartland, were detained for links to the terrorist group. They are accused of funding Bank Asya, a now-defunct lender controlled by FETÖ. Operations were underway in Kayseri, where the family's Boydak Holding headquarters is located, to capture three other suspects in the case. Most family members who served as senior executives of Boydak Holding are already imprisoned and being tried for membership of the terrorist group. They are accused of financing the terrorist group through their business conglomerate.