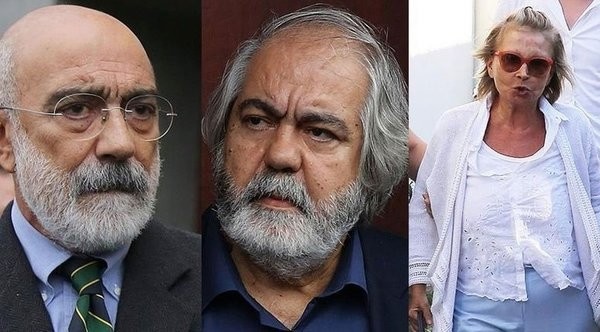 A Turkish court handed aggravated life sentences for six defendants, including Nazlı Ilıcak, Mehmet Altan and his brother Ahmet who were accused of serving as the media arm of the Gülenist Terror Group (FETÖ) that is blamed for the July 15, 2016 coup attempt that killed 249 people across Turkey.

The remaining defendants sentenced for attempting to overthrow the constitution are Fevzi Yazıcı, Yakup Şimşek and Şükrü Tuğrul Özşengül. They are among hundreds facing the same charges in separate trials after the terrorist group, through its infiltrators in the military, sought to seize power in the country.

The terrorist group is accused of masterminding the foiled coup attempt with the aid of its infiltrators in the military who allegedly carried out a plan personally approved by Fetullah Gülen, the U.S.-based leader of the terrorist group. Prosecutors say Ilıcak, Ahmet and Mehmet Altan had contacts with five civilians captured at Akıncı Air Base, which served as a command center for the putschists on July 15, 2016. The civilians were Adil Öksüz, Kemal Batmaz, Hakan Çiçek, Nurettin Oruç and Harun Biniş. After Gülen, Öksüz is the most wanted figure in the coup cases. A theology lecturer by profession and a senior FETÖ figure, Öksüz is accused of planning the coup attempt in meetings with generals loyal to the terrorist group. He was controversially released by judges believed to be linked to FETÖ after his initial capture at the base and then disappeared. Batmaz, another civilian found at the base after the coup attempt, is accused of being an accomplice of Öksüz.

Yazıcı was the former visual director of Zaman daily, the main Gülenist publication, whereas Şimşek was the marketing director of the same newspaper. Zaman was assigned trustees by a court order in March 2016 over its ties to the terrorist group and shut down in July 2016.

Özşengül, a former Police Academy lecturer, claimed in a live TV program of a U.S.-based Gülenist TV broadcaster on the night of July 15 that police forces would not resist against the coup attempt. He was a frequent participant of TV shows by Gülen-linked broadcasters, including now-defunct Samanyolu, on issues of police and security. During a hearing of the media arm trial, Özşengül also testified that his father was a torturer working in the ranks of the police during the Sep. 12, 1980 military coup.

The defendants were arrested following the coup attempt. The case is the first of its kind for journalists linked to the coup. Ten other defendants in the case will be separately tried as they still remain at large. Ekrem Dumanlı, the former editor-in-chief of FETÖ mouthpiece Zaman, former journalist Emre Uslu and writer Tuncay Opçin, all known for their barrage of pro-FETÖ propaganda on social media, are among the fugitive suspects in the case and face life imprisonment on coup charges. Uslu, Opçin and Dumanlı were spotted in the United States following their disappearance after arrest warrants were issued in their names.

Şemsettin Efe, the Washington representative of the Samanyolu, is another defendant at large. On the night of the coup, Efe showed keen support for FETÖ in live online broadcasts.

Professor Osman Özsoy, a fervent supporter of the terrorist group and among the defendants of the case, made headlines for statements he made on a TV show one month before the coup attempt took place. "I wish I could have been a colonel. I would be more helpful to the process," Özsoy cryptically said while discussing the challenges the Gülenists faced.

Other suspects include Mehmet Kamış, the deputy editor-in-chief of Zaman, which was appointed trustees before the coup attempt for its links to the terrorist group; its Israel correspondent Abdülkerim Balcı; and Bülent Keneş, editor-in-chief of Today's Zaman, the English language version.

The terrorist group once wielded considerable clout in the media where it ran a broadcaster. The group owned several TV stations, published newspapers and magazines that disseminated the group's propaganda and had several radio stations. Most were closed down as part of the crackdown on FETÖ and were handed to trustees as the legal process against FETÖ members got underway. The media was key for Gülen to spread his messages to followers. Gülen, who faces extradition from the U.S., is already implicated in a string of criminal cases including those on the coup attempt carried out by his followers in the military and sham trials against his critics. Since December 2013, when FETÖ emerged as the perpetrator of two coup attempts, FETÖ has been regarded as a security threat. Prosecutors claim that the group's infiltrators in law enforcement, the judiciary, bureaucracy and the military had waged a long-running campaign to topple the government.