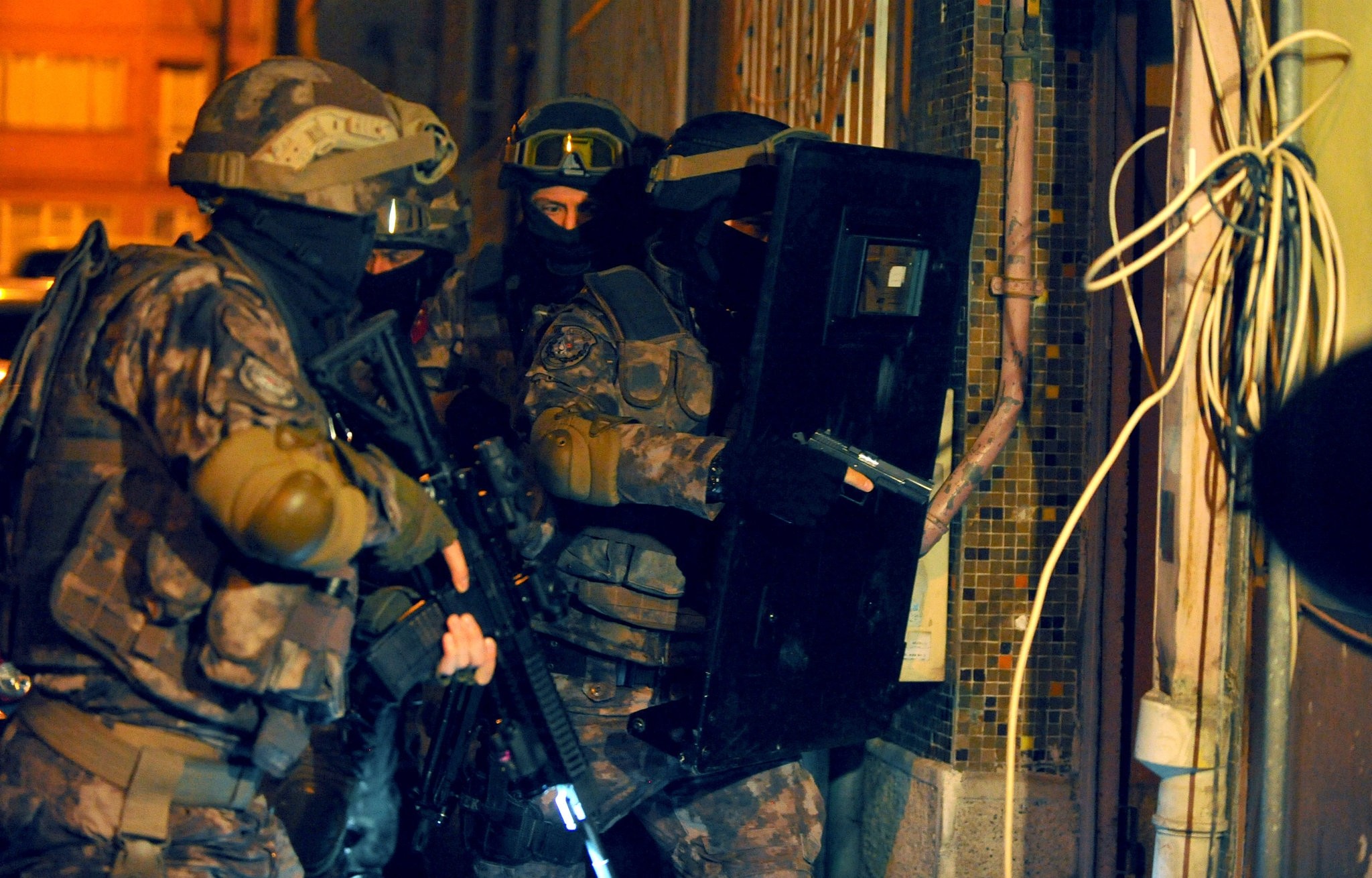 Special Operations police storm a safe house used by Daesh militants in the southern city of Adana in July 2017. The terrorist group faces frequent raids across Turkey as it loses more ground in Syria.
by Daily Sabah with AA Feb 19, 2018 12:00 am

Turkey scored big in its fight against the terrorist group Daesh with operations in Syria and Turkey that netted two high-profile militants of the group, including the wife of the country's most wanted Daesh member, and an Iraqi described as the group's ‘number five'

In two separate operations, Turkish security and intelligence managed to capture a woman and a man linked to senior names in the terrorist group. In Syria, the wife of İlhami Balı, a Turkish national at the top of a list of most wanted Daesh members, was captured while Ismail al-Ithawy, an Iraqi national who was the fifth highest-ranking member of the terrorist group, was nabbed in Turkey. Turkey, which shares a border with Iraq and Syria, two countries where the terrorist group rose to prominence amid regional turmoil, has been at the forefront of efforts to contain Daesh that launched a string of attacks in the country over the past three years.

The Habertürk newspaper reported that the National Intelligence Directorate (MİT), in a cross-border operation, located Hülya Balı in al-Bab, a Syrian town liberated from Daesh two years ago by Syrian opposition backed by the Turkish army. Balı, a member of the terrorist group, was in hiding in the town with her two children when she was captured some two weeks ago, the Turkish newspaper reported yesterday. She was brought to Kilis, the nearest Turkish city to al-Bab, and was questioned by authorities. The manhunt is still underway to capture İlhami Balı who is believed to be hiding in Syrian town of Mayadin.

Balı was the so-called "emir" for Turkey for the terrorist group until 2016 and is accused of masterminding a string of attacks, including a bomb attack targeting a political party rally in city of Diyarbakır, a suicide bombing in the town of Suruç, both in southeastern Turkey, as well as twin suicide bombings in the capital Ankara during another rally. He is also accused of ordering an attack on a Turkish outpost on the Syrian-Turkish border that killed a Turkish soldier. The attacks he masterminded claimed the lives of 142 people. Balı, a native of Reyhanlı, a Turkish town on the border with Syria, was a former al-Qaeda member and was imprisoned for his links to that terrorist group in the past. After he was released, he joined Daesh in Syria. 36-year-old Balı is on the Interior Ministry's list of most wanted terror suspects, and any tip-off to help his capture will be awarded with TL 4 million.

In another operation, Turkish and Iraqi intelligence captured a senior Daesh militant in a safe house where he was hiding in an undisclosed city, the Hürriyet newspaper reported. The newspaper reported yesterday that Ismail al-Ithawy, "number five" in the terrorist group, was captured on Feb. 8 and handed over to Iraq after six days of questioning. Al-Ithawy was one of the lieutenants of the terrorist group's Iraqi leader Abu Bakr al-Baghdadi and was running its so-called "religious council," which decided on executions of the group's captives.

According to Hürriyet's report, Iraqi-born al-Ithawy first fled to Syria's Raqqa from Iraq where the terrorist group lost ground and crossed an area controlled by the YPG, a Syria-based group affiliated with the PKK that is recognized as another terrorist group by Turkey and the international community. It is not clear how he managed to arrive at the Turkish border through the YPG-controlled region where he sneaked into Turkey with the aid of human smugglers. The YPG claims to fight Daesh in Syria.

Amid fears that Daesh militants who fled Syria may likely hit Europe and Turkey, authorities heightened crackdowns against the terrorist group with almost daily operations to net suspected militants. Though Daesh lost many strongholds in Iraq and Syria, a controversial deal between the militants and Syrian groups linked to the PKK, a major terrorist group that carries out attacks in Turkey, helped their safe evacuation in Syria. Turkey shares a lengthy border with war-torn Syria and struggles to keep it safe from infiltration through a giant border wall currently under construction.

The country is at the forefront of efforts to quell threats from the terrorist group, which partly depends on foreign recruits for manpower. Turkey has stopped thousands trying to enter Syria to join the group over the past few years. It now fights the phenomenon of militants fleeing Iraq and Syria.

Addressing an international security conference in Germany's Munich on Saturday, Prime Minister Binali Yıldırım said Turkey was ensuring Europe's security by stopping the flow of foreign fighters and fighting terrorist groups in Syria. "So far 5,800 foreign fighters have been sent back from our borders; we did not let them in," Yıldırım told the Munich Security Conference, adding that most of these fighters were residents of European countries.

"And we also banned 56,300 potential foreign fighters affiliated with Daesh from traveling to Turkey," he said, stressing that these measures significantly cut security risks for Europe. The premier underlined that Operation Euphrates Shield in northern Syria ending last March, and its strict anti-terrorism measures contributed significantly to eliminating the threat of Daesh in Iraq and Syria. "Around 10,000 Daesh members are currently under arrest in Turkey," Yıldırım said, giving the most recent figures.