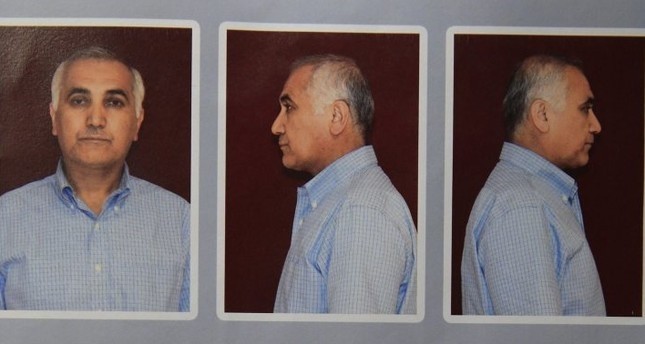 Adil u00d6ksu00fcz, seen here in a photo taken during his detention, remains at large. He is accused of masterminding the coup plot in coordination with Fetullah Gu00fclen and generals linked to FETu00d6.
by daily sabah Feb 23, 2018 12:00 am

A former military officer who confessed to having ties to FETÖ told an Ankara court yesterday how the terrorist group's leader, Fetullah Gülen, instructed his followers to seize power and how his right-hand man, Adil Öksüz, plotted the 2016 coup attempt with generals at an Ankara villa

Hakan Bıyık was a colonel at a military school, training commandos in 2016, before a coup attempt that killed 249 people that summer. His confessions have uncovered a network of infiltrators of the Gülenist Terror Group (FETÖ) who planned the putsch bid.

Having previously testified as a secret witness, codenamed "Şapka" (Hat), Bıyık appeared in person before an Ankara court yesterday for the first time. In a courtroom where 224 suspects are being tried for an attempt to take over army's headquarters, Bıyık spoke about the Ankara villa where he and other pro-coup officers, including generals, met Adil Öksüz, a point man of the FETÖ leader to discuss how to seize power weeks before they put their plan in motion.

"Öksüz told us that Gülen instructed the generals, FETÖ's infiltrators in the military, to convince Hulusi Akar (Chief of General Staff) to join the coup," Bıyık said.

"He would be put into retirement this summer," Gülen told Öksüz, according to Bıyık. Indeed, several generals were expected to be retired by a supreme military council overseeing the army's appointments in August 2016.

Prosecutors say FETÖ, fearing their infiltrators in the military would be dismissed by the council, moved earlier than planned to seize power through the putsch bid. Akar was held hostage by putschist officers when he refused to join them and was taken, along with other anti-coup generals, to a military base the putschists had captured.

Bıyık told the court that he joined FETÖ while he was still a cadet in the early '90s and was loyal to the group up until the coup attempt.

"One day, Cihan called me and wanted an urgent meeting in Ankara (from the city of İzmir where the colonel was stationed) on July 6, 2016," he recounted, referring to a point man of the terrorist group for its infiltrators in the military. In Ankara, they were joined by another FETÖ member and together, drove to a villa in Ankara's Çayyolu. He spent the next three days there.

"Harun Biniş opened the door when we arrived. In the villa, I saw Mehmet Partigöç, Gökhan Şahin Sönmezateş, Ömer Faruk Harmancık, Bilal Akyüz and Barış Avalan," he said. Biniş, an engineer who worked in companies run by FETÖ, was among the "civilians" captured at the Akıncı air base after the coup bid was quelled. He is accused of aiding Adil Öksüz and other non-military FETÖ members in coordinating the coup.

Other names Bıyık mentioned were generals and colonels who played major roles in the coup attempt. Partigöç was the general who ordered military units across the country to join the putschists and was at the army headquarters at the time of the coup attempt. Sönmezateş was jailed for life for arranging an assassination mission targeting President Recep Tayyip Erdoğan during the attempt.

Bıyık added that he later saw Fırat Alakuş, Nurettin Oruç and Ali Osman Gürcan in the villa. Alakuş was a Special Forces officer who kidnapped Hulusi Akar and other generals and Gürcan was a member of the coup plotters' Peace At Home Council while Oruç was among "civilians" captured at the Akıncı air base by anti-coup forces.

The most important name in the villa, however, was Adil Öksüz. "We discussed everything from how to kidnap President Erdoğan from his Istanbul residence and then taking him to a military ship, to the kidnapping of the prime minister and interior minister using Special Forces as well as the kidnapping of intelligence service director," he said. "Failure was not an option. When we talked about what we would do if the plans failed, Öksüz told us 'Let's not think the worst,'" Bıyık told the court.

Öksüz reportedly told them that he would present the plans to Fetullah Gülen for his approval. "One day, he told us he had a phone talk with 'our respected elder' and he sent us his greetings. He was referring to Gülen," Bıyık said in his testimony.

The military colonel said he feared that the public can oppose a coup, gather at the army headquarters to stop them and when he told his concerns to Partigöç, he responded, "Nothing will happen. There will be tanks there." Indeed, putschists dispatched tanks to the headquarters to stop a crowd of anti-coup civilians but they ultimately failed as the large crowd forced their way into the headquarters at the cost of their lives and wretched tanks from the control of putschists.

Fetullah Gülen, who currently resides in a lavish compound in Pennsylvania, U.S., faces multiple life sentences for the coup attempt and a string of other crimes related to his terrorist group. Adil Öksüz was released hours after his capture and remains at large, while the judiciary officials who ordered his release face charges of aiding him. He has reportedly been sighted in Germany. Like Gülen, he faces multiple life sentences in coup trials.

Since the coup attempt was quelled, thousands of people linked to FETÖ were arrested or detained, including top generals who coordinated the putsch bid. Coup trials have been underway since December 2016, and dozens, including Gökhan Şahin Sönmezateş, have been sentenced to life imprisonment. Partigöç, Harmancık and other generals are still being tried.

Yesterday, a court in Istanbul handed down aggravated life sentences to five military officers for taking over Istanbul's Disaster Coordination Center during the coup attempt. The center, which controls thousands of security cameras across the city, was a critical location for coup troops who also tried to seize the headquarters of telecom companies, TV stations and other places across Istanbul.