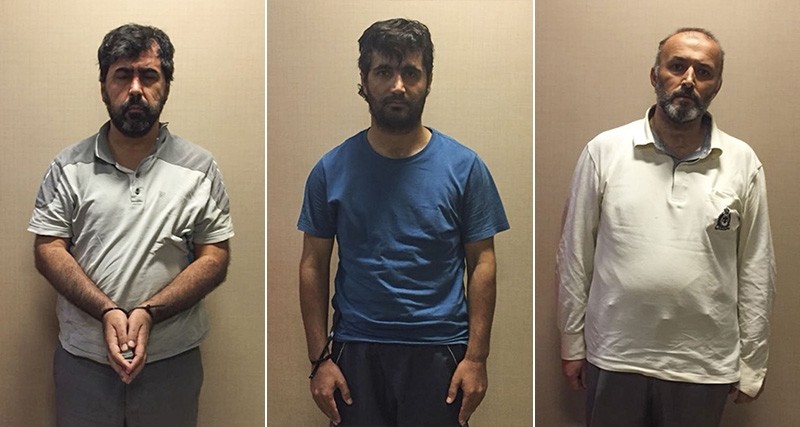 The National Intelligence Organization (MİT) on Tuesday brought three high-rank members of the Gülenist Terror Group (FETÖ) from the central African country of Gabon after a successful operation.

According to the Anadolu Agency's report based on security sources, the suspects identified as Osman Özpınar, Ibrahim Akbaş and Adnan Demirönal were brought to Ankara from Libreville in a private jet and handed over to the judicial authorities.

All three suspects were being sought by separate arrest warrants issued by Turkish courts on charges of membership to an armed terrorist group. The suspects were detained by Gabonese security forces on March 23.

Özpınar, who was the manager of the FETÖ-linked "Gabon International Turkish School" in Libreville, also held the titles of educational coordinator and general director at the "Light Academy" schools in Kenya. He was also among the detected users of FETÖ's secret communication application Bylock.

Demirönal was the manager of the FETÖ-linked Işık Schools in Gabon, formerly known as Ecole Privée International Turco-Gabon.

Akbaş, who was also a Bylock user, was the general manager of Işık Schools in Gabon while managing the money transfer of the terrorist group from Europe to Africa.

In a similar operation on March 29, six FETÖ executives in Kosovo were detained in a joint operation by Turkis and Kosovar intelligence agencies and brought to Turkey. After the operation, Kosovar Prime Minister Ramush Haradinaj sacked Interior Minister Flamur Sefaj and secret service chief Driton Gashi on the grounds that he was not informed prior to the operation.

Deputy Prime Minister Bekir Bozdağ stated last week that so far the MİT had brought 80 FETÖ suspects from 18 countries throughout the world.

Both before and after the 2016 coup attempt, hundreds of FETÖ members fled abroad. Ankara now seeks more cooperation from the international community to bring them to justice.

In a televised interview last week, Bozdağ stated that such operations would continue. "The public knows about only a few operations. You know how they brought back [terrorist group's members] from Bulgaria and Malaysia but others are not publicly known due to the sensitivity of the issue," he said, referring to the other operations against Gülenists. "The head of the terrorists in Pennsylvania (Gülen) is apparently panicked at our will and effort to bring them to justice. He should not feel comfortable there because our state will be after them wherever they go. They will be picked from the dens they hide in and will be handed over to Turkish justice," he said.

Media reports said that the country has so far identified some 4,600 suspected members of the group around the world. Turkish courts also periodically issue arrest warrants for FETÖ members abroad. A court in Ankara has asked the Justice Ministry last week to file extradition requests for 54 senior members of the group including Fetullah Gülen.

Ankara has long complained of reluctance from European countries and the U.S. to cooperate in the fight against FETÖ.

The terrorist group runs a global network of schools and companies. It has long disguised itself as a charity organization with religious affiliations before attempting to seize power in Turkey in 2013. FETÖ suspects mostly live in the U.S., Germany, Canada and the U.K. A majority of Turkey's allies in Africa and Asia have shut down FETÖ-linked schools and have already extradited wanted suspects.

Recently, Turkey has asked Azerbaijan, the country's closest ally, to extradite six suspects and Baku has completed the extradition of two of them, including a deputy of FETÖ's imam for all of Azerbaijan.