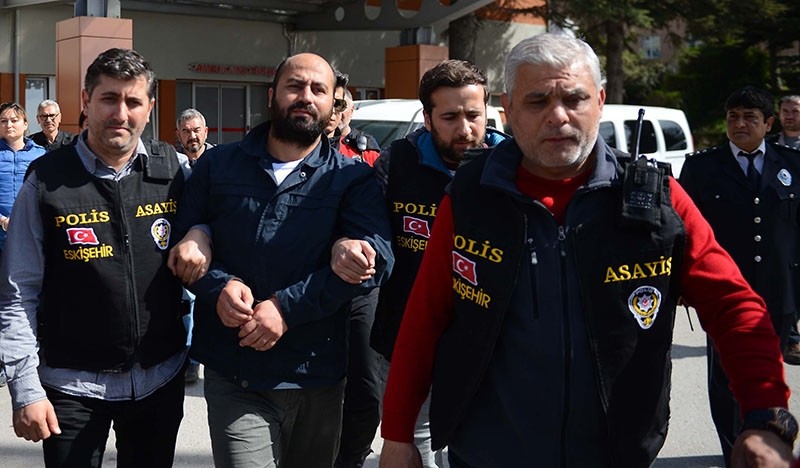 The details of last week's shooting that led to the deaths of four faculty members at Osmangazi University in the central province of Eskişehir have shocked the members of Turkey's Council of Higher Education (YÖK).

Volkan Bayar, a research fellow in the Faculty of Education of Osmangazi University, stormed the offices of Deputy Dean Mikail Yalçın, Secretary Fatih Özmutlu and two academics, Research Assistant Yasir Armağan and Asst. Prof. Serdar Çağlak, on April 5 and shot them dead before he was arrested by police.

According to a report by Safure Cantürk from the Sabah daily, the investigation report presented to YÖK members stated that all victims were shot dead with three bullets each: first to the left side of their chests, then the right, and finally to the head.

Security camera footage showed that when Bayar killed Özmutlu, he first shot the secretary in the chest two times, and when the victim fell behind his desk, Bayar purposefully moved around his desk to shoot him in the head.

One of the now-deceased academics noticed Bayar was approaching to kill him and tried to lock himself in his room, but Bayar fired several bullets to break the lock, and killed the academic in the exact same way.

In his first testimony to the police, Bayar had said he was angered by complaints filed by Armağan, an academic among the victims who had accused Bayer of verbal and physical assault. Since all other victims were not related to this, and the way Bayar committed these murders showed that the incident was premeditated, deliberate and a cold-blooded serial killing rather than a crime of passion.

Meanwhile on Thursday, the YÖK held an extraordinary meeting on the massacre and appointed Prof. Kemal Şenocak from the Law Faculty to the post. The previous rector, Prof. Hasan Gönen, who faced protests from academics and the relatives of the victims for inaction against the shooter despite their earlier complaints, resigned after the incident.

The friends and families of victims as well as Bayar's colleagues told media outlets that the shooter filed complaints in court against many staff members, accusing them of membership in the Gülenist Terror Group (FETÖ). Several academics were even tried in court where Bayar served as a witness, but they were cleared of charges.

Aylin Bayar, the ex-wife of the shooter who also worked at the same university, was also detained.

Authorities have declined to comment on the complaints while an investigation is still underway.
Last Update: Apr 13, 2018 4:21 pm
RELATED TOPICS