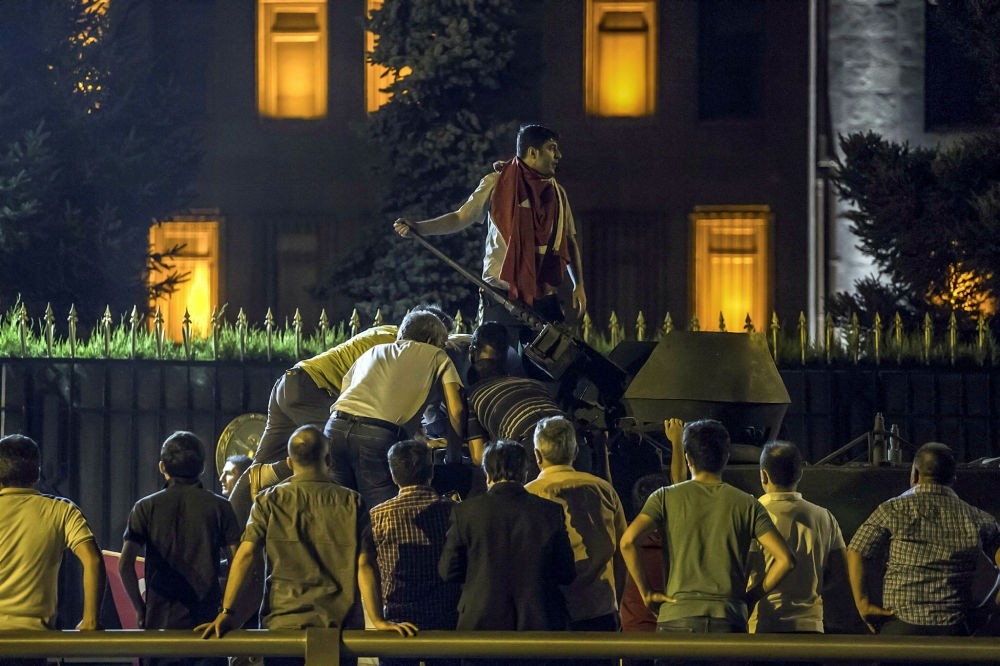 An anti-coup crowd climb up a tank captured from putschists outside army HQ in Ankara on July 15, 2016. Authorities has carried out almost daily operations against terrorist group FETu00d6u2019s infiltrators in the military since the coup was foiled.
by Daily Sabah May 04, 2018 12:00 am

Security forces nabbed 30 people, including officers on duty, in nationwide operations against a secret network of the terrorist group FETÖ's infiltrators in the military

Thirty out of 70 suspects with outstanding arrest warrants were captured Thursday in operations across Turkey against the Gülenist Terror Group (FETÖ). The suspects, who include officers currently serving in the Turkish Armed Forces, are accused of being members of terrorist group's network in the military.

Thursday's arrests stem from an investigation by the Chief Prosecutor's Office in central city of Konya, which is home to a major air base.

Police carried out operations in 34 cities to capture the suspects. The unidentified suspects are alleged to be FETÖ members, upon testimony of military personnel linked to the group who were captured in previous operations.

Some among them are linked to "secret imams" who were detained earlier. "Secret imam" is a term FETÖ, which long posed as Hizmet (Service) Movement promoting religion and charity, uses to describe civilian "handlers" of its military infiltrators.

The terrorist group tried to seize power first in 2013 after it cultivated clout in judiciary, police and military with decades of infiltration. When the attempt failed, it tried again in the 2016 summer but the putsch was thwarted by a strong public resistance.

Suspects captured or wanted in the recent operations were recruited at an early age by FETÖ, according to prosecutors. Before enrolling in the army, they were accommodated at "houses of light," a type of dormitory for high school students run by the terrorist group.

Prosecutors say they were "devout" followers of the group.

FETÖ, led by Fetullah Gülen, a U.S.-based former preacher, picked the brightest and most loyal among military cadets to infiltrate into the army, previous investigations in other cases related to the group, revealed.

Gülen, who still spout advice to his followers videotaped speeches from his posh compound in Pennsylvania, has openly urged them years ago to be "in the veins of the state," in a well-known speech.

It was a known fact that there were sympathizers of Gülen in the army but it was revealed after the coup attempt that the secret network of the terrorist group in the military is possibly bigger than first thought and more difficult to detect.

Secret Gülenists have been instructed by senior cadres to hide their identity even those closest to them, according to former members of the group.

They are encouraged not to abstain from drinking and instructed not to pray openly. These were signs of being conservative in the army, which was known for a strictly secular mindset in the past, when Gülenists posed as a charity group with religious undertones.

Similar operations were carried out across Turkey for FETÖ suspects on Thursday. In Kocaeli, a northwestern city, a former police chief, who was dismissed from law enforcement agency for suspected links to the group, was taken into custody, along with eight other police officers who were suspended from duty earlier.

Hulusi Çelik, who served as police chief in Kocaeli between 2012 and 2014, was captured in Istanbul and brought to the city where he will be questioned over his links to a senior member of the terrorist group.

Detentions came after an investigation revealed names of suspects in a memory card in possession of a FETÖ "imam." The card had documents with names of some 70,000 police officers, classified in line with their allegiance to the terrorist group.

Some 9,500 police officers, whose names were found in the list, were already suspended pending investigation.

Thousands of people were detained or arrested following the 2016 coup attempt while trials of those involved in the attempt are still underway.

Military officers, from lieutenants to generals, face aggravated life imprisonment for their role in the attempt if found guilty. Dozens have already been sentenced to life in previous coup trials.