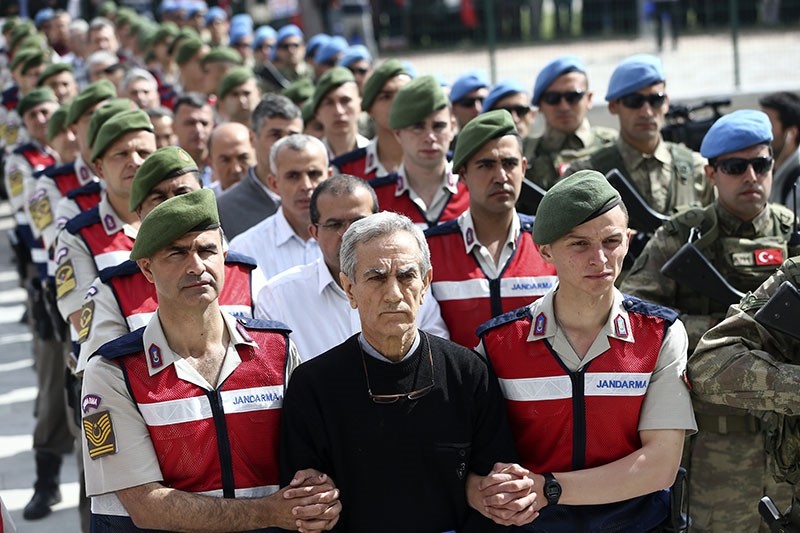 This file photo dated May 23, 2017 shows suspects of actions at the General Staff HQ during the July 15 coup attempt being brought to the courthouse in Sincan, Ankara, with former Air Force commander Gen. Aku0131n u00d6ztu00fcrk at the forefront. (AA Photo)
by Daily Sabah with AA May 09, 2018 12:00 am

Turkish prosecutors on Wednesday called for multiple aggravated life sentences for alleged members of a group who plotted to replace the government after the 2016 defeated coup bid.

In the hearing on the takeover of the Office of Chief of General Staff, Turkish military's headquarters in the capital Ankara, prosecutors said ringleaders of the coup attempt blamed on the Gülenist Terror Group (FETÖ) should be handed aggravated life sentences and prison terms amounting to thousands of years for the murder of 250 people and injuring hundreds of others.

The prosecutors recommended 252 aggravated life sentences to alleged 37 members of the so-called "Peace at Home Council," the military junta linked to the Gülenist Terror Group (FETÖ) behind the defeated coup.

In the main trial of former General Staff personnel, 224 defendants are being tried, including alleged members of the so-called council, which was meant to replace the government if the deadly putsch had not been defeated.

In Ankara's 17th Heavy Penal Court, Prosecutor Bülent Karakuş asked the court to charge the so-called council members with violating the Constitution, deliberate killing, and attempting to assassinate the president.

The prosecutor sought 2,987 aggravated life sentences for retired Gen. Akın Öztürk, former air force Commander and the suspect with the highest military rank among coup plotters, as he was held responsible for all pro-coup actions throughout Turkey. The former general was caught at Akıncı Air Base, a command center of the putschists, where warplanes and gunships took off to strike Parliament and other strategic locations in the capital during the attempt.

Gökhan Şahin Sönmezateş, the general who led the assassination team, was among those Karakuş asked for multiple prison terms in yesterday's hearing. Fırat Alakuş, the Special Forces officer who led the team of putschists that abducted top military brass opposing the coup, also faces multiple life sentences. Alakuş stormed the army headquarters, abducting Chief of General Staff Gen. Hulusi Akar and taking him to Akıncı Air Base. Akar was freed when the coup attempt was foiled in the early hours of July 16, 2016. The prosecutor asked for multiple aggravated life imprisonment for Mehmet Dişli, a general accused of attempting to convince Hulusi Akar to join the coup attempt. When Akar refused, Alakuş and soldiers accompanying him stormed the army chief's office and handcuffed the general. Dişli accompanied Akar to the military base where the top military brass were held hostage.

After the putsch bid in 2016 was foiled, FETÖ faced a heightened crackdown and more than 77,000 people were arrested for links to the group. Trials of soldiers involved in the attempt and nonmilitary members of the terrorist group started in December 2016. FETÖ is known for its widespread infiltration of the judiciary, law enforcement, the military and bureaucracy. Through its followers in the judiciary, it is accused of orchestrating sham trials to imprison its critics or anyone it deemed an obstacle to its interests. After expanding its clout, it sought to topple the government, first in 2013.

Defendants are also accused of attempting to assassinate President Recep Tayyip Erdoğan, who escaped the attempt in Muğla where he was staying in a hotel while on vacation, when the coup unfolded. He later arrived in Istanbul where he rallied the nation to take to the streets to confront the putschists.

Karakuş also asked the court to charge the so-called council members with killing security forces and civilians the night of the defeated coup, violating the constitution and deliberate killing.

The prosecutor also asked the court to sentence the above defendants to nearly 56,000 years in jail each for injuring 177 security forces and 2,558 civilians the night of the defeated coup.

Birol Kurubaş, a civilian FETÖ member accused of co-conspiring with the group's infiltrators in the military, also faces aggravated life imprisonment. The prosecutor asked for the acquittal of 12 defendants who were already released pending trial, citing lack of evidence on their involvement in the attempt.

A separate trial will be held for FETÖ leader Fetullah Gülen and 12 other fugitive defendants. Gülen currently lives in Pennsylvania, United States. Turkey has asked Washington to extradite him.

This year, over 600 people convicted in Ankara of involvement in the coup attempt received prison sentences ranging from about a decade to life.

FETÖ and its U.S.-based leader Fetullah Gülen orchestrated the defeated coup of July 2016, which left 250 people killed and nearly 2,200 injured.

Ankara has also said FETÖ is behind a long-running campaign to overthrow the state through the infiltration of Turkish institutions, particularly the military, police and judiciary.