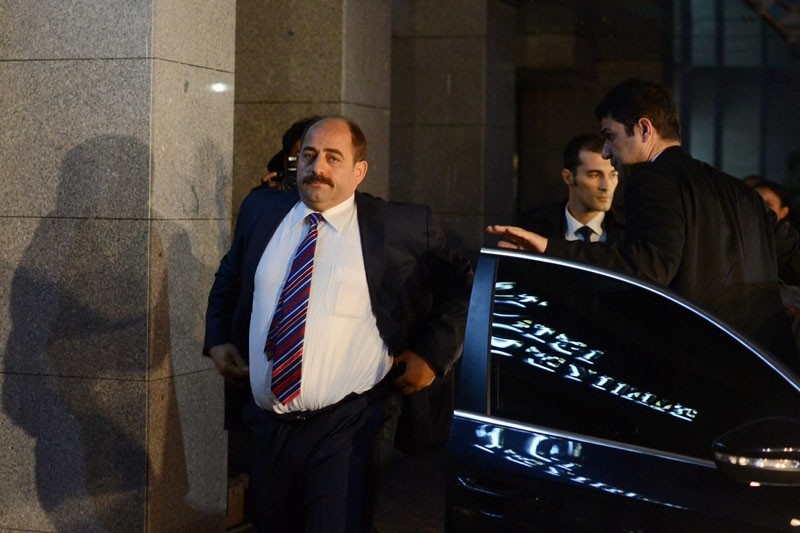 A secret witness in an investigation into FETÖ, the terrorist group behind the 2016 coup attempt revealed that Celal Kara and Zekeriya Öz, two prosecutors wanted for their links to the group, were protected by German intelligence, showing photos of the two men with German officials at their residence there

A secret witness in an investigation into Gülenist Terror Group (FETÖ), which is accused of carrying out July 15, 2016 coup attempt, has testified that German intelligence is protecting key members of the group.

Celal Kara and Zekeriya Öz, two prominent prosecutors wanted for their links to the terrorist group, are being protected by German intelligence agents, the witness told the authorities. He also produced a photo showing a German agent in Öz and Kara's residence in Germany as evidence.

The secret witness codenamed "Sultan" is an important figure within the terrorist group known for its widespread clout in Turkey. He applied to the Istanbul Chief Prosecutor's Office to testify on Celal Kara, with whom he was in touch as a fellow member of the group.

As the two engaged in a chat over a video call app in March 2016, Kara told the witness he and Öz (who shared the same residence) were protected by a German intelligence official.

When "Sultan," asked if he can see the agent, Kara turned to the camera to a smiling man sitting on a sofa. Sultan took two snapshots of the agent and delivered the images to the prosecutors.

Kara, Öz and Mehmet Yüzgeç, another prosecutor linked to the terrorist group, are suspects in an investigation into FETÖ's first coup attempt in December 2013. The probes launched by the three former prosecutors and police chiefs on Dec. 17 and Dec. 25, 2013, under the pretext of corruption, were labeled as judicial coup attempts by the Turkish government, on the basis of the use of illegal wiretappings and falsified evidence.

Öz and Kara, who were also behind several sham trials orchestrated by FETÖ to imprison the terrorist group's critics, are in the German city of Freiburg, according to Turkish media reports. Turkey has issued an international arrest warrant for them.

The three fugitives were named in a 557-page indictment that charges them with an attempt to overthrow the government, running an armed terrorist organization, abuse of duty, forgery in official documents, violation of privacy of communications, illegal wiretapping, defamation, fraud and other charges. Apart from life sentences for attempting to overthrow the government, they may receive prison terms of up to 72 years if convicted.

The secret witness also handed the online correspondence between him and Kara to the prosecutors and messages by the fugitive FETÖ member show how the group was preparing to carry out the 2016 coup attempt. "His time is up," Kara said, referring to President Recep Tayyip Erdoğan, four months before the attempt that killed 250 people.

"Chaos will gradually start everywhere in Turkey. People will take to the streets; there will be acts of violence. [We] finished [infiltration] in the army and some among the police will serve us," Kara says in a message, adding that the government would "fail" to stop the army. He implies that more than half of the army is loyal to FETÖ. The fugitive prosecutor also says he would return to Turkey after the coup. "The army will take over in May and if this does not happen, in September," he ominously writes in a message.

Escaping prosecution for links to the coup attempt and FETÖ, more than 600 military officers and civil servants from Turkey are believed to have applied for asylum in Germany since the coup attempt, according to figures released by the German Interior Ministry last October.

A senior figure of the group in Germany told local media last year that the European Union country would become "a new center" for the group. Ankara condemned Berlin's decision to accept the asylum applications of former military personnel last year. The Turkish Foreign Ministry said in a statement that Germany has shown disregard for democratic principles by welcoming coup perpetrators.

After the coup attempt, Turkey stepped up operations against the terrorist group. On Friday, 184 out of 300 soldiers wanted for their links to the group were detained in nationwide operations. Istanbul chief prosecutor's office had issued arrest warrants for officers, including active-duty soldiers. Identities of suspects were uncovered in an investigation into FETÖ's point men in charge of infiltrators in the army. Tracing these "brothers" or "imams," police found they used pay phones in public places to contact the infiltrators after the coup attempt led to an increased scrutiny of the terrorist group. Using one payphone in Istanbul's Üsküdar, the point men contacted 353 infiltrators in the Turkish army. In other operations on Friday, police nabbed eight suspects involved in leaking admission exams for Police Academy to group's members. They were among 21 wanted by security forces. In Ankara, warrants were issued for 21 suspects for allegedly leaking Police Academy exam questions, and eight of them were arrested in operations in 13 provinces. Authorities say FETÖ members obtained question and answer papers to a 2012 admission exam and gave them to their recruits. In another operation, five suspects belonging to group's "elder sisters," a part of FETÖ in charge of female members, were detained.