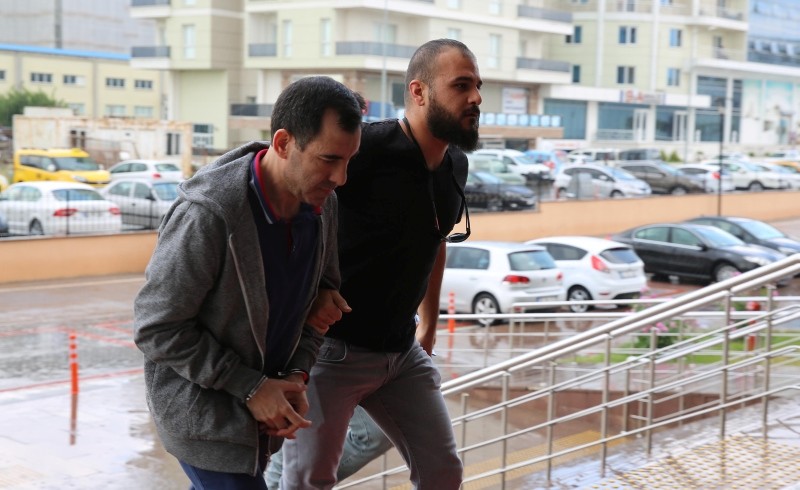 A group of suspected members of the Gülenist Terror Group (FETÖ), including a judge of an infamous sham trial targeting officers in the Turkish Armed Forces (TSK), was detained Monday in the northwestern province of Edirne while trying to escape to Greece.

Acting upon a tipoff that FETÖ members would illegally be taken across the border, units from the smuggling and organized crime department in Edirne stopped two cars in Ipsala district in an area near the border. The nine people in the cars were found to be the organizers of trafficking operations for FETÖ members.

Based on the suspects' testimonies and subsequent research and monitoring, police units stopped a van near the border, which was carrying 11 people including Ismail Kurt, a former judge who oversaw the "military espionage" sham trial in 2013.

Other suspects in the van included a doctor, an engineer and teachers, some accompanied by their family members. Kurt and several other suspect were found carrying fake ID cards and a sizable amount of foreign currency.

Kurt was referred to court after his testimony was taken in Edirne Police Department.

The 2013 sham trial, which involved 357 suspects, including 49 active duty soldiers, was held in the Izmir Fifth High Criminal Court on charges of "keeping confidential military information and documents." All the defendants in the case were acquitted in February 2016.

The indictment of the case was found to have been fabricated by the police and military infiltrators working under the direction of FETÖ's U.S.-based leader Fethullah Gülen.

The trial was among a series of sham trials launched by FETÖ, including the Ergenekon and Sledgehammer (Balyoz) trials, to infiltrate into the Turkish Armed Forces.

Zafer Kılınç, the prosecutor in the case, was also detained in Edirne on April 16 while trying to escape to Greece.

Ankara accuses Athens of providing a safe haven for FETÖ as hundreds of FETÖ members, including eight putschist soldiers who fled with a military helicopter, have illegally crossed into Greece in the aftermath of July 15, 2016, coup attempt that killed 250 people and injured 2,200 others.