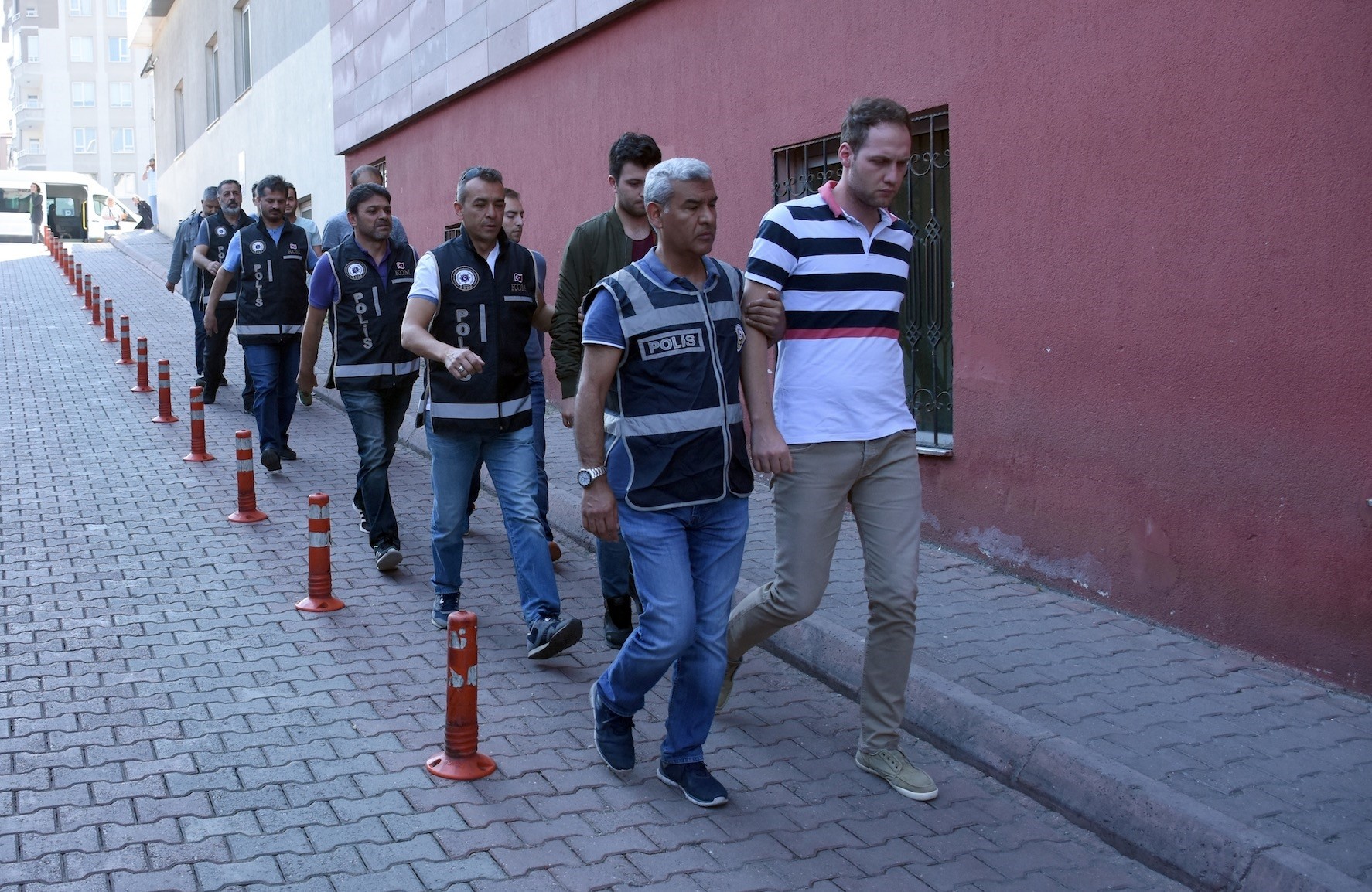 Police escort former military officers linked to FETu00d6 to courthouse in central city of Kayseri. The terrorist group faces almost daily operations after the 2016 coup attempt it is blamed for.
by Daily Sabah with AA Jun 07, 2018 12:00 am

Authorities have arrested dozens of suspects linked to the FETÖ terrorist group in nationwide operations, including a high-ranking figure, while a former governor and suspects accused of exam fraud were handed down prison terms

Turkey's efforts to wipe out the Gülenist Terror Group (FETÖ) continue unabated two years after the group tried to topple the government. In yesterday's operations across the country, police detained and arrested dozens of people linked to the group, while courts handed down prison sentences to the former governor of a western city and FETÖ suspects accused of fraud in the admission exam for the Police Academy.

Twenty-one suspects have been rounded up in southwestern Muğla province as part of an anti-terror operation against alleged attempts to revive the terror network. According to police sources, who spoke on condition of anonymity, the suspects allegedly have been playing an "active role" in efforts to bring around the terror group, holding frequent meetings, and facilitating and harboring fugitive members of the group. The sources also said that the suspects have been providing financial assistance to needy FETÖ members to keep their ties with the group intact.

In separate raids, 11 FETÖ suspects, including three women, have been arrested in 8 provinces including Uşak, Istanbul, Izmir and Antalya. Police seized computers and documents belonging to the suspects. They were also accused of using the terror group's encrypted messaging program ByLock. Another anti-terror operation saw one specialist sergeant arrested in central Eskişehir province for alleged ties with the terror group.

The Chief Public Prosecutor's Office in the capital Ankara issued arrest warrants for 33 people as part of an investigation into FETÖ suspects running private teaching institutions at seven locations. The financial crimes unit of Ankara police had launched simultaneous operations across the capital to nab the suspects.

In Ankara, more than 50 FETÖ convicts were given jail terms, ranging from one year to 10 years following a court case on police exam fraud. A total of 62 defendants were tried in the case about leaking questions ahead of the Police Academy entrance exam in 2012. Ankara's 15th Heavy Penal Court handed down jail terms ranging from one year and six months to nine years and seven months to 55 FETÖ convicts on the charge of being members of an armed terror group. The court also handed down up to three years and four months to 27 of the convicts on the charge of committing fraud. Seven other suspects in the case were released.

Another court in Ankara sentenced Halil İbrahim Akpınar, the former governor of the western province of Bilecik to seven years and six months in prison for membership in FETÖ. Akpınar was dismissed from his duty after the coup attempt in 2016 and was detained though he was later released pending trial.

Thousands were detained or arrested after the coup attempt was foiled by strong, public resistance. FETÖ, led by U.S.-based Fetullah Gülen, is accused of orchestrating the coup attempt by ordering its followers in the army to seize power.

Kemal Zorludemir, a high-ranking member of the terrorist group who was in charge of the group's IT department according to police, was also captured yesterday. Zorludemir, who was also in charge of FETÖ's infiltrators in the army, was planning to flee abroad when he was captured in Edirne, a city bordering Greece and Bulgaria. He was in possession of a fake ID.