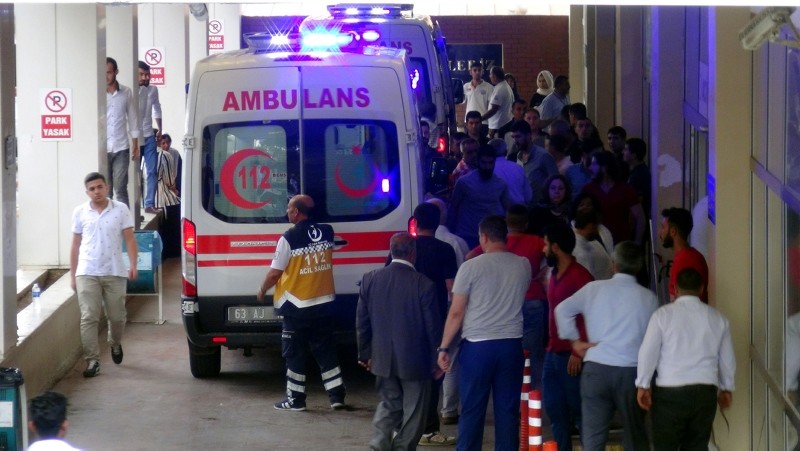 Ambulances transfer the wounded in an armed attack targeting the election campaign of the ruling AK Party in Suruu00e7 district of Turkey's southeastern u015eanlu0131urfa province, June 14, 2018. (DHA Photo)
by Daily Sabah with Agencies Jun 16, 2018 12:00 am

At least 19 suspects, including an opposition pro-PKK Peoples' Democratic Party's (HDP) candidate for parliament, were arrested on Saturday in connection with an armed attack on ruling Justice and Development Party (AK Party) members in southeastern Turkey.

Although Yıldız survived the attack with no injuries, his older brother Mehmet Ali Yıldız died after succumbing to his wounds in the hospital.

The Şanlıurfa Governorship said in a statement that Yıldız, accompanied by a group of people, was visiting tradesmen in Suruç town center when a discussion turned into a fight.

19 suspects including Ismail Kaplan, HDP's deputy candidate for Şanlıurfa, and some district officials of the HDP and its regional affiliate Democratic Regions Party (DBP) were arrested after chief public prosecutor's office in southeastern Şanlıurfa province issued arrest warrants for 23 suspects.

President Recep Tayyip Erdoğan previously said that Yıldız was killed by PKK supporters and vowed that the perpetrators will be captured by security officials. Interior Minister Süleyman Soylu also stated that the attack was planned beforehand.

Suruç, a predominantly Kurdish town located across the border with northern Syrian town of Ayn al-Arab, also known as Kobani, was the scene of a Daesh suicide bombing on July 20, 2015 that killed 34 people and wounded about 100.

The tensions southeastern Turkey, specifically in border province Şanlıurfa with a mixed Kurdish and Arab population, were high at the time due to fierce clashes between Daesh and PKK's Syrian offshoot People's Protection Forces (YPG) terrorist groups in Syria's civil war. Daesh had a significant support base among local Arab tribes at the time, with the PKK extending its control in northern Syria as an opposing force with the support of the Assad regime and the U.S.-led Coalition.

The bombing, came in the aftermath of a long Daesh siege on Kobani that followed numerous atrocities targeting Kurds and Yazidis in northern Syria and Iraq, was one of the key events that led to the collapse of the three-year-long reconciliation period with the PKK, which wrongfully accused the Turkish government of ignoring the Daesh threat.

Earlier in October 2014, the region had witnessed riots stemming from the Siege of Kobani, in which 50 people were killed in violence and clashes between pro-PKK and HDP sympathizers, supporters of conservative groups and Islamist Free Cause Party (HÜDA-PAR), and security forces.