Denials mark another day in court for July 15 putschists 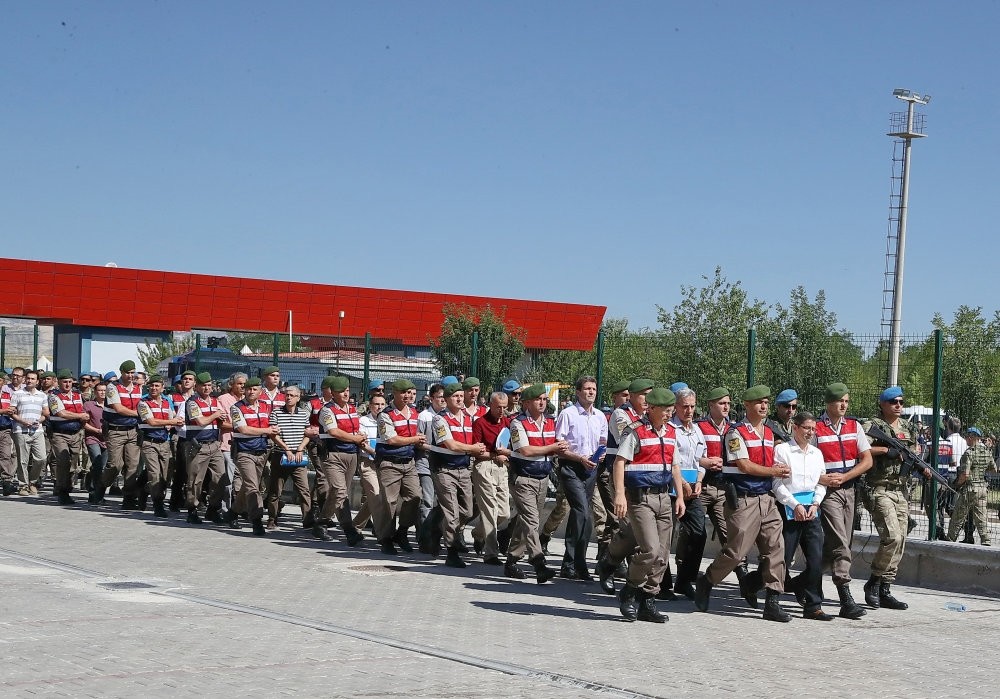 Suspects behind the FETÖ terrorist group's July 15, 2016 coup attempt keep clinging to denials despite being caught red-handed. Two defendants in two major trials in the capital Ankara were the latest to resort to a defense of denial despite their role in the bloody attempt that killed 250 people

Trials on the July 15, 2016 coup attempt blamed on military infiltrators of the Gülenist Terror Group (FETÖ) resumed yesterday after a weekend break. In the trial of 460 defendants in the Akıncı Air Base case, defendants, as usual, pursued a defense strategy based on unwavering denial like dozens before them.

Two officers in the Akıncı trial and a trial on the role of gendarme troops in the putsch attempt both rejected their role in the coup attempt and their membership in the terrorist group.

Akıncı is an air base that served as the command center of the coup plotters. It was from that base that warplanes took off to strike Parliament and other strategic locations and it was where top military personnel opposing the putsch were held hostage.

Appearing before a court inside a high-security prison complex, non-commissioned officer Fatih Kahraman, the bodyguard of the Air Force Cmdr. Gen. Abidin Ünal, denied accusations that he helped in the abduction of Ünal. Kahraman was heading a group of putschists who arrived in Istanbul to kidnap the general when they approached the Air Force commander at a wedding he and other commanders were attending on July 15, 2016. Rounded up by putschists, Ünal and the others were then flown to Akıncı where they were kept for hours. They were released when the coup plotters failed due to a strong public resistance.

Kahraman claimed the team of putschist soldiers who took Ünal hostage was actually soldiers dispatched to "protect him against possible terror attacks." His defense reflects a common pattern among putschists who claim they simply "took measures against likely terror attacks" when they "accompanied generals." He said Ünal "was not forced to come with them to Akıncı" and added he only found out about the coup attempt the morning it was completely thwarted. "I only did my job," Kahraman said.

Similarly, Lt. Col. Yasin Kayabaşı, who is being tried for the takeover attempt of the General Command of Gendarme, rejected accusations of being part of the coup and being a member of FETÖ. Kayabaşı is among 243 defendants in the case. According to an indictment, he is one of officers who commanded the takeover of the headquarters in the capital Ankara. Prosecutors say the defendant and others disarmed anti-coup officers at the headquarters and sent messages to gendarme units across Turkey, urging them to join the coup attempt. They are also accused of the murders of 10 people who tried to force their way into the headquarters to stop the putschists.

Turgut Aslan, the head of the Turkish National Police's counter-terrorism department, was among those shot by the putschists there although he survived. Kayabaşı claimed they only took "measures against an imminent terror attack" and he tried to leave the headquarters once he found out that a coup was underway but failed. He denied his links to FETÖ, including the discovery of ByLock on his phone. ByLock is an encrypted messaging app developed and used exclusively by FETÖ members to relay senior figures' messages to infiltrators in the military and other places.

Since the coup attempt was thwarted, prosecutors have launched more than 100,000 probes across the country. Authorities have detained or arrested tens of thousands of people for participating in the coup attempt and/or membership to FETÖ. A state of emergency facilitating the crackdown on terrorists is still in force and security forces carry out almost daily operations to capture FETÖ suspects. Hundreds were sentenced to life in the coup trials including 49 generals, 418 officers in lower ranks, a police chief who joined the coup attempt, 16 cadets, four engineers who helped the putschists, two teachers, two policemen and six civilians.

FETÖ, a criminal enterprise founded by fugitive Fetullah Gülen, has been directly implicated in the December 2013 judicial coup attempt and the 2016 military coup attempt against the democratically elected government of Turkey. With its media and business arms, the terrorist group created significant public clout, which was augmented by infiltration into state institutions, principally the judiciary, police and military. Many of its senior members fled abroad on the eve or soon after the coup attempt in 2016.