Rewards for informants, color codes for suspects to help war on drugs 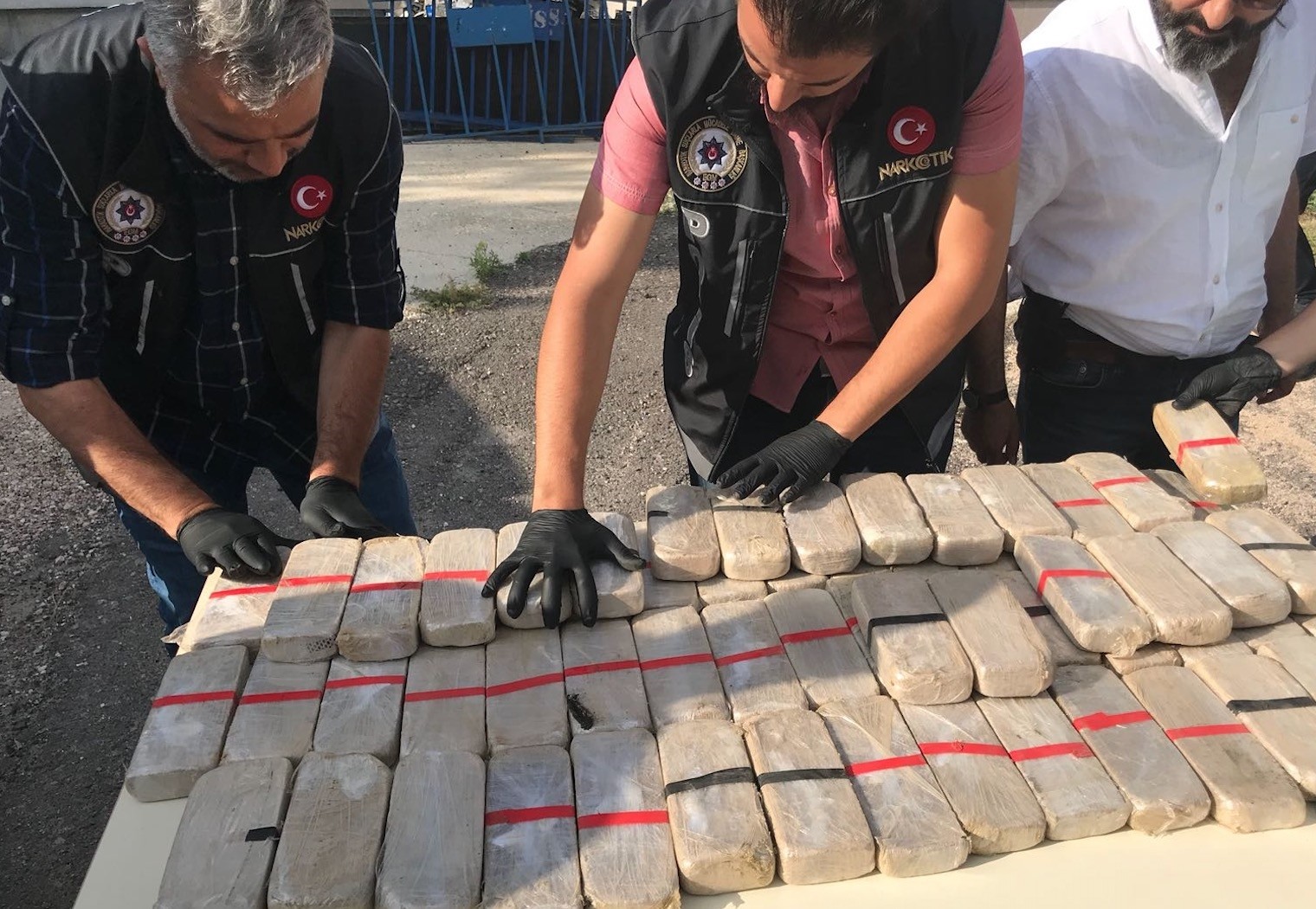 Narcotics police in the central city of Niu011fde examine packs of heroin smuggled inside a hidden compartment of a car on June 21.
by Daily Sabah with AA Jun 27, 2018 12:00 am

Turkey is escalating its fight against drugs and improving rewards for informants on drug smugglers, moreover suspects wanted on drug charges will be color coded like terror suspects, says the narcotics head of the Turkish National Police

Turkey, a transit route for drug smuggling between Europe and Asia and a country fighting drug abuse among the young, marked the International Day Against Drug Abuse and Illicit Trafficking yesterday.

İbrahim Hakkı Seydioğulları, who heads the Turkish police's counter-narcotics department, outlined how they fared in the fight against illicit drugs as well as their plans to boost the war on drugs.

Similar to those wanted on terror charges, the country has introduced color coding for suspects wanted for drug charges. Seydioğulları says they also plan to introduce a new rewards scheme for informants.

In 2014, the government launched "The Rapid Action Plan against Drugs" to counter drug abuse and smuggling. The action plan covers all aspects of the struggle against narcotics, abused by about 2.7 percent of the population, from raising awareness of their dangers and curbing demand to rehabilitation and treatment of addicts and facilitating social inclusion. It also paved the way for the establishment of "narco teams," specialized police units active in neighborhoods where drug sales are concentrated.

The threat of synthetic drugs is a major concern for the country. Easily accessible and cheaper, synthetic drugs are far more lethal. Seydioğulları says even one-time use can lead to death. Bonzai is among them and proved to be a public scare in the past few years with images of abusers in a catatonic state splashing the front pages of newspapers. According to Seydioğulları, almost half of drug-related deaths were caused by synthetic drugs in 2016.

He says that they already paid informants giving information on drug dealers but they wanted to upgrade the rewards scheme. "It is not possible to crack down on smuggling without the assistance of informants or without tip-offs. We want to make the rewards scheme more motivating and plan to reward those bringing information on the organization of gangs overseeing drug sales on the streets," he told Anadolu Agency (AA).

According to the police chief, more than 30 "families" organize drug smuggling in Turkey with international connections. "We monitor them and assign them codes [regarding the risk they posed]. Their [threat level] changes after operations. We also cooperate with other countries on their international connections," he says. Still, he laments "insincerity" of European countries. "They do not inspect or are reluctant to inspect chemicals used in drug production. For instance, a chemical component for heroin is entirely European-made. If they can eradicate it, there wouldn't be heroin production. It also applies to synthetic drugs. Raw material for those drugs come from Europe and they are produced in Syria. The Netherlands, the Czech Republic and Belgium are production hubs of ecstasy and Captagon pills," he says.

Turkey is party to counter-narcotics agreements with about 80 countries and in close cooperation with the United Nations in fight against drugs, contributing $800,000 every year to the United Nations Office on Drugs and Crime (UNODC). It also leads the fight against drug revenues of terrorist groups. The PKK, which waged a campaign of violence focused in southeastern Turkey is the most prominent among them for its dependence on drug smuggling and drug production. The terrorist group earns about $500 million yearly from the drug trade and smuggling, according to a report by the Turkish Ministry of Interior.