US officials to visit Turkey to discuss extradition of Gülen 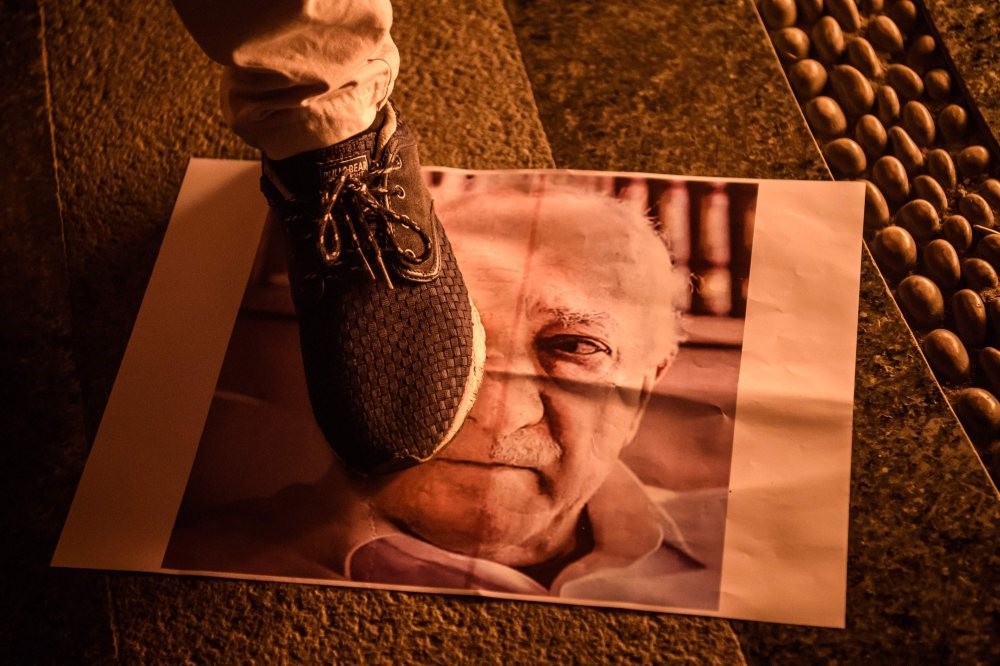 A demonstrator tramples on a photo of Fetullah Gu00fclen during a rally in Istanbul two days after the 2016 coup attempt that killed 250 people.
by Ersan Atar Jun 28, 2018 12:00 am

Fetullah Gülen's days in the United States may be numbered as a delegation from the U.S. Department of Justice will visit Turkey soon to discuss the extradition process of the leader of the terrorist group blamed for the 2016 coup attempt

Turkey will host a U.S. delegation in the coming days as it fights to speed up the extradition process for Fetullah Gülen, the leader of the Gülenist Terror Group (FETÖ) who resides in Pennsylvania. The delegation of Department of Justice officials and court officials will hold talks with officials from the Justice Ministry as well as with prosecutors investigating the cases related to the terrorist group and judges. Ankara aims to update U.S. officials on information regarding the terrorist group accused of carrying out the July 15, 2016 coup attempt.

Gülen was already implicated in a string of wrongdoings in cases related to his group; but after the coup attempt that killed 250 people, Ankara accelerated its efforts for his extradition from the United States, a close ally of the country. Gülen left for the United States in 1999 citing health reasons and lives in a luxurious retreat in Saylorsburg, Pennsylvania run by the FETÖ-linked Golden Generation foundation.

Ankara officially submitted evidence regarding FETÖ's role in the coup attempt to the U.S. in October 2016. The evidence shows that Gülen's network formed a quasi-state within the Turkish government and attempted to topple it with the ultimate intent of taking over the state through a vicious coup. Despite Ankara's determined efforts, the administration of former U.S. President Barack Obama took no action against the U.S.-based terrorist leader. Under normal circumstances, Gülen should have already been arrested since Turkish authorities issued an official request for his extradition under the 1979 treaty between the U.S. and Turkey. Former Justice Minister Bekir Bozdağ has gone to the U.S. several times to expedite the legal process and met with U.S. authorities, including U.S. Attorney General Jeff Sessions; however, no formal steps have been taken on the issue so far.

Officials from both countries are already involved in an exchange of phone calls and letters for extradition amid lobbying by Gülenists in the United States to stop the extradition and fears that Fetullah Gülen may flee to another country.

Turkey recently revealed damning new evidence regarding the connection between the putschists behind the 2016 coup attempt and Gülen. Correspondence between Hakan Çiçek, a Gülenist captured at Akıncı Air Base which was used as command center by the putschists in the capital Ankara, and the son of Cevdet Türkyolu, will also be presented to the delegation. It is believed that Çiçek texted Türkyolu, who serves as Gülen's right-hand man and resides with him in Pennsylvania. One text sent a few hours before Çiçek was captured calls Türkyolu to have him arrange a phone call with Gülen, citing "a matter of life and death."

FETÖ used its "imams," or point men, to activate its infiltrators in the military for its bid to seize power on July 15, 2016, investigations have revealed. Adil Öksüz, a fugitive like Gülen, is accused of masterminding the coup attempt. Disappearing after his controversial release hours after he was captured at the air base, Öksüz held meetings with the senior cadre of putschists according to witnesses. Prosecutors say he frequently visited Gülen in his Pennsylvania retreat. He is currently on the Interior Ministry's most wanted list, with the ministry offering up to TL 4 million (nearly $981,000) for tips leading to his capture.

Hakan Bıyık, a colonel who confessed his ties to the terrorist group and his attendance of "coup meetings" in an Ankara villa with other military officers, revealed Öksüz's role in the coup attempt. "Öksüz told us that Gülen instructed the generals, FETÖ's infiltrators in the military, to convince [Chief of the General Staff] Hulusi Akar to join the coup," Bıyık told a court in a February hearing in the trial of 227 defendants involved in the brutal attempt. "Failure was not an option. When we talked about what we would do if the plan failed, Öksüz told us 'Let's not think the worst,'" Bıyık told the court. Öksüz reportedly told them that he would present the plans to Gülen for his approval. "One day, he told us he had a phone conversation with 'our respected elder' and that he sent us his greetings. He was referring to Gülen," Bıyık said in his testimony.