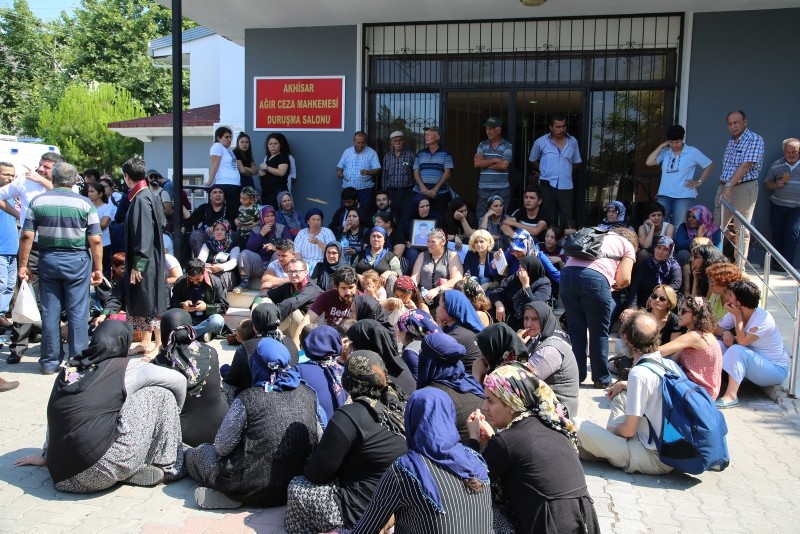 A Turkish court issued long-awaited sentences Wednesday in the trial of Turkey's deadliest mining disaster in Soma district of western Manisa province that killed 301 workers in 2014. The sentences angered families of victims who disrupted the hearing with loud protests.

The heavy penal court in neighboring Akhisar district sentenced the CEO of Soma Kömür İşletmeleri (Soma Coal Enterprises), Can Gürkan to 15 years in prison.General manager Ramazan Doğru and deputy operations manager Ismail Adalı were jailed for 22 years and 6 months each and operations manager Akın Çelik was jailed for 18 years and 9 months. The mine's engineer Ertan Ersoy also received a sentence of 18 years and 9 months in jail.

In addition, safety technician Mehmet Ali Günay Çelik was sentenced to 11 years and 8 months, mine engineers Yasin Kurnaz and Hilmi Kazık were sentenced to 10 years and 10 months, board member Haluk Sevinç and employees Hilmi Karakoç, Mehmet Erez, Hüseyin Alkan and Fuat Ünal Aydın to 8 years and 4 months and Murat Bodur to 6 years and 3 months in jail.

Out of 51 defendants, 14 were sentenced to jail while 34 others were acquitted.

Delays in the investigation and trial process had frustrated families of the victims since the start of the trial in 2015. Tensions rose in the courtroom in Manisa's Akhisar district as the verdict was read out and some among the people watching the trial fainted, forcing judges to adjourn the hearing briefly. Lawyers left the hall in protest after the first verdicts. They had repeatedly asked for life imprisonment for a total of 11 of the more than 40 defendants on trial.

The family members of the killed miners screamed angry protests and booed the judges outside the courtroom, footage on social media showed.

When the judges re-entered the courtroom, some among the audience hurled water bottles at them. Gülsüm Çolak, the mother of victim Uğur Çolak said they "could not find justice" in the trial.

"They put justice in a coffin and buried it like our children," she told reporters outside the courthouse after the trial.

Ali Arslan, the head of the Manisa Bar Association whose lawyers represented the victims' families, said the verdict failed to alleviate the pain of the families and noted that the judicial process is not over yet, citing they would appeal.

The verdicts given by the Akhisar court were far lighter than sought by prosecutors when the trial started in April 2015. Prosecutors had then requested that the top managers be sentenced to 25 years in prison for every single one of the 301 victims.

An explosion at a coal mine in Soma in western Manisa province caused a fire that burned for two days and trapped nearly 600 workers underground.

The defendants faced charges of manslaughter and negligence of safety measures, according to the final plea by the prosecutor. Throughout the hearings this week in a Manisa courthouse, they maintained their innocence, claiming it was not clear what caused the fire, while some defendants denied responsibility for work safety.

On May 13, 2014, an explosion started a fire about 2 kilometers (1.2 miles) below the entrance of the mine, causing it to fill with toxic gas. Following the disaster, the government took a series of measures to ensure better work safety and tighter inspections in privately run mines that critics say often ignore costly safety measures to keep profits high.

Turkey paid more than TL 24 million ($8.1 million) to the surviving workers and families of victims, as well as salary support for six months, along with monthly payments designated for those workers who die in occupational accidents. The government also offered public sector jobs for the relatives of victims, as part of efforts to help families where deceased workers were often the sole breadwinners for their households.