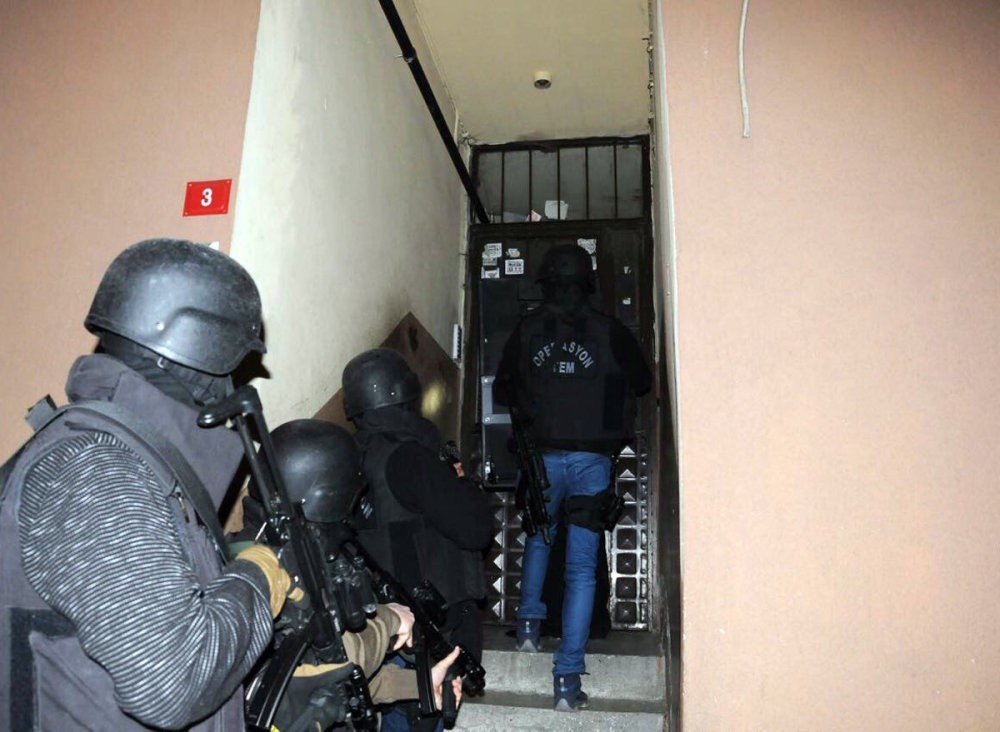 Counter terrorism police raid a house in an operation against Daesh in Istanbul in this undated photo.
by daily sabah
Jul 24, 2018 12:00 am

Police in Istanbul revealed yesterday that 43 foreigners, all suspected members of the terrorist group Daesh, were detained in last week's simultaneous raids against foreign fighters

Dealing another blow to Daesh's reliance on foreign fighters, police in Istanbul captured 43 suspects in last week's operations against foreign members of the terrorist group.

Istanbul police announced yesterday that a counterterrorism unit launched simultaneous raids on 15 homes on July 20 in the city's Küçükçekmece, Beykoz, Sultangazi, Fatih, Pendik, Üsküdar, Sarıyer, Şişli, Sultanbeyli, Zeytinburnu, Tuzla and Esenyurt districts to capture the suspects. The suspects' nationalities were not disclosed but all were "linked to Daesh and had contacts in conflict zones [areas where Daesh is active including Iraq and Syria]." Suspects also took part in "social media propaganda" for the group, police sources said.

The operations came two weeks after Istanbul police captured five suspects, including Seda Dudurkaeva, wife of Abu Omar al-Shishani, a senior figure of Daesh who is said to have been killed in Iraq two years ago.

Foreign fighters have long been a source of concern for countries fighting against the terrorist group and affected by its attacks. Turkey has deported almost 5,600 foreign fighters from 95 countries, while 54,000 suspects were banned from entering the country in recent years. Most hail from the European countries.

Turkey shares a border with Iraq and Syria, two countries where the terrorist group rose to prominence amid regional turmoil. Ankara has been at the forefront of the efforts to contain Daesh, which has launched a string of attacks in the country over the past three years. The latest attack targeted a popular nightclub in Istanbul in 2017 when a lone Daesh militant gunned down 39 people. Since then, operations against the group escalated. From Istanbul to cities bordering with Iraq and Syria, security forces regularly carry out operations against the group. Also yesterday, three Iraqis suspected of having links with Daesh were detained in the central Turkish city of Nevşehir. They were released under judiciary control.

In April, a Daesh "emir," or a senior leader for the group, was captured in the western city of İzmir as he was planning to secretly travel to Europe.

As Daesh emerged amid a conflict in Syria that made its borders insecure, Turkey warned against the flow of foreign fighters into the country. Ankara has repeatedly called for better cooperation with security services of European countries to stop the flow, while it was revealed that several suspects involved in Daesh attacks across Europe were found to be deported by Turkey earlier. For instance, Ibrahim al-Bakraoui, one of the bombers involved in the 2016 Brussels bombings, was deported by Turkey in 2015 and Belgium had been warned about the potential threat he posed.

Turkish media outlets reported last week that police were on alert against a group of Daesh militants allegedly planning to cross into Turkey secretly after escaping a prison in Syria's Idlib.

Though Daesh lost many strongholds in Iraq and Syria, a controversial deal between Daesh militants and Syrian groups linked to the PKK, a major terrorist group that carries out attacks in Turkey, helped facilitate their safe evacuation from Raqqa, Syria. Turkey shares a lengthy border with war-torn Syria and struggles to keep itself safe from infiltration despite a giant border wall that is currently under construction.