Bowing to evangelical pressure, US endangers relations with Turkey over FETÖ-linked pastor 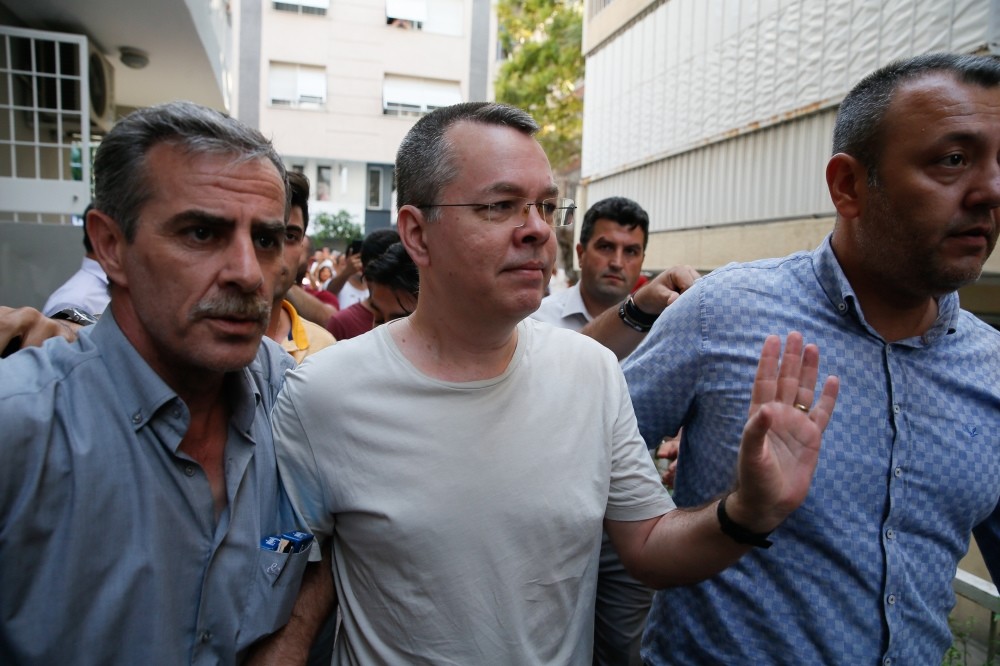 The case of an evangelical pastor jailed for terror links in Turkey was turned into a sanctions threat by the United States, where evangelicals pressed the Trump administration to punish Ankara if the pastor was not released

The United States administration has bowed to pressure from evangelicals and threatened to impose sanctions on Turkey over the case of Andrew Craig Brunson, a North Carolina evangelical pastor arrested in Turkey on espionage and terror charges. Using unprecedented rhetoric against Turkey, the United States resorted to threats to win the release of Andrew Craig Brunson, who was placed under house arrest on Wednesday. "The United States will impose large sanctions on Turkey for their long time detainment of Pastor Andrew Brunson, a great Christian, family man and wonderful human being. He is suffering greatly. This innocent man of faith should be released immediately!" Trump tweeted, minutes after Vice President Mike Pence tweeted a similar threat.

Earlier, U.S. Secretary of State Mike Pompeo said house arrest was "not enough" and called on Turkish authorities to "resolve his case immediately in a transparent and fair manner." Trump's remarks followed a phone call with Turkish President Recep Tayyip Erdoğan earlier in the day. Turkish officials said both leaders reiterated their stance on the issue with Trump repeating U.S. call for Brunson's release while Erdoğan reminded him about the ongoing legal process. Brunson was arrested in September 2016, in the aftermath of the July 15, 2016 coup attempt in Turkey blamed on Gülenist Terror Group (FETÖ).

He is accused of links to FETÖ as well as the PKK terrorist group, along with political espionage. He was a pastor at the Evangelic Resurrection Church in the western city of Izmir before his arrest.

Turkey's Foreign Minister responded by saying that Turkey was governed by the rule of law. "We will never tolerate threats from anybody," Mevlüt Çavuşoğlu said on Twitter.

"No one can threaten or give orders to Turkey," said Hami Aksoy, a spokesman for the ministry. Turkey has shown political will to improve relations with the U.S., he said, calling on Washington to engage in dialogue.

President Spokesperson Ibrahim Kalın also warned Washington over its threatening language and said the U.S. administration will not "reach desired results by threatening Turkey over an issue which falls within the jurisdiction of our country's independent judiciary."

The spokesman also criticized the U.S. for not taking any steps against FETÖ.

The U.S. administration, which has taken no steps whatsoever against the terrorist group FETÖ until today, must understand that it cannot reach desired results by threatening Turkey over an issue, which falls within the jurisdiction of our country's independent judiciary.

Evangelical Christians have long lobbied for Washington to exert pressure on Ankara to secure Brunson's release and Trump's decision to greenlight sanctions shows the risks he is willing to take in order to avoid displeasing the evangelicals. Anti-American sentiment is already on the rise in Turkey, as surveys after the 2016 coup attempt show, linking the rise to Washington's reluctance to hand over FETÖ leader Fetullah Gülen.

A court in Izmir has ordered his imprisonment to be commuted to house arrest, citing Brunson's health problems. He will be also fitted with an ankle monitor and barred from leaving the country. He is scheduled to appear before a court in October for his third hearing, after the court rejected an appeal for his release in a July 18 hearing.

Witnesses in the case claimed Brunson had harbored PKK supporters in his church and coordinated a U.S. arms shipments to a group affiliated with the PKK in Syria. The indictment against Brunson also says he had contact with Bekir Baz, a fugitive senior member of FETÖ who was in charge of the group's network in Izmir. Turkish prosecutors say Brunson used his guise as a pastor to commit crimes for terrorist groups and coordinated actions with them. Apart from Baz, Brunson also contacted Murat Safa, a Turk who was "an aide" of Baz within FETÖ and Taner Kılıç, another FETÖ-linked man who is being tried for membership of a terrorist group. The indictment also includes a text message by Brunson to an unidentified U.S. soldier. Brunson says in the message that they would "win in the end" while speaking about the July 15 coup attempt.

The Brunson case has been a thorny issue between Washington and Ankara. Washington has called on Ankara to release him, ignoring the fact that the judiciary is independent from the political administration. In a tweet after last week's hearing, Trump claimed Brunson has been "held hostage" and urged Erdoğan "do something to free this wonderful Christian husband and father."

Turkey's counterterrorism fight has repeatedly faced obstructions and objections from the U.S. Washington went the extra mile and briefly suspended visas for Turkish citizens when Metin Topuz, an employee at the U.S. Consulate in Istanbul, was arrested for links to FETÖ last year. Scathing remarks from U.S. officials on the arrest of Topuz again drew the ire of Ankara, who in return pointed to the independence of the country's judiciary.

Threatening sanctions at every opportunity against its ally is nothing new for the United States but it is the first time that the U.S. president has openly voiced them. A group of U.S. lawmakers earlier tried to push sanctions against Turkey over the imprisonment of Brunson and Turkey's move to purchase Russian S-400 missile system.