9 sentenced to life for each victim of 2015 Ankara bombings, worst Daesh attack in Turkey 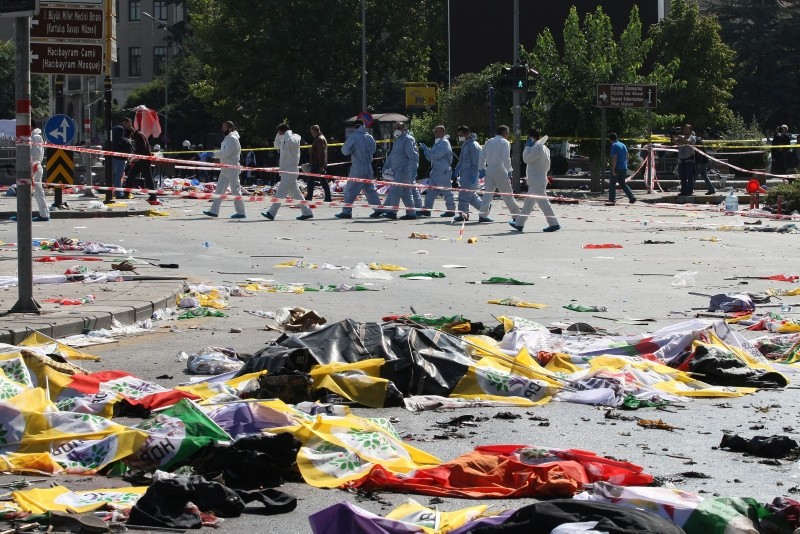 The trial concerning the 2015 Ankara bombings, the worst Daesh attack in Turkey that killed 100 people, concluded Friday with 101 instances of aggravated life imprisonment for nine defendants

A Turkish court has handed down multiple aggravated life imprisonment and 10,557 years in prison to the nine defendants involved in the Ankara train station bombings on Oct. 10, 2015.

The bombings were the worst Daesh attacks in Turkey. A total of 36 people were on trial for orchestrating the suicide bombings and helping the assailants.

Two suicide bombers targeted a crowd gathered for a peace rally organized by the pro-PKK Peoples' Democratic Party, main opposition Republican People's Party (CHP) and several labor unions in front of the city's main train station. Some 100 people were killed, and more than 400 people were injured in the twin blasts.

The Fourth High Criminal Court in the capital Ankara handed down one instance of aggravated life imprisonment for each of nine defendants on charges of "violation of the constitutional order," which defines acts of terrorism and 100 instances of aggravated life imprisonment for manslaughter. The same nine defendants were handed down 10,557 years of prison terms for attempting to kill 391 people, including 20 children. Additional prison terms were handed down to defendants for the membership of a terrorist group.

Two suicide bombers in the October 2015 attack were identified as Yunus Emre Alagöz, a Turkish national, and an unidentified Syrian.

Yunus Emre Alagöz was the brother of Abdurrahman Alagöz, the Daesh suicide bomber who blew himself up on July 20, 2015, in southeastern Turkey's Suruç, killing 32 members of a far-left group affiliated with the HDP. Fifteen days before the Suruç bombing, Daesh targeted an HDP rally in the southeastern city of Diyarbakır.

All defendants in the case are Turkish citizens, with the exception of a Kazakh suspect. Mehmet Kadir Cebael, one of the defendants, blew himself up when anti-terror police cornered him in a house in the city of Gaziantep in 2016. Three police officers were killed in the explosion. Some suspects still remain at large.

Since its rise in Iraq and Syria, Daesh has repeatedly threatened Turkey with attacks and carried out a string of suicide bombings in the country. In June 2016, 47 people were killed in bombings at Istanbul's Atatürk International Airport and an August attack targeting a street wedding in Gaziantep in the southeast killed 57 people, including 34 children. The last large-scale Daesh attack was during a New Year's Eve celebration at a nightclub in Istanbul in 2016. A lone Daesh militant gunned down 39 people weeks before he was captured.

Turkey has since stepped up its crackdown on the terrorist group following the attacks, targeting sleeper cells in Ankara, Gaziantep and other cities. Hundreds were detained or arrested in operations against Daesh in the past two years.

On Friday, 38 foreigners, whose nationalities were not disclosed, were captured in counterterrorism operations in Istanbul. They were accused of planning attacks in the city.

Embattled by counterterrorism operations in Syria and Iraq, the terrorist group has seen its numbers dwindle even further with heightened crackdowns in Turkey. In the past nine months, security forces detained more than 5,400 suspects and arrested more than 900 others in operations, while another 146 Daesh militants were "neutralized" in the same period.

Since November 2017, Turkey has stopped more than 5,040 foreigners seeking to join Daesh by crossing into Syria and Iraq through Turkey and sent them back to their countries of origin. Security forces have also foiled 10 attack plots. Figures show that some 18,500 suspects were being monitored for links to the terrorist group.