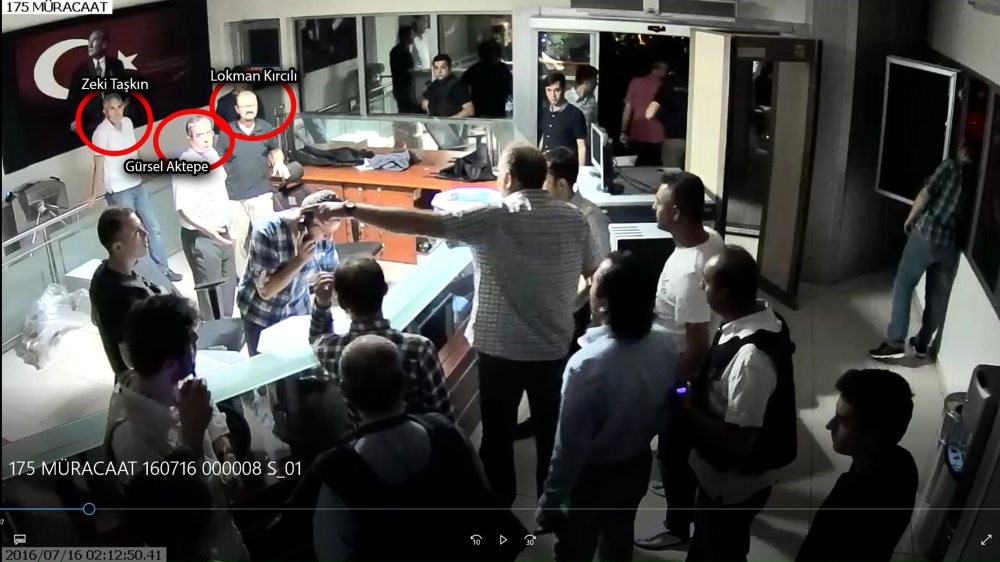 Zeki Tau015fku0131n, Lokman Ku0131rcu0131lu0131 and Gu00fcrsel Aktepe, three former high-ranking police officers linked to FETu00d6 were captured by security cameras inside the headquarters of the Ankara police department during the 2016 coup attempt.
by Daily Sabah Aug 08, 2018 12:00 am

In a new indictment, prosecutors in Ankara have accused a group of former police intelligence officers and other suspects of aiding the July 15, 2016 coup attempt, carried out by the military infiltrators of the Gülenist Terror Group (FETÖ).

The indictment includes evidence of contact between the officers and Mehmet Partigöç, a former general who was a member of the putschists' Peace At Home Council, and theft of some 400 terabytes intelligence data for the terrorist group.

The Ankara headquarters of the Directorate of Intelligence of Turkish police were among the putschists' many targets. Several former police chiefs linked to FETÖ were captured while trying to help putschists take over the building on July 15, 2016.

The indictment implicates some 36 suspects, almost all of them former police intelligence staff. They are also accused of attempting to disrupt the intelligence network of police, in a bid to help the coup plotters. Of them, 27 suspects face aggravated life imprisonment on coup charges.

Mustafa Koçyiğit, one of the 36 suspects and a computer engineer who worked at police intelligence, was found out to be one of the users behind "fuatavni," the infamous Twitter account created by FETÖ members to defame the government.

Former Ankara deputy police chief Lokman Kırcılı and former police chief Zeki Taşkın, who was captured near the police intelligence headquarters on July 15, 2016, are also among the suspects, along with former Deputy Director of police intelligence department Gürsel Aktepe. Prosecutors said the suspects "sought to organize an armed group" to help the coup plotters during the attempt. Mustafa Koçyiğit is accused of controlling FETÖ infiltrators working as computer engineers at the police intelligence and relayed them the orders of Fetullah Gülen, the U.S.-based head of the terrorist group. One message sent by Koçyiğit to a fellow engineer linked to FETÖ two days before the coup attempt read "let's debate the issue first here and then we can ask HE [abbreviation for Hocaefendi, a moniker for Gülen]. We can ask if a system freeze will be needed," apparently in reference to shutting down the digital intelligence network to help the putschists.

Burak Açıkalın, one of the suspects who confessed his ties to FETÖ, told investigators that Koçyiğit occasionally asked him to retrieve information on certain people and he used to send all the needed data through a messaging app.Haşim Türker, another suspect, said he did the same for Koçyiğit. Koçyiğit himself blamed a senior FETÖ figure he identified as "Selahattin," for the theft of intelligence data.

An investigation of messages sent through Eagle app, found in the cellphones of the suspects, shows a string of messages by one FETÖ member identified as Fatih Ömek, a senior member of the terrorist group who urged fellow Gülenists to help putschists. "My dear brothers, soldiers [have] started their intervention. Leave whatever you do now and help the soldiers. Do not resist them and prevent police from resisting the soldiers," one message read.

Another message tells serving police officers not to "obey orders from their superiors to resist [the coup]" and calls FETÖ infiltrators in the law enforcement to go to the "army headquarters." "Inform everyone, including the retired," read another message, urging everyone to "grab their arms and shoot down anyone resisting [the coup]."

Most police officers accused in the indictment were those expelled from the law enforcement or suspended for their links to FETÖ, in the aftermath of a 2013 coup attempt by the terrorist group.

The most significant part of the indictment is the officers' links to Mehmet Partigöç, a brigadier general who was stationed at the Office of Chief of Staff at the time of the coup attempt. Partigöç was a member of putschists' Peace At Home Council and it was him and another high-ranking officer who sent "martial law directives" to military units all across the country. He was arrested following the coup attempt and currently faces multiple life sentences. A testimony by Gürsel Aktepe in the indictment shows he received a message from a fellow former police intelligence officer to help putschists and "contact General Mehmet" for how to aid putschists.

Partigöç's phone number was found on Aktepe's tablet computer when he, Taşkın and Kırcılı were captured near the police intelligence headquarters on July 15, 2016.

Fetullah Gülen is accused of orchestrating the coup plot and masterminding the effort to seize power in Turkey. Prosecutors in cases against FETÖ say Gülen employed the group's infiltrators in the military and "imams," the group's civilian handlers for infiltrators, to carry out the attempt.

Adil Öksüz, a theology lecturer who remains at large, is accused of planning the coup attempt along with Partigöç and other members of the putschists' council, on behalf of FETÖ.