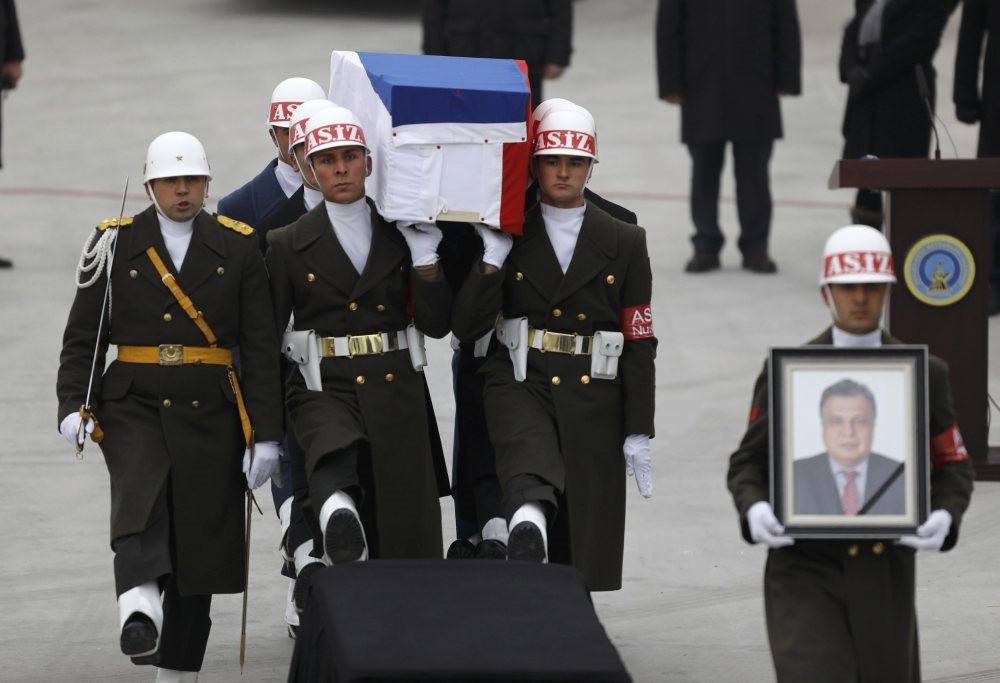 Police in Ankara arrested a woman in connection with the 2016 murder of Russian Ambassador Andrey Karlov, bringing the total number of arrests to 10 in the probe investigating the FETÖ terrorist group's link to the assassination

Authorities yesterday ordered the arrest of Ayşe Söğüt, a suspect in the 2016 assassination of Russian Ambassador Andrey Karlov in Ankara. She is the wife of Şahin Söğüt, handler of Karlov's assassin on behalf of the Gülenist Terror Group (FETÖ). Mevlüt Mert Altıntaş, an off-duty police officer linked to the group, shot Karlov dead on Dec. 19, 2016 while the envoy was attending an opening ceremony for an exhibition in the capital Ankara. Altıntaş was killed by police in an ensuing shootout at the art gallery where the exhibition was being held.

Ayşe Söğüt was recently detained, but an Ankara court ordered her release, pending judiciary control. Prosecutors objected to it and another court reviewing the prosecutor office's request ruled for the woman's arrest. Apart from her husband's links to the terrorist group, Ayşe Söğüt was a user of ByLock, an encrypted messaging app exclusively used by FETÖ for secret communications. She also worked in several FETÖ-linked companies, prosecutors say.

Her husband Şahin Söğüt, a former employee of the Information and Communication Technologies Authority (BTK), Turkey's telecoms watchdog, was Altıntaş's "brother," a term used for handlers of FETÖ's infiltrators in law enforcement, the military, judiciary, etc. FETÖ is accused of orchestrating plots, from a 2016 military coup attempt to sham trials through its infiltrators directed by "brothers." Şahin Söğüt was among nine people arrested in connection with Karlov's murder and is accused of relaying an order of assassination by senior figures of the terrorist group to Altıntaş. Other suspects include former policemen, exhibition curator Mustafa Timur Özkan and Hayreddin Aydınbaş, the head of a media company.

A Turkish court presiding over the Karlov case has already implicated FETÖ leader Fetullah Gülen, who has lived in the U.S. since 1999; Emre Uslu, a renowned figure of the terrorist group who fled to the U.S. before the coup attempt; and Şerif Ali Tekalan, another senior FETÖ member who now presides over a university in the U.S. Apart from standard terrorism charges, the suspects are accused of homicide and will likely be sentenced to life if found guilty. Media outlets reported that the investigation that traced Altıntaş's connections to FETÖ's point men is being closely watched by Moscow. Şerif Ali Tekalan, who fled to the United States while running a FETÖ-linked university in Istanbul, was found to have ties with Mustafa Timur Özkan. Emre Uslu, who is known for his notorious pro-FETÖ propaganda posts online, is accused of diverting attention from FETÖ's involvement in the case. Prosecutors told the court that multiple pieces of evidence, from digital material in Altıntaş's possession to testimonies of suspects linked to FETÖ, pointed to his membership in the terrorist group, and the murder was "committed to serve the interests of FETÖ."

The United States, where the terrorist group runs a network of charter schools, is among the favorite safe havens for fugitive FETÖ members. Gülen himself lives in a luxurious retreat in Pennsylvania, in the company of other senior figures of the terrorist group who are wanted by Turkey.

The assassination occurred at a time of improvement between strained Turkish and Russian relations. Since the murder, Ankara and Moscow gradually made progress in rebuilding their ties, which had been previously derailed by the 2015 downing of a Russian fighter jet over the Syrian border by the Turkish military.