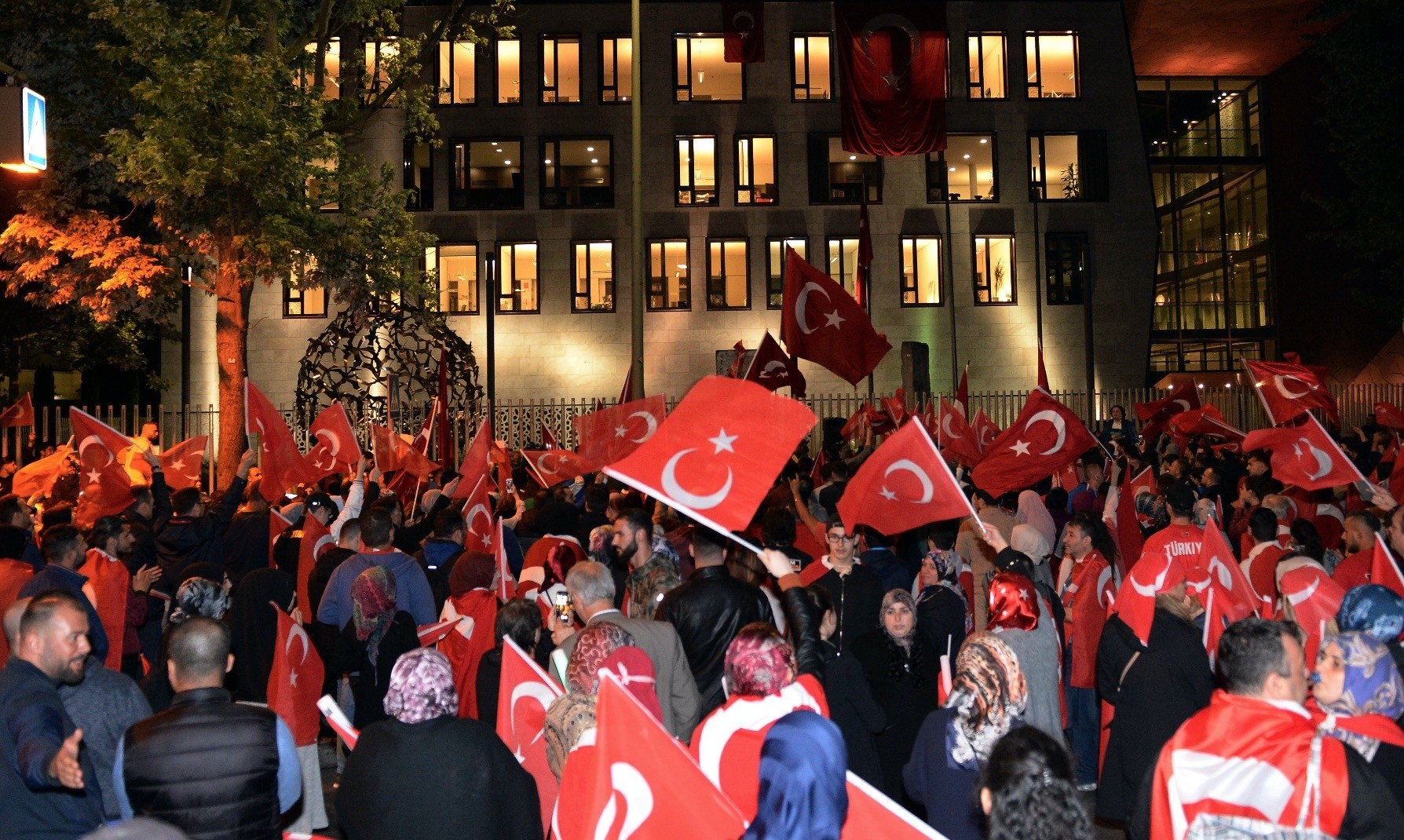 Turks stage a rally in Berlin on the first anniversary of the 2016 coup attempt. FETu00d6 is accused of using its infiltrators in the military for the attempt that killed 250 people.
by Daily Sabah Sep 20, 2018 12:00 am

Government officials in Germany, where hundreds linked to the 2016 coup attempt in Turkey sought shelter, confirmed that Turkey requested hundreds of search and arrest warrants for fugitive suspects but they did not disclose if the requests were approved

German authorities acknowledged that Turkey filed for arrest and search warrants for hundreds of fugitives in the aftermath of July 15, 2016 coup attempt but they did not disclose the status of those requests.

Replying to a question by the Left Party lawmakers, the government said in a written response published by German media that Turkey, via Interpol, sought 848 search warrants (to be carried out by German police) and asked for the arrests of 791 suspects after the coup attempt perpetrated by the Gülenist Terror Group (FETÖ). Turkey also asked German authorities to locate wanted suspects in 57 instances. Germany's Ministry of Justice said there were no statistics available on how many of the requests were met.

The German Interior Ministry earlier announced that 296 people bearing diplomatic passports and 881 others with service passports - issued to public sector employees, soldiers et cetera - applied for asylum in Germany from July 2016 to June 2018, and most are believed to be FETÖ infiltrators in the military and bureaucracy. Half of them were granted asylum.

Acting under the guise of a charity movement, FETÖ is widely tolerated in Germany where about 14,000 of its members who fled Turkey following the coup attempt and those who were settled in the country beforehand reside. Both federal and state governments embrace FETÖ members and turn a blind eye to their activities. It makes Germany a favored destination for the terrorist group whose members are being sought by Turkey around the world. While most of Turkey's other allies, especially countries in Africa, cooperate with Ankara in shutting down FETÖ schools and deporting the group's members, Germany often faces criticism from Turkish officials for its tolerant policy toward Gülenists. Along with the embrace by Berlin, FETÖ members find assistance from fellow members of the group in the form of non-profit organizations that seemingly aim to help "refugees." Aktion für Flüchtlingshilfe (Aid Action for Refugees), linked to FETÖ, helps the group's members learn German and find jobs and accommodation in the country.

Group members, who gave interviews to German media outlets, confirmed an exodus of Gülenists from Turkey to Germany in the aftermath of the thwarted coup attempt two years ago. Some senior figures in the group, such as Abdullah Aymaz and Mehmet Ali Şengül, who are among the most wanted terror suspects by Turkey, are known to be in Germany. Aymaz, who joined FETÖ while its leader Fetullah Gülen was still an obscure preacher working in İzmir in western Turkey, is a member of Gülen's inner circle. Gülen currently resides in Pennsylvania in the United States. Turkish media describe Aymaz as the "Europe imam" for FETÖ, a title given to senior figures in the group in charge of dozens and sometimes thousands of followers. He left Turkey shortly after FETÖ's first coup attempt in 2013 failed. A few months before the 2016 coup attempt, Aymaz penned an article in a FETÖ-linked newspaper, hinting at an imminent coup. Mehmet Ali Şengül, another high-ranking figure in the terrorist group, was one of the names to replace Gülen in case of his death, according to reports in Turkish media.

One of the most significant figures linked both to FETÖ and the 2016 coup attempt who is believed to be in hiding in Germany is Adil Öksüz. Öksüz is the alleged mastermind of the attempt. Anadolu Agency (AA) reported a few months ago that Öksüz, one of the most wanted men in Turkey, lives or lived in Berlin after the coup attempt.

Ankara has often accused Germany and other European countries for inaction on FETÖ members, particularly those who fled to Europe after the coup attempt.

After the coup attempt, FETÖ tried to keep a low profile in Germany amid a backlash from the Turkish community in the country. Half of the "study centers" that offer classes for Turkish children were closed down, while three out of 25 FETÖ-linked schools had to be closed when Turkish families pulled their children from those schools after the coup attempt.

The terrorist group also runs a lobby group in Germany to restore its tarnished image and is known to funnel millions of euros for PR campaigns in favor of what they called the Hizmet (Service) Movement. News portals, such as dtj-online, are among the mouthpieces of Gülenists who are mostly active in online media. The group also runs the online TV channel MCEU, which spreads Gülenist propaganda.