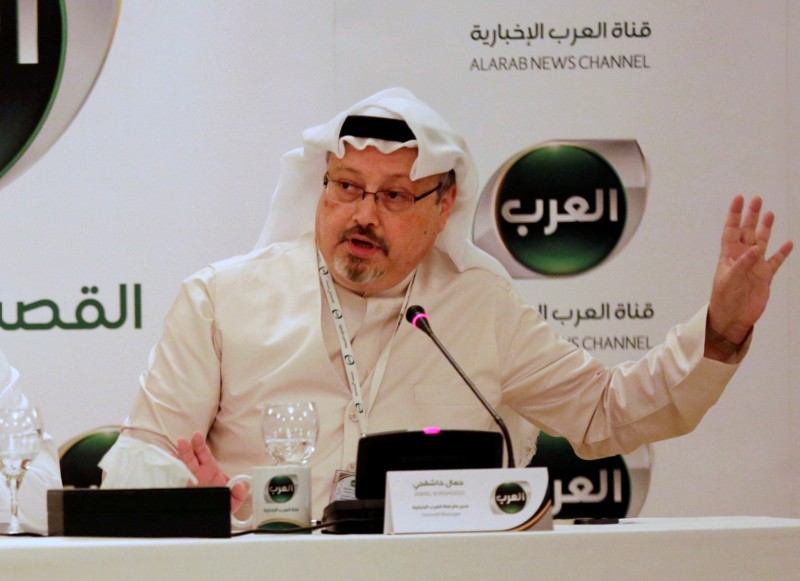 Turkish security sources say Jamal Khashoggi, a Saudi journalist known for his critical views of the Riyadh regime, was likely killed inside the Saudi consulate in Istanbul where he was last seen. President Recep Tayyip Erdoğan, meanwhile, vowed to make the result of investigation into his disappearance ‘known to the world'

As mystery over his disappearance continues, friends of Jamal Khashoggi and Turkish security sources say he was likely killed in the Saudi consulate he entered last Tuesday, and his body was secretly taken from there. Saudi officials, meanwhile, insist Khashoggi, a renowned journalist with critical views of the Saudi regime, left the premises before he disappeared. The 59-year-old journalist, who once served as an adviser to former officials of the Saudi regime, entered the consulate to get documents for his marriage to his Turkish fiancee. He told her to alert authorities if he did not return, apparently fearing for his life. He had already moved to the United States in self-imposed exile and was penning opinion pieces critical of Riyadh for the Washington Post. Turan Kışlakçı, a Turkish journalist who is a close friend of Khashoggi and one of many who has waited outside the consulate every day since his disappearance, told reporters yesterday that officials confirmed to them on Saturday that Khashoggi was killed. "We also heard he was brutally killed," he said. Media reports say his body was chopped to pieces before it was secretly taken from the consulate. Speaking to reporters yesterday, President Recep Tayyip Erdoğan said he was personally monitoring developments regarding the case.

Erdoğan said Khashoggi was a journalist he knew for a long time and it was worrying this happened to him in Turkey. "I still have good thoughts. By God's will, we will not come across an undesirable situation. I believe that people championing freedoms, freedom of thought will not let this case to be closed and will monitor it. As President of Turkey, I will monitor the case as well and we will let the world know whatever the result of [the investigation]," the president said. On the of question whether there was camera footage of Khashoggi leaving the consulate, Erdoğan said "everything" was under investigation, "from entries and exits to the consulate to arrivals and departures from the airport," he said, without specifying. "We want to have the results of the investigations swiftly," he said.

Quoting Turkish security sources, Anadolu Agency (AA) reported that 15 Saudi citizens, including "officials" arrived in Istanbul aboard two planes the day Khashoggi disappeared and visited the consulate before returning to their country. Turkish police have already opened an investigation into his disappearance and are investigating people who entered and left the consulate in the hours before and after Khashoggi went missing. Yasin Aktay was one of the names Khashoggi gave to his fiancee to "notify" if he did not return. Speaking to Reuters, Aktay said Turkish authorities believed the group of 15 Saudi nationals were "most certainly involved" in his disappearance.

"My sense is that he has been killed ... The Saudis are saying we can come investigate, but they have of course disposed of the body," he said, adding that he believed Saudi statements about a lack of footage from security cameras were insincere. Saudi Consul-General in Istanbul Mohammad al-Otaibi told Reuters on Saturday that the consulate's own security cameras showed only a live stream and did not record footage, so they could not provide evidence of Khashoggi's movements.

Khashoggi is a well-known critic of Crown Prince Mohammed bin Salman (also widely known as MBS) and his reform program, as well as the kingdom's policies toward Qatar and the war in Yemen. Considered a Saudi nationalist, Khashoggi previously served as editor-in-chief at Saudi newspapers al-Arab and Watan and as media adviser to Prince Turki al-Faisal during his terms as ambassador in Washington and London. He fled Saudi Arabia in 2017 and has been living in Washington over concerns about the Saudi government's crackdown on dissenting voices, particularly intellectuals and journalists. MBS headed a purge against fellow royals and prominent business figures last year, detaining dozens of tycoons on charges of corruption and demanded financial settlements. While MBS has attracted attention with his modernization campaign to roll back some of the kingdom's ultraconservative societal regulations, rights groups say the government has ramped up its crackdown on activists and dissenters. Speaking to Bloomberg on Friday, the Crown Prince said that the journalist left the consulate and Turkish authorities could search the building. "We have nothing to hide," he said, adding that they are "investigating through the foreign ministry to see exactly what happened at that time," referring to Khashoggi's time of "departure" from the consulate.

Jamal Khashoggi has maintained his ties with Saudi elites and launched a satellite news channel, Al-Arab, from Bahrain in 2015 with the backing of Saudi billionaire Prince Alwaleed bin Talal. The channel was on air for less than 11 hours before it was shut down. Its billionaire backer was detained in the Ritz Carlton roundup overseen by Prince Mohammed in 2017. As a contributor to the Washington Post, Khashoggi has written extensively about Saudi Arabia, including criticizing its war in Yemen, its recent diplomatic spat with Canada and its arrest of women's rights activists after the lifting of a ban on women driving.

Turan Kışlakçı says they would "react" if Khashoggi was killed by Saudi officials and said he hoped the "conscience of the international community would react too."

Reuters quoted a Turkish official who did not give his/her name on Saturday as saying that the initial assessment of the police was that Khashoggi has been killed at the consulate. "We believe that the murder was premeditated and the body was subsequently moved out of the consulate."

Four luxury vehicles arrived at the consulate, which was closed for a holiday, yesterday and these vehicles left after about two hours. Media outlets reported that the occupants of the vehicles were Saudi police officers who were earlier arrived in Turkey.

The consulate also released a statement on its Twitter account yesterday denying allegations that Khashoggi was killed at the consulate. The same statement also said a security delegation had arrived in Istanbul on Saturday to join the investigation into disappearance of Khashoggi. It also said the kingdom was very sensitive and careful about "safety of its citizens wherever they are in the world."