Khashoggi’s fiancee tells of their love, last moments together 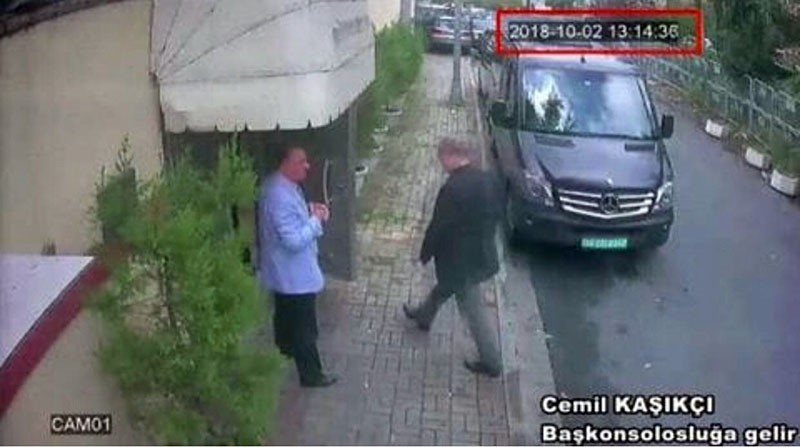 The Turkish fiancee of missing Saudi journalist Jamal Khashoggi has shared more about the days leading up to his disappearance – their meeting, engagement and then the sickening moment when she alerted Turkish authorities he had not emerged from the Saudi consulate in Istanbul.

Nearly a week after her fiance's disappearance, Hatice Cengiz sat for an interview with the Washington Post, the U.S. paper for which Khoshoggi was a columnist.

The 36-year-old, scared and sleep-deprived, was accompanied by two Turkish police officers during the interview in Istanbul.

Cengiz says she didn't go to her doctorate classes in order to accompany Khasoggi to the consulate on Oct. 2, the last day he was seen. In the taxi, the couple talked about their future together.

Khashoggi, 58, had asked Cengiz's father for her hand in marriage last month, and he had consented, despite initial hesitance due to the age gap. The couple had just finished furnishing their Istanbul apartment, which Khashoggi had bought for them.

"The house is beautiful, like its owner," his last text message to Cengiz read.

Cengiz and Khashoggi met in May at a conference in which the Saudi journalist spoke. Cengiz had asked Khashoggi a question after his talk, which led to a longer conversation afterward.

The two stayed in touch, meeting when Khashoggi was in Istanbul.

"The connection got stronger and stronger," Cengiz told the Post, showing selfies of the two together during the summer.

In order to marry a Turkish national, Khashoggi needed a document from the Saudi government proving he was divorced.

Khashoggi had expressed some apprehension about visiting the consulate, Cengiz said.

"He said at some point, 'Maybe it's better if I don't go.' He was worried that something might happen," she said.

But he decided to go. The first appointment went smoothly and he was asked to return the following Tuesday.

Cengiz said she realized something was wrong around 4 p.m., 30 minutes after the consulate's closing time.

Beginning to panic, she called a friend. "My friend told me that I didn't sound normal when I called her. I was out of my mind," she said.

"Where is Jamal," Cengiz asked a guard, then called the consulate asking the same question. "Jamal entered and didn't come out."

A man at the entrance told her there was no one inside.

Cengiz called an adviser of President Recep Tayyip Erdoğan, who Khashoggi had directed her to contact if anything went wrong. She then alerted Turkish police that her fiance was missing.

The police interviewed Cengiz that day, showing her a still from one of the security cameras – the image that was released to the public on Tuesday.

"Is this him?" the police asked. She identified the man in the image as Khashoggi, wearing a dark jacket.

She was interviewed again on Monday. Turkish authorities took some of Khashoggi's clothing and personal items for DNA samples, she said.

But still, she has not been told if he is dead or alive.

"As his fiancee, as someone close to Jamal and in love with Jamal, I am waiting for information from my government about what has happened to him," she said.

"It is the responsibility of Saudi Arabia to explain and prove how Jamal exited and from where and when," she added.

"I am not giving up hope. I hope we will soon learn what happened to him, and I still have hope that he is alive," she said.

"But I need to know, where is Jamal? I have to know what has happened to him."