Turkey, US media increase pressure on Saudi Arabia over disappearance of journalist 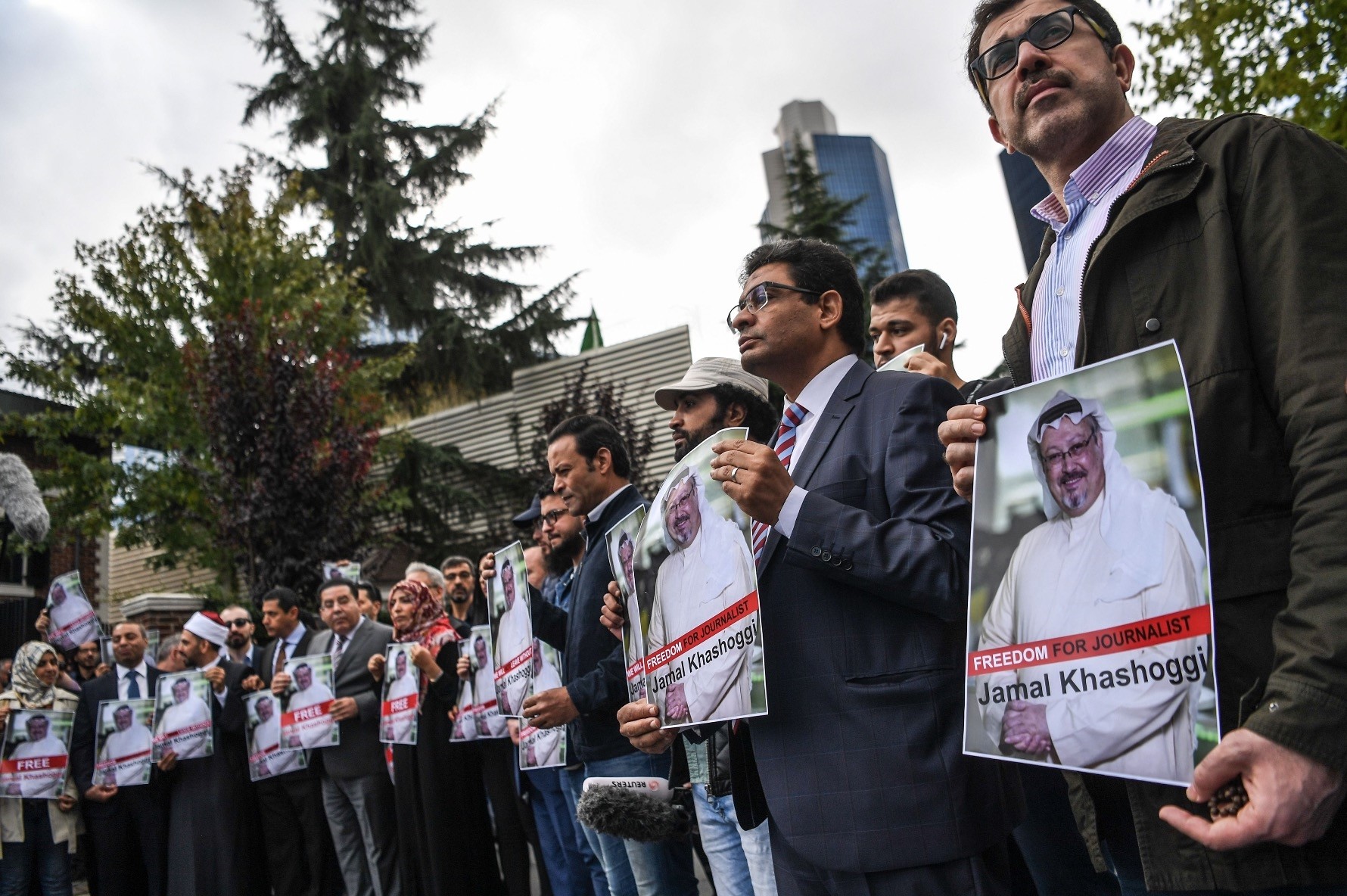 Protesters hold pictures of Jamal Khashoggi during a demonstration in front of the Saudi Consulate in Istanbul, Oct. 8.
by daily sabah
Oct 09, 2018 12:00 am

Jamal Khashoggi's colleagues at the Washington Post and fellow journalists in Turkey are seeking answers to what happened to him. The prominent Saudi journalist disappeared at the Saudi Consulate in Istanbul almost a week ago. Amid unconfirmed reports that he was murdered at the consulate, calls on Saudi Arabia for an explanation are growing

Rumors swirl as Saudi Arabia fails to convince the public over the disappearance of Jamal Khashoggi, a 59-year-old journalist who was once close to the Saudi regime but became critical of Riyadh's policies in his opinion pieces for the Washington Post. Khashoggi has been missing since he entered the kingdom's consulate in Istanbul last Tuesday. President Recep Tayyip Erdoğan, speaking yesterday in a joint press conference in Budapest with Hungarian Prime Minister Victor Orban, said it was up to the officials of the Saudi Consulate in Istanbul to prove that Khashoggi had left the compound safely. He demanded that Saudi officials provide the necessary security camera recordings and dismissed Saudi officials' claims that there was no such footage. "Saudi consulate officials cannot escape responsibility by simply saying that he left."

He added that Turkish law enforcement authorities were investigating exactly what happened to the journalist. "It is our political and moral duty to find out what happened to him," Erdoğan said. He also explained prosecutors were tracking the arrivals and departures of Saudi officials since Khashoggi went missing on Oct. 2. Unconfirmed reports say he was murdered at the consulate. His friends have staged rallies every day since his disappearance and called on the Saudis to shed light on his whereabouts. Turkish officials announced yesterday that the Saudi ambassador was summoned by the Foreign Ministry for the second time in a week on Sunday over the incident.

He was told that Turkey expected "full cooperation" on the issue. Authorities also asked permission for a search of the consulate. In an editorial published yesterday, the Washington Post called on the U.S. to "demand answers" from Saudi Arabia about Khashoggi and punish the kingdom if cooperation was lacking. "The U.S. must now make a concerted effort to determine all the facts about Mr. Khashoggi's disappearance," the Post said in an editorial, imploring Washington to "demand answers, loud and clear." Noting that U.S. President Donald Trump has treated Saudi Crown Prince Mohammed bin Salman as a "favored ally," the newspaper said the kingdom now should reciprocate with information about Khashoggi's whereabouts.

"If the crown prince does not respond with full cooperation, Congress must, as a first step, suspend all military cooperation with the kingdom," the Post said. It also said that Riyadh should explain the presence of about 15 Saudi nationals, some of them officials, who traveled to Istanbul and were at the consulate at the same time as Khashoggi.

"We are hoping against hope that Mr. Khashoggi is unharmed and will soon return to his writing desk," the Post said. "If the reports of his murder prove true, grief must be accompanied by accountability for those who carried out the murder and those who ordered it."

Media reports say two airplanes carrying 15 Saudi nationals arrived in Istanbul around the same time of Khashoggi's disappearance, fueling rumors that they were sent to dispose of the body. Khashoggi was at the consulate for paperwork he needed to marry his Turkish fiance.

"If the reports of Jamal's murder are true, it is a monstrous and unfathomable act. Jamal was - or, as we hope, is - a committed, courageous journalist. He writes out of a sense of love for his country and deep faith in human dignity and freedom. He is respected in his country, in the Middle East, and throughout the world. We have been enormously proud to publish his writings," Fred Hiatt, the Washington Post's editorial page editor, said in a statement on Oct. 6.

Outside the consulate, a group of activists and journalists yesterday repeated their call for the "release" of Khashoggi if he is detained or a statement about his fate. Yemeni journalist Tawakkol Karman said Saudi intelligence is responsible for the disappearance of Khashoggi.

"An international investigation is needed and all perpetrators [involved in the disappearance] should be found," she said. Karman called on the international community to exert pressure on Saudi Arabia on the issue. "If he is detained, we demand his release," she said.

Khashoggi is a well-known critic of Crown Prince Mohammed bin Salman (also widely known as MBS) and his reform program, as well as the kingdom's policies toward Qatar and the war in Yemen. Considered a Saudi nationalist, Khashoggi previously served as editor-in-chief at the Saudi newspapers al-Arab and Watan and as media adviser to Prince Turki al-Faisal during his terms as ambassador in Washington and London. He fled Saudi Arabia in 2017 and has been living in Washington over concerns about the Saudi government's crackdown on dissenting voices, particularly intellectuals and journalists.

MBS headed a purge against fellow royals and prominent business figures last year, detaining dozens of tycoons on charges of corruption and demanded financial settlements. While MBS has attracted attention with his modernization campaign to roll back some of the kingdom's ultraconservative societal regulations, human rights groups say the government has ramped up its crackdown on activists and dissenters. Speaking to Bloomberg on Friday, the crown prince said that the journalist left the consulate, and Turkish authorities could search the building. "We have nothing to hide," he said, adding that they are "investigating through the Foreign Ministry to see exactly what happened at that time," referring to Khashoggi's time of "departure" from the consulate.

Khashoggi has maintained his ties with Saudi elites and launched a satellite news channel, Al-Arab, from Bahrain in 2015 with the backing of Saudi billionaire Prince Alwaleed bin Talal. The channel was on air for less than 11 hours before it was shut down. Its billionaire backer was detained in the Ritz Carlton roundup overseen by MBS in 2017.

As a contributor to the Washington Post, Khashoggi has written extensively about Saudi Arabia, including criticizing its war in Yemen, its recent diplomatic spat with Canada and its arrest of women's rights activists after the lifting of a ban on women driving.

"It anguishes me to speak with other Saudi friends in Istanbul and London who are also in self-exile. There are at least seven of us - are we going to be the core of a Saudi diaspora?" Khashoggi wrote in a piece for Washington Post in September 2017. "We spend endless hours on the phone trying to understand this wave of arrests that have included my friend, businessman and thoughtful Twitter personality Essam Al-Zamil. It was just last Tuesday that he returned home from the United States, having been part of an official Saudi delegation. That is how breathtakingly fast you can fall out of favor with Saudi Arabia. It is all quite shocking. But this has not been business as usual in my country," the same column says. "It was painful for me several years ago when several friends were arrested. I said nothing. I didn't want to lose my job or my freedom. I worried about my family. I have made a different choice now. I have left my home, my family and my job, and I am raising my voice. To do otherwise would betray those who languish in prison. I can speak when so many cannot. I want you to know that Saudi Arabia has not always been as it is now. We Saudis deserve better," he continued in his column published on September 18, 2017.