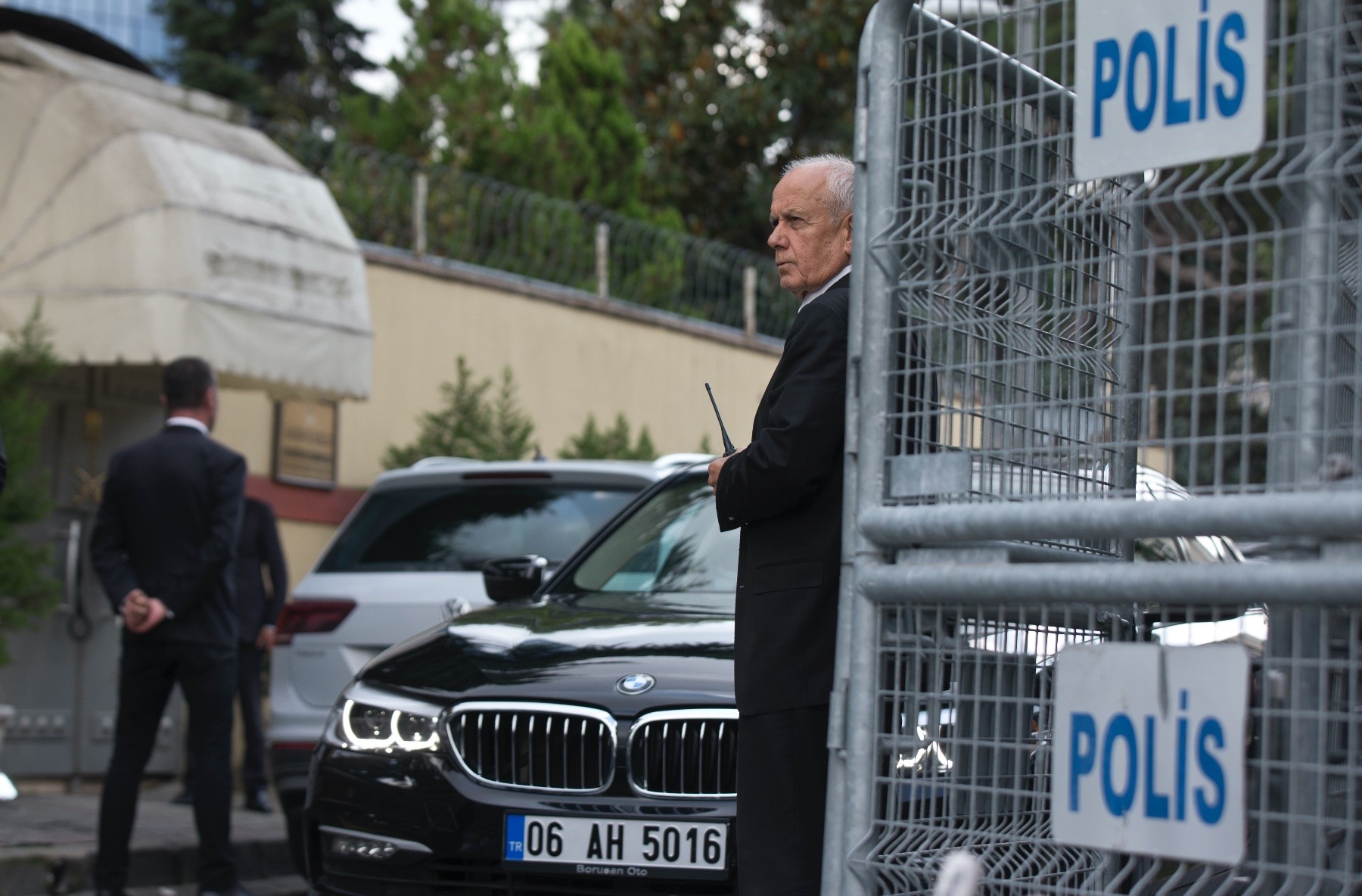 Security personnel stand at the entrance of Saudi Arabiau2019s consulate in Istanbul as the Khashoggi mystery further deepens.
by Daily Sabah with Wires
Oct 15, 2018 12:00 am

As leaders from across the world pressure the Saudis to cooperate in finding out what happened to journalist Jamal Khashoggi, and as U.S. President Trump warns of punishment, the kingdom remains defiant and has promised to retaliate against all actions

SaudI ArabIa warned yesterday that it will respond to any "threats," a day after U.S. President Donald Trump said that if the Washington Post contributor Jamal Khashoggi was killed there would be "severe punishment." Both the White House and the kingdom are under mounting pressure as concern grows over the fate of the veteran journalist, who hasn't been seen since he entered the Saudi Consulate in Istanbul on Oct. 2. The statement came after the Tadawul exchange in Riyadh dropped by 7 percent at one point during the week's first day of trading, with 182 of its 186 listed stocks showing losses by the early afternoon.

Turkish officials say they fear Saudi agents killed and dismembered Khashoggi after he entered the consulate, saying they have audio and video recordings of it that they have not released. The kingdom denies the allegations, but has offered no evidence the writer ever left the consulate.

In an interview, Trump told the CBS network's "60 Minutes" that the consequences of Saudi Arabia being involved would be "severe."

"There's something really terrible and disgusting about that, if that was the case, so we're going to have to see," Trump said. "We're going to get to the bottom of it and there will be severe punishment. As of this moment, they deny it and they deny it vehemently. Could it be them? Yes."

American lawmakers in both parties have been more critical of Saudi Arabia, with several suggesting officials in the kingdom could be sanctioned if they were found to be involved in Khashoggi's disappearance and alleged killing. Khashoggi, who was considered close to the Saudi royal family, had become a critic of the current government and Crown Prince Mohammed bin Salman, the 33-year-old heir apparent who has shown little tolerance for criticism.

As a contributor to the Post, Khashoggi has written extensively about Saudi Arabia, including criticism of its war in Yemen, its recent diplomatic spat with Canada and its arrest of women's rights activists after the lifting of a ban on women driving. During the week, many European countries voiced their concern over Khashoggi's fate.

Hatice Cengiz, the fiancee of Khashoggi, on Saturday called for accountability if he was killed. In an op-ed penned for The New York Times, Cengiz, a doctoral student in Istanbul, said that if the allegations are proven true, Khashoggi "is already a martyr" and his loss is "of every person with a conscience and moral compass."

"If we have already lost Jamal, then condemnation is not enough. The people who took him from us, irrespective of their political positions, must be held accountable and punished to the full extent of the law," she said. Meanwhile, local reports have claimed that authorities have an audio recording of Khashoggi's murder. Turkish authorities recovered the audio from Khashoggi's iPhone and his iCloud account, Turkish language Sabah daily said over the weekend. The journalist had given his phones to his fiancee before entering the consulate.

Also on Saturday, Ankara's top diplomat reiterated a call to Saudi Arabia to open up its consulate, from where Khashoggi disappeared, for Turkish authorities to search.

Reports have claimed that a 15-member Saudi assassination squad killed Khashoggi at the consulate. A Saudi-owned satellite news channel has begun referring to the 15-man team as "tourists," without providing evidence to support the claim. It echoes how Russia has described the men who allegedly carried out the Novichok nerve agent poisonings in Salisbury, England, in March.

A delegation from Saudi Arabia arrived in Turkey on Friday as part of a joint investigation into the writer's disappearance.

However, Foreign Minister Mevlüt Çavusoğlu said Saudi Arabia had not yet cooperated with Turkey on the search for Khashoggi. He said Turkish "prosecutors and technical experts must enter" the consulate "and Saudi Arabia must cooperate with us on this."

Earlier in the week, Saudi Arabia had said it would open the consulate for a search but that is yet to happen. Çavusoğlu said Turkey would share information with Saudi Arabia in the "joint working group" but stressed the Turkish investigation would continue separately.