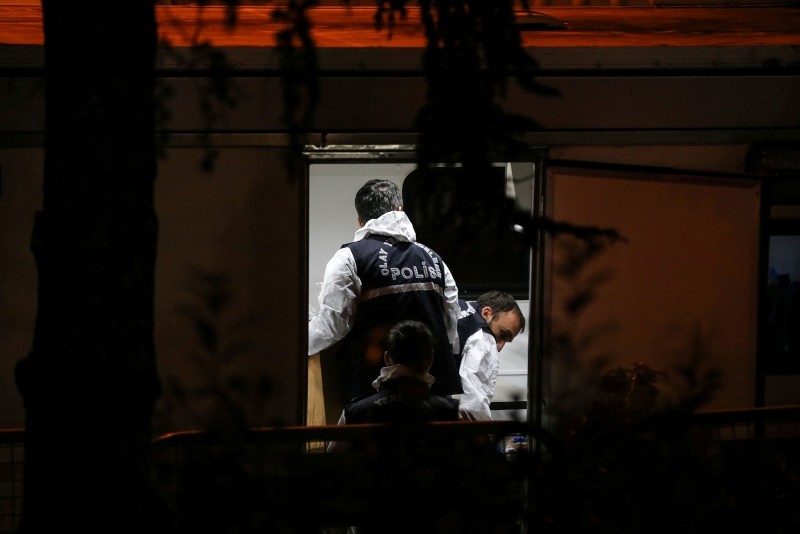 Officials arrive for an investigation into the disappearance of Saudi journalist Jamal Khashoggi at the Saudi consulate in Istanbul, Turkey, Oct. 15, 2018. (AA Photo)
by Daily Sabah with Wires
Oct 15, 2018 12:00 am

More than a dozen members of the Turkish-Saudi team investigating the disappearance of Washington Post journalist Jamal Khashoggi were seen entering the Saudi consulate in Istanbul late Monday.

An acting chief prosecutor and a public prosecutor were assigned by Istanbul Chief Public Prosecutor's Office to carry out the probe at the consulate.

Also, specialists from anti-terror branch and crime scene investigation units of Istanbul Provincial Security Directorate are included to the team.

Also on Oct. 2, 15 other Saudis, including several officials, arrived in Istanbul on two planes and visited the building while Khashoggi was also inside, Turkish police sources said. All of the identified individuals have since left Turkey.

"The kingdom also affirms that if it is (targeted by) any action, it will respond with greater action," it said.

Hours before the announcement, Tadawul exchange in Riyadh dropped by as much as 7 percent during the week's first day of trading, with 182 of its 186 listed stocks showing losses by the early afternoon. The market clawed back some of the losses, trading down over 4 percent later on.

Major news organizations such as CNN, the Financial Times, the New York Times, CNBC and Bloomberg have pulled out of the conference. The Fox Business Network, the lone Western news outlet still heading to the conference, told Reuters on Sunday it was reviewing that decision.

Uber Technologies Inc Chief Executive Dara Khosrowshahi, Viacom Inc CEO Bob Bakish and billionaire Steve Case, one of the founders of AOL, said they were no longer going to attend.