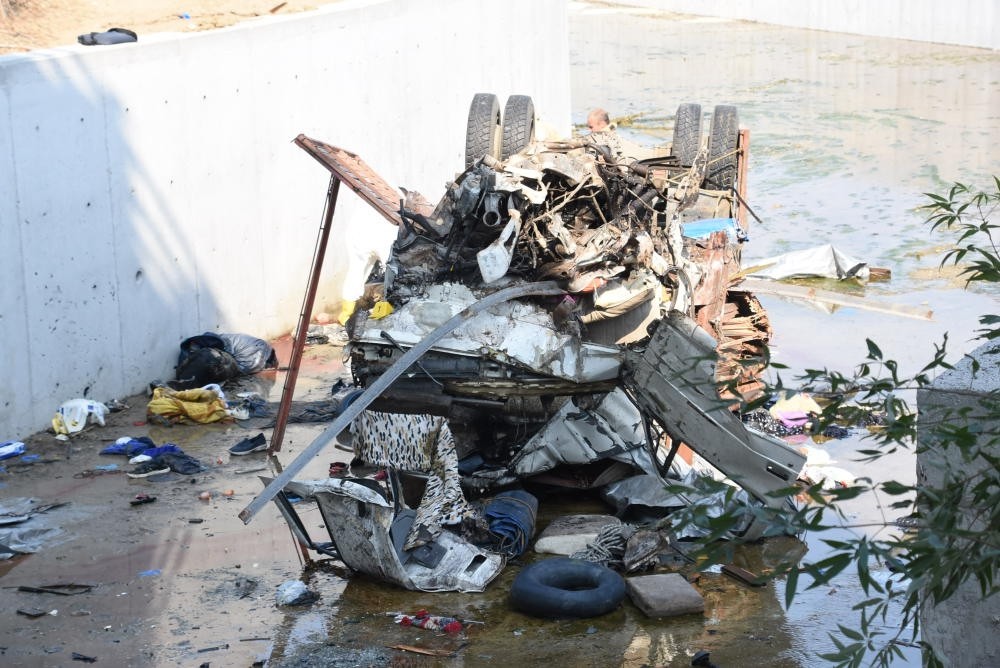 Police in İzmir detained five suspects yesterday as part of an investigation into a traffic accident that killed 22 irregular migrants, including six children. Reports indicated that three of the suspects are Syrian, while two are Turkish citizens.

The accident occurred Sunday in the İzmir's Menderes region on the Aegean coast when a truck carrying the migrants swerved out of control and broke through traffic barriers to fall several meters off an overpass into the slow-flowing Değirmençay Stream.

Thirteen others were injured in the accident.

Turkish television showed the scene of the wreckage, where the vehicle was reduced to burned-out metal and lifeless bodies were scattered around.

The injured driver, Mustafa Yılmaz, 35, was said to have fled the scene and hitchhiked to a hospital, where he was found by police. He admitted picking up the migrants in the neighboring province of Aydın.

Anadolu Agency (AA) reported the driver saying, "A white car suddenly turned toward me. When I hit the brakes, they didn't work. I tried to save us, but I lost control and the truck overturned."

The local public prosecutor's office launched a criminal investigation into the accident, and the driver will be sent to a local court after treatment.

It was the driver's testimony that led to the five suspects, according to reports.

Demirören News Agency said the vehicle was headed for the coast of the İzmir from where the migrants planned to take inflatable dinghies, which had been packed into the vehicle, to Greece's Samos Island. Samos is just a few kilometers north of Turkey's Dilek peninsula, which juts out from İzmir's coastline.

Turkey is a key transit point for migrants from troubled countries in the Middle East, Asia and Africa seeking a new life in Europe. A million migrants crossed from Turkey into Greece in 2015, mostly by boats, in a crisis that forced a deal between Ankara and the EU to stem the flow of people. Numbers have fallen since.

The deal has been in place despite the EU failing to keep its promises. In return for accepting any irregular refugee who entered the EU, Brussels was supposed to provide 3 billion euros in aid for the refugees. It also promised to lift visa restrictions for Turkish citizens.

Last week, eight migrants were found drowned off Karaburun district, also in İzmir province, after their boat capsized. Twenty-six others are still officially listed as missing after that accident, according to AA. After the disaster, four suspected smugglers were arrested following evidence given by an Iraqi who survived, AA reported. They had demanded a fee of $1,500 from each migrant.