Saudi king engages with Turkey, US to de-escalate Khashoggi crisis 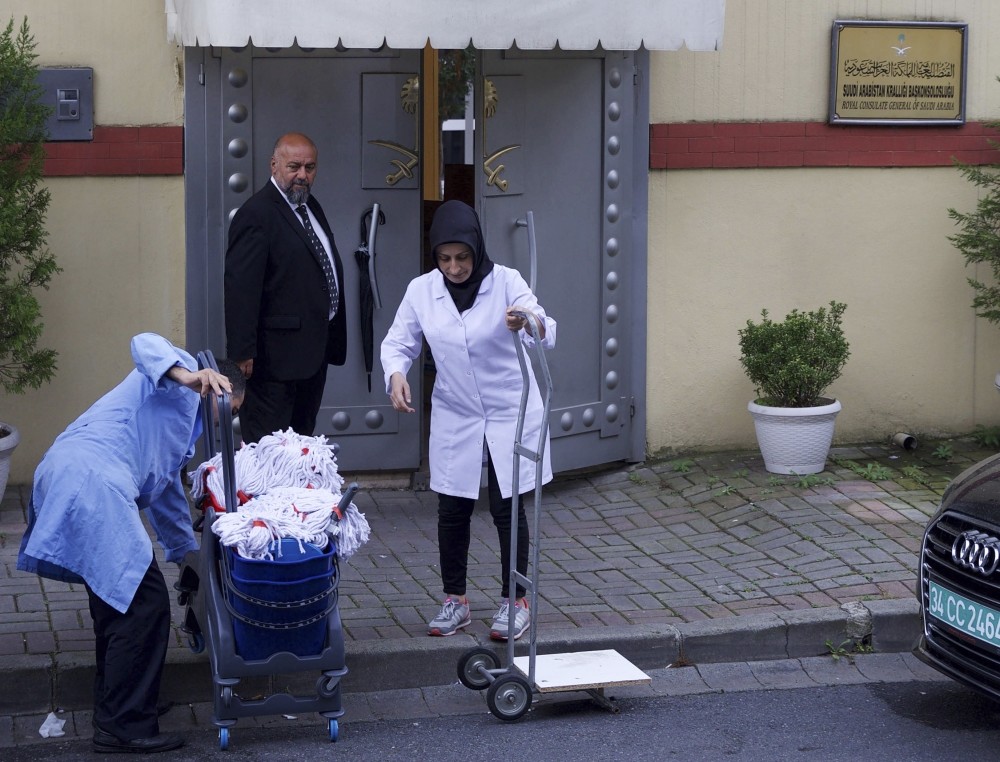 Cleaning personnel enter Saudi Arabia's Consulate in Istanbul hours before an inspection was supposed to be carried out.
by Daily Sabah Oct 16, 2018 12:00 am

In a major development concerning the case of missing journalist Jamal Khashoggi, Saudi Arabia's King Salman entered the fray, calling Turkish and U.S. presidents in an effort to control the crisis

Saudi Arabia's King Salman spoke to President Recep Tayyip Erdoğan late Sunday and U.S. President Donald Trump yesterday in an attempt to deescalate the crisis caused over the disappearance of Washington Post columnist Jamal Khashoggi. The disappearance, that some consider a murder investigation, was seen by many as the work of Saudi Crown Prince Mohammed bin Salman, the architect of the war in Yemen and the embargo on Qatar. The intervention of the king comes soon after some Saudi officials threatened retaliation against any country that took punitive measures against the kingdom.

Turkish and Saudi law enforcement officials started to conduct a joint inspection of the Saudi Consulate in Istanbul yesterday as Daily Sabah went to press, nearly two weeks after the disappearance of Khashoggi. The inspection came less than a day after Erdoğan spoke to King Salman on the phone.

Such a search would be an extraordinary development, as embassies and consulates under the Vienna Convention are technically foreign soil and must be protected by host nations. However, it remained unclear what evidence, if any, would remain after nearly two weeks since Khashoggi's disappearance. As if to drive the point home, a cleaning crew with mops, trash bags and cartons of milk walked in, past journalists waiting outside the consulate on Monday.

Local reports based on information provided by unidentified Turkish officials have painted a bleak picture of deceit and murder. It is feared that a Saudi hit team killed and dismembered Khashoggi, who wrote critically about Mohammed bin Salman. The kingdom has called such allegations "baseless" but has not offered any evidence Khashoggi ever left the consulate.

SAUDI KING THANKS PRESIDENT ERDOĞANA delegation of Saudi officials sent to Turkey to join their Turkish counterparts to find out what happened to Khashoggi spent hours at Istanbul Police Department Headquarters on Vatan Boulevard. A 10-car convoy arrived at the police headquarters at 1:30 p.m. and left two hours later.

Late Sunday, King Salman spoke on the telephone with President Erdoğan about Khashoggi. Turkey said Erdogan "stressed the forming of a joint working group to probe the case." Saudi Arabia, meanwhile, said King Salman thanked Erdogan "for welcoming the kingdom's proposal" for forming the working group. The king also said Turkey and Saudi Arabia enjoy close relations and "that no one will get to undermine the strength of this relationship," according to a statement on state-run Saudi Press Agency.

U.S. CONSIDERING PUNITIVE MEASURESTrump yesterday said he spoke with King Salman and was sending U.S. Secretary of State Mike Pompeo to meet with the king immediately. Trump also said King Salman denied "any knowledge of whatever may have happened" to Khashoggi and told him the Saudis are working closely with Turkey on the case. "The denial was very, very strong," Trump told reporters. "It sounded to me like maybe these could have been rogue killers. Who knows?"

Trump earlier had said Saudi Arabia could face "severe punishment" if it was proven it was involved in Khashoggi's disappearance. On Sunday, Saudi Arabia warned that if it "receives any action, it will respond with greater action." The Arabic-language daily Okaz wrote a headline yesterday in English warning: "Don't Test Our Patience." It showed a clenched fist made by a crowd of people in the Saudi flag's green color.

However, the White House brushed aside the Saudi threats, pledging a "swift, open, transparent investigation" into the journalist's disappearance. White House economic adviser Larry Kudlow declined to speculate on what Trump might do after the president promised "severe punishment" in a "60 Minutes" interview.

U.S. Senator Marco Rubio and Senator Jeff Flake, members of the Foreign Relations Committee, said Congress was prepared to move quickly and firmly if Trump failed to adequately respond to the Oct. 2 disappearance of Khashoggi. Rubio said U.S.-Saudi relations may need to be "completely revised" and stressed the U.S. would lose credibility on human rights if the Trump administration remained silent.