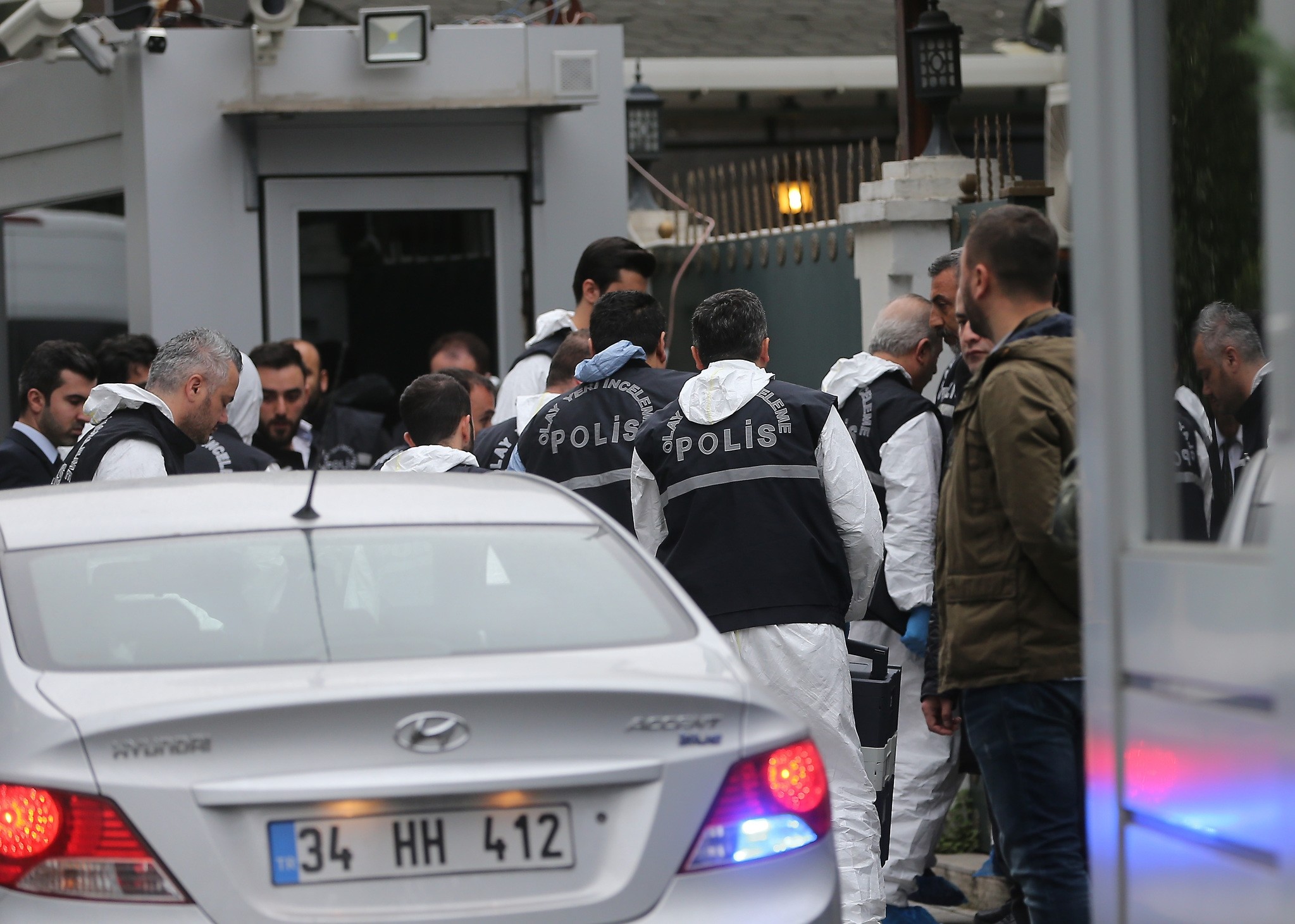 Turkish police and forensic experts arrived Wednesday afternoon at the Saudi consul general's residence in Istanbul to conduct a search as part of the investigation on journalist Jamal Khashoggi's disappearance.

The search had been expected since Tuesday, but Foreign Minister Mevlüt Çavuşoğlu told a news conference Wednesday that it had not yet been carried out because Saudi authorities said the consul's family was still in the residence.

"We expect the search in the residence and vehicles to be carried out today," he said following a meeting between President Recep Tayyip Erdoğan met with U.S. Secretary of State Mike Pompeo in Ankara.

Interior Minister Süleyman Soylu said earlier Wednesday that the search of the consul's residence could begin soon as soon as a "joint consensus" is reached with Saudi authorities.

"Once a joint consensus is reached, this step (to search the residence) will be taken," he added.

Soylu said that if permission to search the Saudi consulate in Istanbul were granted earlier, there would not be "any debates" regarding the incident.

"We have managed and are continuing to manage this issue transparently and open to the world within the measures given by law," he said.

Soylu also emphasized that the case was not only a global matter but also a test for the Turkish judiciary.

An unidentified Turkish official told The Associated Press on Tuesday that the forensic experts who inspected the Saudi Arabian consulate in Istanbul had found certain evidence that pointed to Saudi writer Jamal Khashoggi's murder there. The AP said the high-level official had provided no further details. The report came an hour before Saudi Arabia's consul-general to Istanbul Mohammad al-Otaibi left Turkey on a commercial flight and his residence was searched by the police. Meanwhile, CNN and The New York Times reported Saudi Arabia was preparing to acknowledge that Jamal Khashoggi's death was the result of a botched interrogation, after denying any role in his disappearance for two weeks.

Khashoggi disappeared two weeks ago during a visit to Saudi Arabia's Consulate in Istanbul. Turkish officials fear a 15-member Saudi assassination squad killed Khashoggi at the consulate. Late Monday, Turkish forensic experts, together with Saudi officials, conducted a detailed nine-hour search of the consulate's premises. Permission for the search apparently came after a late-night phone call on Sunday between President Recep Tayyip Erdoğan and King Salman. The Turkish inspection team included a prosecutor, a deputy prosecutor, anti-terror police and forensic experts. Certain areas of the consulate were to remain off-limits, although officials were able to inspect surveillance cameras, Turkish media reported.

Erdoğan said, "My hope is that we can reach conclusions that will give us a reasonable opinion as soon as possible because the investigation is looking into many things such as toxic materials and materials being removed by painting them over."

Turkish officials told the media that authorities have an audio recording indicating that Khashoggi was killed in the consulate and have shared evidence with countries including Saudi Arabia and the United States.

As part of the international efforts to get to the bottom of the case, U.S. Secretary of State Mike Pompeo was sent by President Donald Trump to Saudi Arabia. Pompeo met with King Salman and Crown Prince Mohammed bin Salman in Riyadh on Tuesday.

At a news conference yesterday, Foreign Minister Mevlüt Çavuşoğlu said Pompeo would bring more information on the issue when he arrives in Turkey after a visit to Saudi Arabia. Çavuşoğlu said that Turkey has "not received a confession" from Saudi authorities, adding that a new series of searches will cover the residence of the Saudi consul and some vehicles. Turkish television channels previously shared footage of a large vehicle leaving the consulate two hours after Khashoggi vanished and parking at the consul's residence.

CNN reported yesterday that the Saudis were going to admit the killing happened but deny the king or crown prince had ordered it - which does not match what analysts and experts know about the kingdom's inner workings.

Speaking to The Associated Press, "The effort behind the scenes is focused on avoiding a diplomatic crisis between the two countries and has succeeded in finding a pathway to deescalate tensions," said Ayham Kamel, the head of Eurasia Group's Mideast and North African practice. "Riyadh will have to provide some explanation of the journalist's disappearance, but in a manner that distances the leadership from any claim that a decision was made at senior levels to assassinate the prominent journalist."

The New York Times reported that the Saudi royal court would suggest that an official within the kingdom's intelligence services - a friend of the crowned prince - had carried out the killing. According to that reported claim, the crown prince had approved an interrogation or rendition of Khashoggi back to Saudi Arabia, but the intelligence official was tragically incompetent as he eagerly sought to prove himself. Both reports cited anonymous people said to be familiar with the Saudi plans.

UN CALLS FOR LIFTING OF IMMUNITY

U.N. High Commissioner for Human Rights Michelle Bachelet yesterday called on Saudi Arabia to waive immunity on its diplomatic premises and officials. In a statement, Bachelet welcomed the investigators being given access to the consulate, despite a two-week delay, and called on authorities of both countries to ensure that "no further obstacles are placed in the way of a prompt, thorough, effective, impartial and transparent investigation."

"Given there seems to be clear evidence that Mr. Khashoggi entered the consulate and has never been seen since, the onus is on the Saudi authorities to reveal what happened to him from that point onward," she said. It was important to immediately lift immunity for any premises and officials bestowed by the Vienna Convention on Consular Relations, she added.

"Under international law, both a forced disappearance and an extra-judicial killing are very serious crimes, and immunity should not be used to impede investigations into what happened and who is responsible," Bachelet said.

Her spokesman Rupert Colville said, "We hope the lifting of immunity is absolute, so they can investigate, in the consulate, the [consular] residence premise, the vehicles shown in the security camera footage."