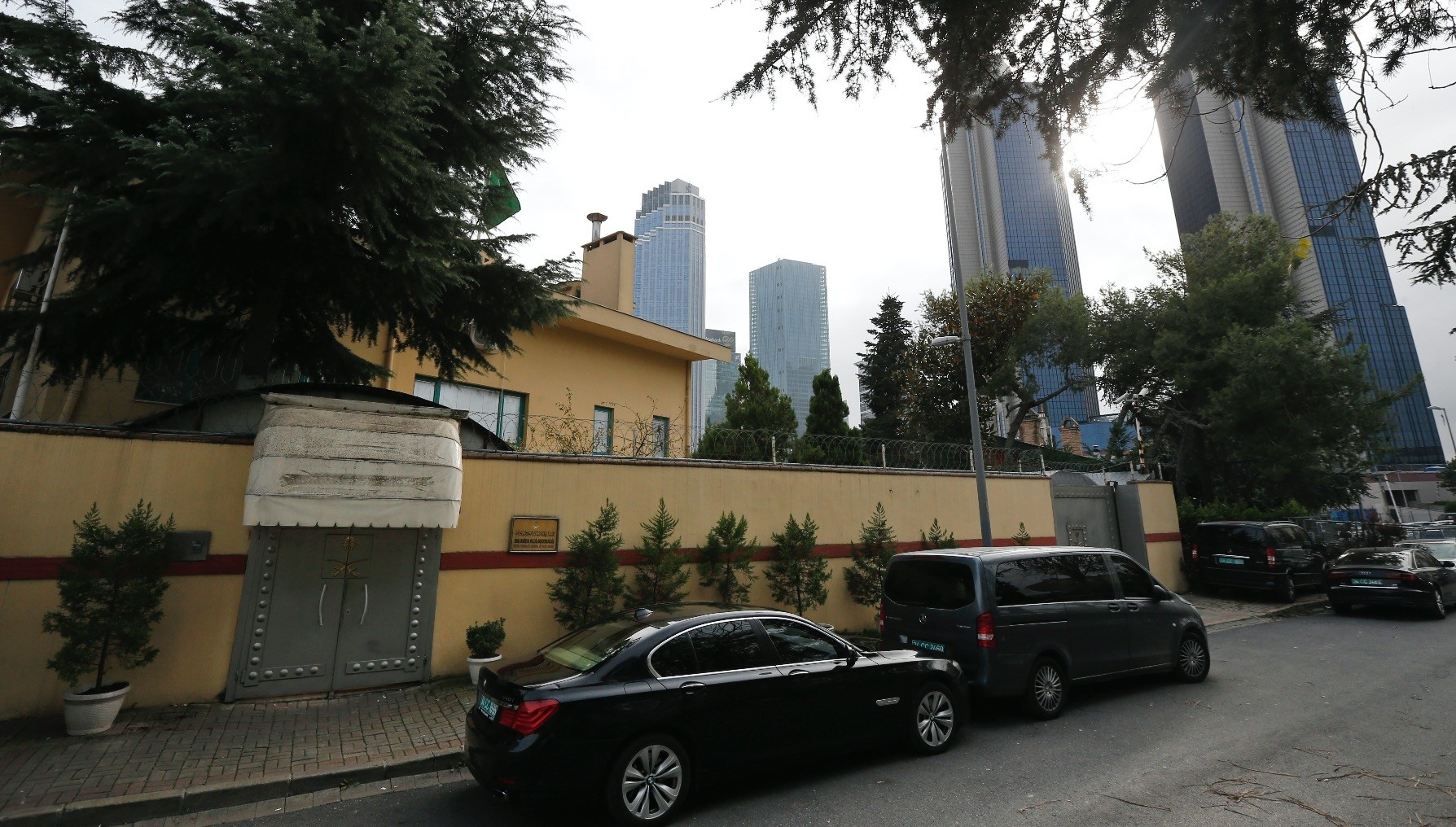 A view of the Saudi consulate in Istanbul. The building remains at the heart of disappearance of Khashoggi, who was last seen entering the consulate.
by Daily Sabah with Wires
Oct 20, 2018 12:00 am

As Turkey pledges to share the results of its probe into the disappearance and possible murder of Saudi journalist Jamal Khashoggi in his country's consulate in Istanbul, the U.S. and U.K. are mulling over what their responses will be in the likely case that Saudi Arabia's involvement is proven

Friday marked the 17th day in the disappearance of Saudi journalist Jamal Khashoggi, and Turkish authorities have pledged to share the results of their investigation into the case. On the other hand, Turkish officials have denied sharing an audio recording of the alleged moments Khashoggi was murdered in the Saudi Consulate in Istanbul by Saudi suspects. Saudi Arabia's partners, meanwhile, are considering their responses to the case with U.S. President Donald Trump promising there would be "consequences" if Khashoggi was murdered by the Saudis at the consulate as it has been claimed. The United Kingdom, similarly, is pondering what their response will be. Khashoggi, a prominent critic of the Saudi regime, was last seen entering the consulate in Istanbul's Levent district on Oct. 2. Riyadh flatly denies reports that a Saudi "hit squad" murdered the 59-year-old at the consulate although evidence has been mounting against them. Turkish police are continuing their probe into the case and after searching and examining the consulate for Khashoggi's remains, they expanded their search to a nearby forest, media outlets reported. Foreign Minister Mevlüt Çavuşoğlu said Turkey would share their findings with the world "once the results became clear."

"The whole world is curious about what happened to Khashoggi. We have information and evidence of what happened to him, how it happened and who is responsible. We are waiting for the results of the investigation being carried out by the Istanbul Chief Public Prosecutor's Office. Although it was late, a search and forensic examination was carried out at the consulate, the consul general's residence and on consular vehicles. Investigators are waiting for the results of lab analysis of findings," Çavuşoğlu told reporters on Friday. The minister also denied reports that visiting U.S. Secretary of State Mike Pompeo heard an audio recording of the moments that Khashoggi was murdered at the consulate.

The U.S., Saudi Arabia's main ally, has so far been cautious on commenting about the disappearance of the Washington Post columnist for the sake of good relations with Riyadh, which were significantly improved under the Donald Trump administration. U.S. President Donald Trump on Thursday admitted that "it certainly looks that way" when asked by reporters if Khashoggi was dead, adding that it was "very sad." In response to a question of the consequences the Saudi regime would face if they are found to be complicit in Khashoggi's murder, Trump responded: "It will have to be severe. It's bad, bad stuff but we'll see what happens."

British Foreign Secretary Jeremy Hunt also promised a response to the case. "Part of our reaction will depend on the Saudi reaction, and whether we sense that they are taking it as seriously as we are taking it. But this is a very, very serious matter," Hunt told BBC radio on Friday.

"Our relationship with Saudi is a strategic relationship as well. Our response will be considered... In the end, if these stories are true, we have to be absolutely clear, it would not be consistent with our values," he added.

Khashoggi, once close to the royal family, left for the United States for a self-imposed exile after he raised criticism of Riyadh's policies on a number of issues. He was critical of arbitrary detentions in his home country and is believed to have angered Saudi Arabia's Crown Prince Mohammed bin Salman (widely known as MBS). Citing U.S. intelligence intercepts, the Washington Post claimed MBS ordered an operation targeting Khashoggi.

The Saudi journalist was at the consulate for paperwork required for his upcoming marriage to his Turkish fiancee, Hatice Cengiz. Cengiz was the last acquaintance to see him alive and alerted authorities when Khashoggi did not emerge from the consulate long after the building was closed. Investigators on Friday heard the testimonies of the Turkish staff working at the consulate. The staff was reportedly told to leave the office early by Saudi officials on the day of Khashoggi's disappearance. Media outlets reported that the consul general's driver was among 15 members of the consulate staff who gave testimonies at the Istanbul Chief Public Prosecutor's Office. The staff comprised of accountants, secretaries and technical maintenance workers. Earlier last week, law enforcement authorities expanded their search for Khashoggi to Belgrade Forest in Istanbul, the closest forest to the consulate, and to the province of Yalova across the Marmara Sea, making it clear that their efforts are no longer to locate the journalist but rather his remains. Video footage collected by police from around the Saudi Consulate has shown that of the 26 vehicles that exited the compound on the day Khashoggi went missing, most came back, apart from the two that were carrying the members of the 15-person "assassination squad." Investigations have shown that one vehicle went to Belgrade Forest located in the northern edge of the European side of the Bosporus Strait, and to Yalova province.

Turkish reports say Khashoggi was brutally murdered and dismembered inside the consulate by members of an "assassination squad" with ties to MBS. Daily Sabah's sister newspaper, Sabah, which was first to publish surveillance camera images of the squad at Istanbul's Atatürk International Airport, hotels and the consulate, released new images of the team on Friday and said in a report that members of the team that included royal guards and a forensics expert had been to Turkey many times before the disappearance of Khashoggi. New images show two members of the group, one wearing a cap and another wearing a traditional Saudi dress, at the Atatürk International Airport on Oct. 1, while another surveillance camera image shows three members walking in the airport at 1:52 a.m. on Oct. 2. Another report by Sabah newspaper last Thursday showed that a member of MBS' entourage, seen during several of the crown prince's trips abroad, had walked into the Saudi Consulate just before Khashoggi's disappearance. The man identified as Maher Abdulaziz Mutreb is described as leader of the "hit squad." Surveillance camera footage shows Mutreb accompanied by several people as he enters the consulate and he is seen in another image outside the nearby residence of the consul general. Other images show him at his hotel with a large suitcase and later, at Atatürk International Airport.