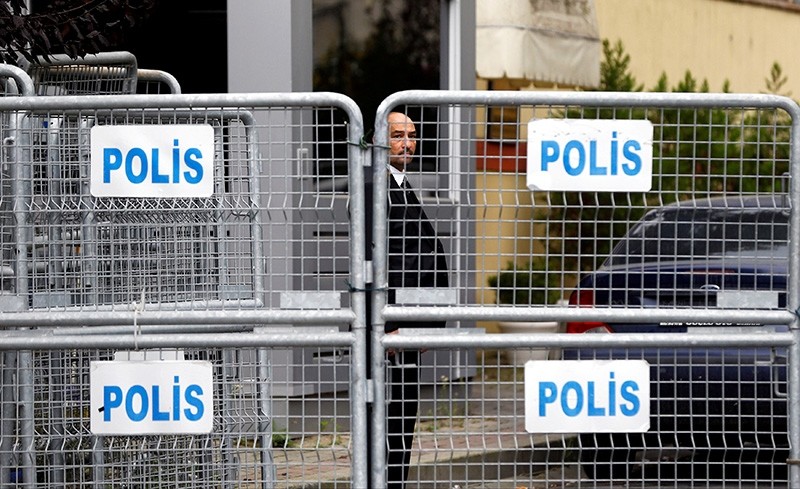 As the investigation into the death of Jamal Khashoggi continues, Turkish police on Monday found a car belonging to the Saudi consulate and bearing diplomatic plates in a private parking lot in Istanbul's Sultangazi district, where it had been parked for several days after the journalist's disappearance.

Police asked for the permission of the chief public prosecutor's office and the Consulate General of Saudi Arabia to search the vehicle, according to security sources.

BREAKING — Turkish police finds a car belonging to the Saudi consulate and bearing diplomatic plates in a private parking lot in Istanbul's Sultangazi district, where it had been parked for several days after Jamal Khashoggi's disappearancehttps://t.co/pGTt6Z1LzI pic.twitter.com/TMimeFvSxP

Examining the CCTV footage from the parking lot, the police found out that another diplomatic vehicle arrived in the parking lot on Oct. 18, stayed for a while and left. This vehicle is also being probed by police units.

A car without license plates was also towed out of the parking lot of the consulate compound on mid-Monday.

Meanwhile, five Turkish employees of the Saudi consulate in Istanbul gave statements as witnesses under the investigation, a judicial source said Monday.

The employees said in their testimonies that they weren't given a day off on Oct. 2 and left the consulate when their shift ended at 3:30 p.m. local time (1230GMT).

Among those who testified to the prosecutors assigned by the terror and organized crimes unit of Istanbul's Chief Public Prosecutor's Office, a consulate staff -- employed as a driver -- spoke to the reporters after his testimony at Istanbul Court House in Çağlayan district.

The employee said the prosecutors asked them whether anything unusual happened on Oct. 2 in the consulate, whether they had seen Khashoggi and the 15 other Saudis, how long they have been employed at the consulate and the working hours of the staff.

The driver said they did not sense an extraordinary situation on the day when Khashoggi entered the consulate and he had not been sent anywhere outside of the consulate. The working hours that day began at 9 a.m. (0600GMT) and ended 3:30 p.m. (1230GMT) local time, he said.

The driver added that the employees left the building as usual when their shift ended on Oct. 2.

The remaining 17 personnel -- both Turkish and foreign nationals -- are expected to appear at the courthouse to submit their testimony as part of the probe by Istanbul Chief Public Prosecutor's Office, the sources added.

Last week, a total of 23 consulate employees also spoke to the prosecutors.

Khashoggi went missing on Oct. 2 when he entered the consulate in Istanbul. After weeks of denying knowledge of his fate, Saudi officials said Saturday the prominent journalist was killed in a "rogue operation."

President Recep Tayyip Erdoğan said Sunday he would reveal the "truth" about the Khashoggi case on Tuesday while Turkish officials vowed to pursue the case after Saudi Arabia's admission of guilt.

Comments from Saudi Foreign Minister Adel al-Jubeir on Sunday were some of the most direct yet from Riyadh, which has given multiple and conflicting accounts about Khashoggi's killing on Oct. 2, first denying his death and later admitting it amid an international outcry.

Jubeir called Khashoggi's killing a "huge and grave mistake," but sought to shield its powerful crown prince from the widening crisis, saying Mohammed bin Salman had not been aware.

After two weeks denying any involvement in the 59-year-old's disappearance, Saudi Arabia on Saturday said Khashoggi, a critic of the crown prince, died during a fight in the building. An hour later, another Saudi official attributed the death to a chokehold.

"Nothing can justify this killing and we condemn it in the strongest possible terms," Germany, Britain and France said in their joint statement.

A joint Turkish-Saudi team completed an investigation into the case on Thursday after searching the residence of the consul general as well as the Saudi consulate in Istanbul.