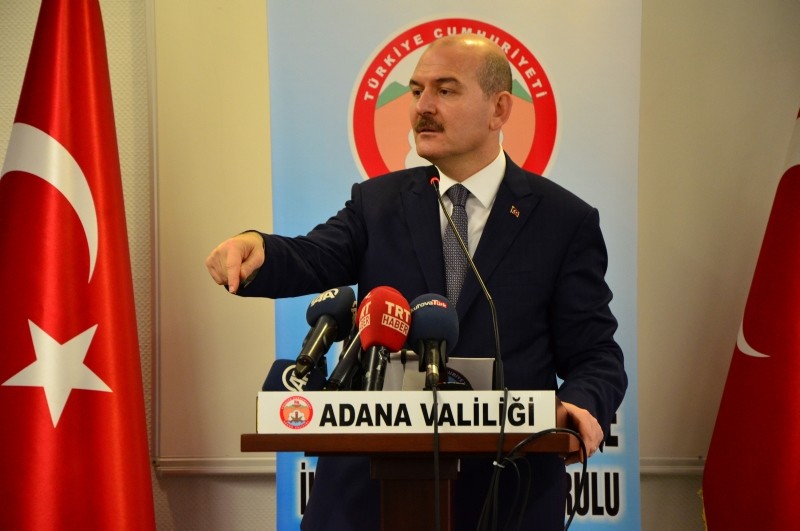 Interior Minister Süleyman Soylu said that the PKK terrorist group, which is blamed for a terrorist campaign all across Turkey and recognized as a terrorist organization by the EU, controls 80 percent of the drug trade in Europe

The Turkish interior minister on Thursday said the PKK terrorist group controls 80 percent of the drug trade in Europe, earning around $1.5 billion per year.

"Especially in Europe, the PKK controls 80 percent of the drug trade and it is estimated that the terror group earns around $1.5 billion per year," Soylu said.

The PKK is listed as a terrorist organization by Turkey, the U.S. and the EU. In its more than 30-year terror campaign against Turkey, the group has been responsible for the deaths of some 40,000 people, including women and children.

A Turkish police report released on Sept. 26 said that the PKK is active in all phases of drug-trafficking, including production, delivery, distribution and sales. The terror group reportedly produces heroin in laboratories in its camps in northern Iraq and sells it to Europe. In its production process, the PKK terrorist organization forces civilians to produce cannabis roots in eastern and southeastern provinces of Turkey and uses that money to fund terror activities.

Though its numbers have dwindled, the PKK survives through its drug revenues and have lately enjoyed free rein in northern Syria with military support from the U.S. to its Syrian branch.

Soylu said that the number of type of drugs included in the European Union's early warning system is 670, of which 70 percent have been listed in the past five years.

"In other words, [drug dealers] are continosuly inventing new drugs. The production of drugs is also increasing. The area of opium cultivation in Afghanistan was 17,000 hectares in 2002. The U.S. intervened there to bring peace and democracy; it was such an intervention that the cultivation area jumped to 328,000 hectares in 2017. Opium production increased from 4,800 tons in 2016 to 9,000 tons in 2017, an increase of 63 percent in a year."

He added that distribution channels for drugs is also developing alongside chemistry and production. "Especially the effectiveness of the 'dark web' is increasing. Out of all sales over the dark web using crypto currencies, two-thirds are related to drugs."

On domestic anti-drug operations, Soylu said the number of operations increased 29 percent in the first ten months of 2018 compared to the same period last year. He added that measures against drug dealers have been increased, especially near schools. "In all 19,466 drug-related arrests we carried out this year 16,603 were street dealers," he added.

Moreover, in 2017, 70 operations were conducted against drug traffickers and 10 operations have been carried out in 2018 so far, Soylu added.

The quantity of heroin captured in the first 10 months of this year increased 32.5 percent compared to the same period last year, Soylu said, adding that this increase was 40 percent for cocaine, 59 percent for ecstasy and 132 percent for synthetic drug pills. "If I tell you that we have captured 15,821,096 captagon pills from street dealers in the first 10 months, we can make a clear picture in the minds of the public regarding the scale of our fight on the field," Soylu added.

The minister said that there were 941 drug related deaths in Turkey in 2017 and 920 deaths in 2016, but this number fell to 228 in the first nine months of this year. He said that the ministry predicts the year-end number will be around 500-550.

Soylu noted that the ministry has detected 60,503 abandoned buildings throughout Turkey, which are used as primary distribution locations or consumption sites for drugs. He called on mayors, governors and district governors for the rapid destruction or the rehabilitation of these structures.

Since 2014, when the country implemented a comprehensive action plan to escalate the war on drugs, Turkey has been fighting on multiple counternarcotics fronts. It looks to help addicts through better rehabilitation and awareness campaign. It also targets smugglers and small-time dealers with more operations carried out by newly-formed "narco teams" that especially focus on operations around schools and other places where young people, the most vulnerable targets for drug peddlers, go.