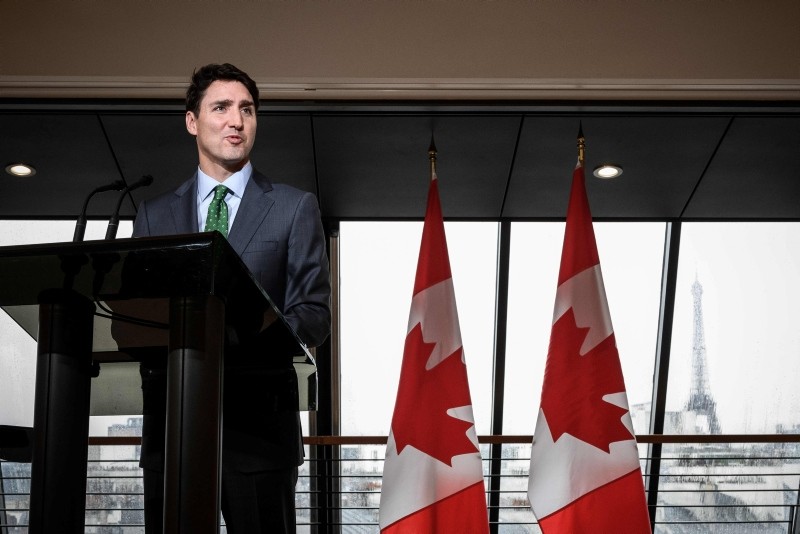 Canadian Prime Minister Justin Trudeau speaks during a press conference at the Canadian Embassy in Paris on November 12, 2018. (AFP Photo)
by Daily Sabah with Agencies Nov 12, 2018 12:00 am

Canada and Germany confirmed Monday that Turkey briefed their intelligence services on the recordings of the killing of dissident Saudi journalist Jamal Khashoggi, who has been missing since Oct. 2 after entering Saudi Arabia's Consulate in Istanbul.

Canadian Prime Minister Justin Trudeau acknowledged that his country's intelligence agencies have listened to recordings of the murder. Trudeau, speaking in Paris on Monday, said, "Canada has been fully briefed on what Turkey had to share."

Trudeau said he thanked President Recep Tayyip Erdoğan for "his strength in responding to the Khashoggi situation" on the sidelines of the World War I centenary ceremonies this weekend. Trudeau, however, did not give details of what was on the recording. He added that he personally had not heard the recording.

"Canada's intelligence agencies have been working very closely on this issue with Turkish intelligence," said Trudeau.

"We continue to be engaged with our allies on the investigation into accountability for the murder of Jamal Khashoggi and we are in discussions with our like-minded allies as to the next steps with regard Saudi Arabia," he added.

Germany has also confirmed that the recordings of the killing of Khashoggi have been received by the country's authorities.

Asked about recent media reports over the weekend, German Chancellor Angela Merkel's spokesman confirmed that they have received information from Turkey.

"I can tell you that there has been an exchange of intelligence service information on that," Steffen Seibert told a regular news conference but declined to give any further details.

On Saturday, Erdoğan said he had given the "tapes" to some countries.

Khashoggi, a columnist for The Washington Post and a critique of Saudi crown prince Mohammed bin Salman, also known as MBS, was reported missing by his fiancee Hatice Cengiz after entering the Saudi Consulate in Istanbul to obtain marriage documents on Oct. 2.

Erdoğan added that Saudi Arabia knows that the killer is among a group of 15 people who arrived in Turkey a day ahead of the Oct. 2 killing.

In late October, Riyadh arrested 18 people over their suspected involvement in an alleged brawl inside the consulate, while Turkey announced its readiness to try the Saudi suspects in the Khashoggi murder in Istanbul if Saudi Arabia does not want to prosecute them.

Later in October, the Istanbul Chief Public Prosecutor's Office announced that Khashoggi was strangled to death as soon as he entered the consulate and his body was then dismembered and disposed of in accordance with plans drawn up earlier.

Khashoggi: "I am suffocating"

Meanwhile, speaking to Al-Jazeera on Sunday, Nazif Karaman, a journalist from the Turkish language daily Sabah, said that Khashoggi's last words were "I'm suffocating ... Take this bag off my head, I'm claustrophobic," according to the audio recording, implying that he was suffocated to death while a bag covered his head.

According to Karaman, the murder took about seven minutes and the Saudi entourage covered the floor with plastic bags before dismembering Khashoggi's body – a 15-minute process that was led by Salah al-Tubaigy, head of the Saudi Scientific Council of Forensics.

Riyadh urged to cooperate with Turkey

While Ankara continues its investigation on the matter, Riyadh is still mostly abstaining on the case, causing the international community to urge the country to cooperate with Turkey.

Speaking ahead of his visit to Saudi Arabia and the United Arab Emirates, British Foreign Secretary Jeremy Hunt urged Saudi officials yesterday for full cooperation with Turkey to reveal what had happened to Khashoggi.

"We encourage Saudi authorities to cooperate fully with the Turkish investigation into his death, so that we deliver justice for his family and the watching world," he said.

It is "unacceptable" that the full circumstances behind Khashoggi's murder still remain unclear, Hunt added.

Hunt is the first U.K. minister to visit Saudi Arabia since the murder of the Saudi journalist one month ago, a Foreign Office statement said.

"He [Hunt] will use his meetings to make clear the importance of Saudi Arabia cooperating with Turkey to conduct a full and credible investigation into Mr. Khashoggi's death," it said.

"The international community remains united in horror and outrage at the brutal murder of Jamal Khashoggi one month ago," Hunt said.

After arriving in Riyadh, Hunt met with Saudi King Salman, according to the official SPA news agency. They discussed boosting bilateral cooperation and regional development, SPA said, without giving any further details.

Saudi Arabia initially denied any involvement in Khashoggi's disappearance, but a Saudi official eventually attributed his death to a botched attempt to return him to the kingdom. Later, Riyadh said the killing was premeditated and the crown prince has vowed that the killers will be brought to justice.

U.S. Secretary of State Mike Pompeo also pledged Sunday to hold those responsible for the murder of Khashoggi accountable.

"The secretary emphasized that the U.S. will hold all of those involved in the killing of Jamal Khashoggi accountable and that Saudi Arabia must do the same," said Nauert.

Meanwhile, according to a New York Times article, Saudi Arabia was also discussing killing its other enemies, particularly Iranians, including Qassim Suleimani, the leader of the Quds Force of Iran's Revolutionary Guard, even before Khashoggi's death.

"Saudi officials have portrayed Mr. Khashoggi's death as a rogue killing ordered by an official who has since been fired. But that official, Maj. Gen. Ahmed al-Assiri, was present for a meeting in March 2017 in Riyadh, the Saudi capital, where the businessmen pitched a $2 billion plan to use private intelligence operatives to try to sabotage the Iranian economy," the article said.

Assiri was previously the spokesman for the Saudi-led coalition in Yemen and had been promoted to a high ranking adviser last year. He is also known as a close associate of MBS.

MBS, the de facto ruler of Saudi Arabia, has been seen by many in the West as a reformer who has brought massive social change and progressive reform to the kingdom. However, his image has been tainted in recent weeks because of the global outcry over the missing journalist.