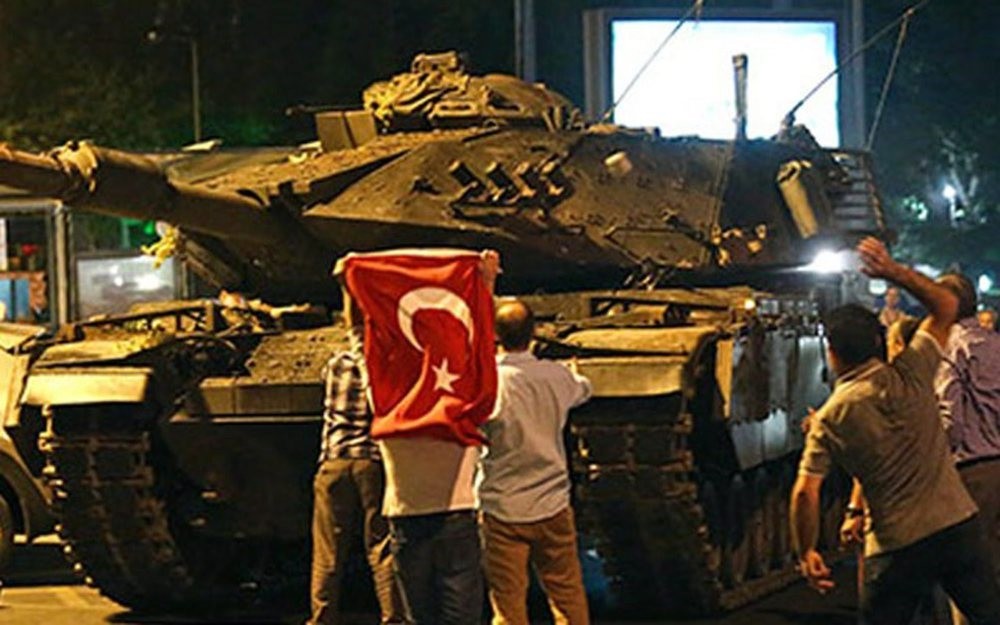 A prosecutor yesterday asked for thousands of years in prison for 10 military officers involved in the Istanbul leg of the 2016 coup attempt carried out by the terrorist group FETÖ. Suspects are accused of killing eight people while taking over neighborhoods on Istanbul's Asian side amid public resistance

Another trial on the July 15, 2016 coup attempt in Istanbul nears the end as a prosecutor in "Çengelköy and Kuleli" case presented his final statement for 114 defendants yesterday. The prosecutor asked for jail terms adding up to more than 5,000 years for 10 defendants who were charged with their involvement in the failed coup and killing eight people, mostly those who confronted the putschists to convince them to end the attempt.

The case involves incidents that unfolded in the neighborhood of Çengelköy, the Beykoz and Vaniköy districts and at Kuleli military school on Istanbul's Asian side during the coup attempt blamed on military infiltrators of the Gülenist Terror Group (FETÖ).

Mürsel Çıkrıkçı and Muammer Aygar, two colonels who commanded troops attacking civilians opposing the coup and invaded a police station in Çengelköy, face the highest prison sentences. They are also accused of forcing cadets and conscripts at Kuleli military school to join the coup attempt. Defendants also include 14 police officers accused of aiding the putschists.

Prosecutor Caner Babaloğlu asked for aggravated life imprisonment for 50 defendants including Aygar, Çıkrıkçı and members of riot police for an "attempt to overthrow the constitutional order." Thirty-six defendants face prison terms up to 15 years for "membership of a terrorist group" in reference to FETÖ. The prosecutor asked for eight military officers to be sentenced with seven instances of aggravated life imprisonment for their involvement in the killings of Mustafa Cambaz, Kader Sivri, Gökhan Esen, Halil Kantarcı, Burak Cantürk, Osman Yılmaz and Fatih Dalgıç. The victims were on the street to confront the putschists after the country's leaders called on the public to "reclaim democracy" in the face of the coup attempt.

Muammer Aygar faces the longest prison sentence, up to 5,190 years, for his role in the incident, while Çıkrıkçı and eight others face prison sentences of up to 3,360 years. Six other defendants will also be punished with prison sentences that would add up to the more than 4,000 years if convicted by the court. Lesser sentences are being asked for defendants for other crimes involving property damage and limiting the freedom of individuals.

Prosecutor asked the court to acquit 64 defendants including 57 conscripts and seven cadets, citing that they had "no ability or capacity to prevent the incidents" and were forced by their superiors to join the coup attempt. The final statement also says none of the 64 defendants fired their guns that night.

Çengelköy was one of the iconic sites of resistance against the coup attempt and was one of the first places putschists invaded. Neighborhood residents were mobilized against the putschist soldiers who were planning to head to a major bridge connecting Istanbul's two sides if they succeeded. Some victims were caught in crossfire, while others like Mustafa Cambaz and Halil Kantarcı were killed while trying to stop the soldiers. Cambaz, a journalist for Yeni Şafak daily and a resident of Çengelköy, was among a group of civilians who tried to protect the neighborhood's police station from the putschists' invasion. He was killed by two bullets that hit him in the chest. Halil Kantarcı, who was imprisoned when he was 15 years old in another coup about two decades ago, also joined a group who confronted soldiers leaving Kuleli military school when he was shot to death.

The coup attempt killed 251 people in total across Turkey and injured thousands of others. Casualties include police officers and military officers opposing the coup attempt and civilians. The attempt came one month before a planned purge of suspected FETÖ infiltrators in the military and was the bloodiest attempt to overthrow the government by the terrorist group, which used its infiltrators in police and judiciary in 2013 in an attempt to seize power in two coup bids.

Since the coup attempt was quelled, thousands of people have been detained or arrested for FETÖ links and actively participating in the coup attempt. Coup trials that started in late 2016 are still underway. A total of 2,724 defendants were handed prison sentences in 220 concluded trials, and 1,809 of them were sentenced to life. A total of 831 among them received aggravated life imprisonment, which means they will not be eligible for parole. Most of the remaining 69 trials are expected to be concluded by the end of this year.