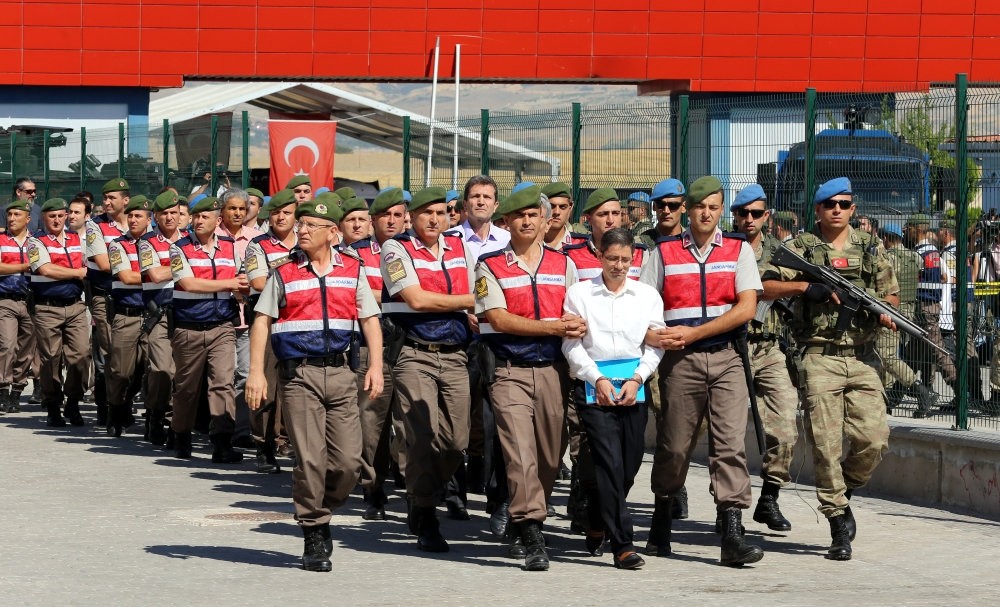 Kemal Batmaz is being brought to a courthouse in Ankara for his trial on coup charges. He was in charge of FETu00d6 infiltrators in the army's Air Forces and coordinated the coup attempt in 2016.
by Daily Sabah Nov 17, 2018 12:00 am

Eighty-six people, including military officers and civilians, were detained in a new wave of nationwide operations against FETÖ on Friday. The suspects are linked to Kemal Batmaz, a key figure of the group and one of the names behind the 2016 coup attempt, including one of the perpetrators of a recent attack at the U.S. Embassy in Ankara

The Chief Public Prosecutor's Office in Ankara issued arrest warrants for 188 suspects and 86 were detained as of Friday, in the latest wave of nationwide operations against the Gülenist Terror Group (FETÖ). Suspects include 100 members of the Turkish Air Force and 88 civilians. All are affiliated with Kemal Batmaz, a senior figure of the terrorist group who was captured at a military base in Ankara during the July 15, 2016 coup attempt. Batmaz is accused of being the "Air Forces imam" or chief FETÖ handler responsible for infiltrators of the terrorist group in the military. Ersin Bayram, one of the suspects implicated in the investigation that led to Friday's operations, has already been jailed in an investigation into an attack on the U.S. Embassy in Ankara in August.

Military officers among the suspects were retired or dismissed from the army, media reports say. Suspects were identified through their contacts with civilian FETÖ members via pay phones, a method that the terrorist group frequently used to avoid detection. Security forces raided several locations in 25 cities to capture the suspects. Thirteen among the civilian suspects were currently serving at public agencies, security officials said.

FETÖ is accused of using its military infiltrators to carry out the 2016 coup attempt that killed 251 people. Suspects detained on Friday were loyal to Adil Öksüz, the fugitive mastermind of the attempt until 2014, but he "transferred" the duty of control of infiltrators to Batmaz that year, investigators say. Öksüz rose to rank of chief "imam" or handler responsible for all military infiltrators in 2014.

Batmaz and Adil Öksüz were caught by CCTV cameras at the 143rd Fleet of the Akıncı Air Base, the command center of the putschist soldiers, on the night of July 15. Öksüz managed to flee after a controversial court ruling ordered his release, while Batmaz was jailed. Batmaz, a former executive of Kaynak Kağıt, a paper company that operated one of the largest business conglomerates affiliated with the terrorist group, told a court trying him and dozens of others last August he was near Akıncı to see a plot of land he planned to purchase in the company of Harun Biniş, another employee of a FETÖ-linked company. His excuse for being near the base was the same as Öksüz who claimed he went to an area near the base for a plot of land he planned to purchase when he was captured. Batmaz had also flatly denied that he was in the security camera footage despite multiple expert witnesses and high-definition footage taken from security cameras showing it was clearly him walking freely in the aisles of the military base. At one point in the footage, Batmaz even nods when a putschist general gives him a military salute.

FETÖ is accused of conspiring against the state, wiretapping thousands of people including government officials and encrypting phones. The organization has been labeled a threat against the country's national security.

Tens of thousands of people were detained or arrested after the coup attempt was quelled, operations still continue two years after the attempt to capture FETÖ members in the military. Ten large-scale operations were carried out against the Air Force members this year and 483 officers were arrested. Some suspects confessed their ties to the group and informed investigators on secret communication methods of FETÖ that eventually led to more operations. Police also carry out operations against other branches of military that the members of the group infiltrated. Arrest warrants were issued on Friday for 44 suspects, including 38 serving soldiers in operations against infiltrators in the Land Forces of the Turkish Army.