DHKP-C leaders believed to be in Europe, face arrest warrants 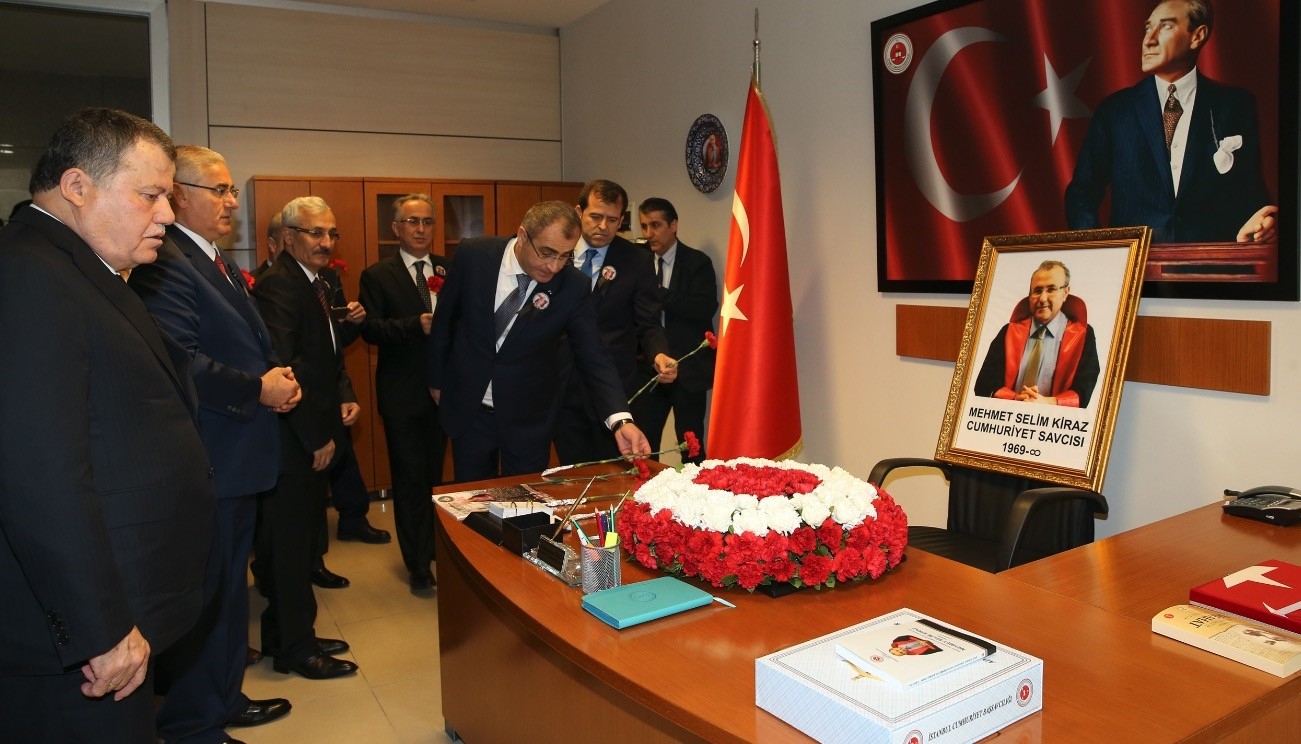 An Istanbul court Thursday ordered international arrest warrants for the senior figures of the terrorist group DHKP-C who are believed to be in European countries, in a trial over the 2015 murder of a prosecutor in an Istanbul courthouse by the group's militants

The trial concerning the shocking murder of prosecutor Mehmet Selim Kiraz in his office inside a well-protected courthouse complex in Istanbul three years ago, opened Thursday in the city. In the first hearing, the court ordered arrest warrants for nine fugitive defendants, all senior figures in the Revolutionary People's Liberation Party-Front (DHKP-C) terrorist group. The whereabouts of some defendants are unknown, but one was captured in Greece earlier, and two others are believed to be in Germany and The Netherlands.

Kiraz was taken hostage by Şafak Yayla and Bahtiyar Doğruyol, two DHKP-C militants, in his office in the Çağlayan courthouse complex, on March 31, 2015. Before the police stormed the office, the terrorists killed Kiraz. They were killed in an ensuing shootout with police. Kiraz was a prosecutor in the case of police officers accused of killing Berkin Elvan, a protester who took part in the 2013 Gezi Park riots in Istanbul. After his death, Elvan became a symbol for the DHKP-C, which is recognized as a terrorist group by Turkey, the United States and the European Union.

Fourteen defendants accused of masterminding the attack and aiding and abetting two militants are being tried in the case. Four were jailed while nine others remain at large. Those nine suspects include senior leaders of the terrorist group and most are believed to be in Europe. Although they recognize DHKP-C as a terrorist group, European Union countries are often reluctant to extradite any member of the group to Turkey as the group disguises itself as a far-left movement facing "political persecution" in Turkey.

Faruk Ereren, a member of DHKP-C's ruling "committee," was released in Germany where he was detained years ago and is believed to be in Greece. Zerrin Sarı, known as "big sister" and former wife of the group's late founder Dursun Karataş, is also believed to be in a European country. She was arrested in Belgium in 1999 but was released in 2008. She is among DHKP-C figures also wanted by the United States. Hüseyin Fevzi Tekin was arrested in Greece in 2014 but a Greek court rejected his extradition to Turkey. Tekin is a high-ranking official in the DHKP-C who rose to the top after the death of its leader Dursun Karataş in 2008. He was arrested after a series of bombings were carried out in Istanbul's Fatih district in 1999. After his release on parole, he disappeared. He is accused of commanding the organization from Greece. Greece has long been a favorite hideaway for terrorists from the DHKP-C and PKK. Terrorists fleeing Turkey took shelter at refugee camps in Lavrion under the guise of asylum seekers, especially in the 1980s.

The DHKP-C, founded in 1978 as a Marxist-Leninist party, was designated a terrorist organization by Turkey, the United States and the European Union. Under the name Dev Sol until 1994, the organization claimed responsibility for a series of high profile murders, including the assassination of nationalist politician Gün Sazak and former Prime Minister Nihat Erim in 1980. The group also killed several Turkish intelligence officials. In 1994, it was founded as the DHKP-C after Dev Sol splintered. The group's terror activities remained relatively minor compared to the PKK, another terrorist organization targeting Turkey. The DHKP-C attempted to stage a bloody comeback in recent years by carrying out attacks against the police. In 2012, about 10 years after its last known lethal attack in Turkey, the DHKP-C conducted a suicide bombing at a police station in Istanbul, killing a policeman. It claimed responsibility for a suicide bombing at the U.S. Embassy in Ankara, which killed a Turkish security guard in February 2013. This was followed a month later by rocket attacks against the Ministry of Justice in Ankara and the headquarters of the ruling AK Party. In September 2013, the DHKP-C claimed responsibility for a rocket attack against the headquarters of Turkish police in the capital. No casualties were reported in the three attacks.

The DHKP-C, originally established as a left-wing movement opposed to "fascist regimes in Turkey controlled by the West" targeted U.S. interests, including U.S. military and diplomatic personnel and facilities and NATO personnel and facilities since the 1990s. During the Gulf War in 1991, the organization claimed responsibility for the killing of two U.S. soldiers in Turkey and targeted NATO and U.S. logistical facilities in various attacks. Following those attacks, Turkey launched a massive crackdown against the group in 1992 and an unknown number of its senior leaders were killed in operations in Istanbul. The terrorist organization restricted its activities in the late 1990s, although it made headlines after a series of hunger strikes by its imprisoned members in 1999 that concluded with a violent crackdown by Turkish security forces against the prisoners. The group changed its tactics in subsequent years, using terminally ill people as suicide bombers.