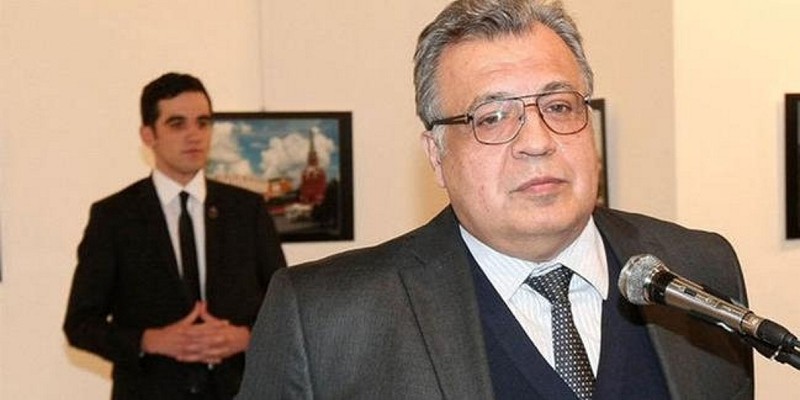 Turkish prosecutors have completed the investigation into the 2016 assassination of Russian Ambassador to Ankara Andrey Karlov, judicial sources said Friday.

Twenty-eight suspects, including Gülenist Terror Group (FETÖ)'s leader Fetullah Gülen, were indicted, said the sources, speaking on condition of anonymity due to restrictions on speaking to the media.

Prominent FETÖ members Şerif Ali Tekalan, Emrullah Uslu and Şahin Söğüt were also included in the indictment. Gülen and Tekalan live in the United States, while some among the suspects were already arrested.

The indictment has been submitted to an Ankara court.

The suspects are accused of violating the constitutional order, being a member of an armed terror group, and deliberate killing with the objective of spreading terror.

The indictment also concluded that the assassination was an act of provocation targeting Turkey-Russia relations.

Karlov was killed on Dec. 19, 2016 by Mevlüt Mert Altıntaş, an off-duty police officer with links to FETÖ, in an art gallery in the capital Ankara. Altıntaş was killed in a shootout with police in the gallery after the assassination.

The indictment says Altıntaş originally planned to kill the ambassador at a dinner for ambassadors hosted by the AK Party on June 27, 2016 but scrapped the plan when Karlov did not attend and went on a trip abroad instead.

Prosecutors say FETÖ and "foreign powers that used the group" aimed to derail bilateral relations between Turkey and Russia through the assassination and "drive the countries to a possible conflict" as well as "creating chaos ahead of July 15, 2016."

The assassination was at a time of thaw between strained Turkish and Russian relations. Since the murder, Ankara and Moscow gradually made progress in rebuilding their ties that were disrupted by the 2015 downing of a Russian fighter jet over the Syrian border by the Turkish military.